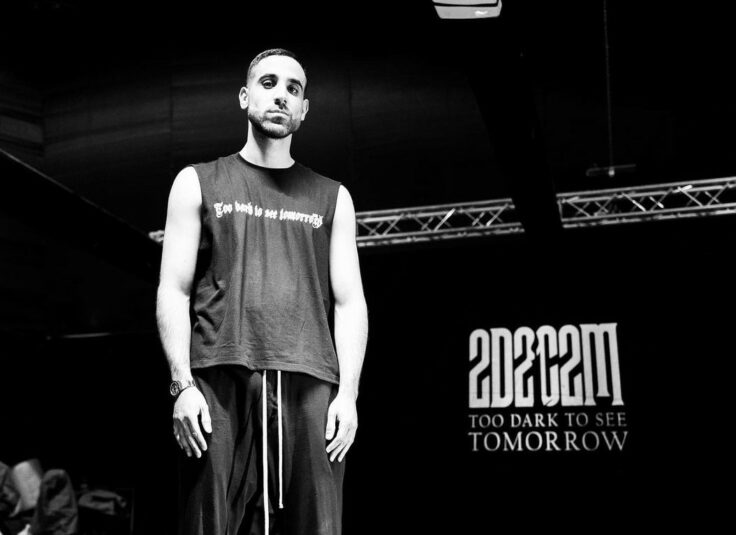 Taking the Kingdom’s fashion scene to the next level

“I find myself in a constant state of novelty, thus I’m always designing,” says Riyadh-based creative director Ahmad Alwohaibi. The Saudi designer established his label Too Dark To See Tomorrow (2D2C2M) in 2015, and the years since have only solidified his mark on the local fashion scene.

The label made its way around the region through pop-up series in Riyadh and Dubai, introducing collections of hoodies and t-shirts adorned with graphics and catchy slogans. Alwohaibi expanded his brand’s repertoire further in 2019, collaborating with Dubai-based skate shop Frame on an exclusive T-shirt to mark Fashion Forward Dubai’s 11th edition.

That same year, 2D2CM set up shop at Sole DXB and in 2020 launched its their Creepin’ Up On You campaign with Alwohaibi curating a number of banners around Riyadh displaying slogans and messages.

“I wanted to stage the show in an art gallery. I shared the idea with my friend Warchieff—who happened to be part of the project later—and he suggested a media production studio.”

Alongside Warchieff—aka Mohammed AlHamdan, the Saudi comedian and star of Arabian Alien—Alwohaidi partnered up with a number of Saudi creatives for the show, including  Riyadh-based photographer Hayat Osamah and film director Taha Baageel.

In the dark dim lit venue, the models flaunted Alwohaidi’s minimalist streetwear looks in a black and white dominated palette. From monochrome activewear sets and two-tone ombré jumpers to baseball jackets and soft-colour knit sweaters, the pieces were equally laid-back as they were rebellious.

Of course, the designer stayed true to his love for symbolism. One shirt read ‘Never thought our culture would become mainstream’ and a scarf was adorned with the phrase ‘If we don’t build we will be destroyed’. Alwohaidi also used a host of natural materials such as wool, cashmere and linen for his collection.

“My inspiration changes from time to time, depending on where I am at in life. Currently, my source of inspiration goes beyond fashion and styles. It’s a real-life inspiration,” he says.