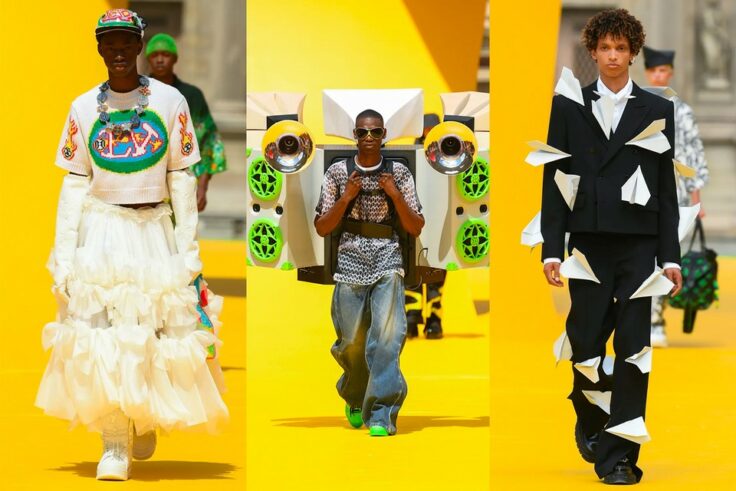 It’s that time of the year again!

All eyes are on Paris as Milan passed the baton to the city of light for the next sequence of Menswear Fall 2023 shows. Like every January, menswear collections are being displayed, and spotlighted, revealing what some of the world’s most esteemed and revered menswear designers have been working on since last time they hit runways back in June.

So far, Gucci’s post-Alessandro Michele collection has been the topic of most conversations as menswear kicked off just last week in the Italian fashion hub of Milan. Held at the heart of the brand’s headquarters, as it usually does, attendees and aficionados alike both followed the much-anticipated event with great attention as the former designer’s sudden exit, after seven distinguished years at the helm of the label, left the whole world wondering what’s left in store for the Florence-born Maison. And it did not fail to serve as Michele’s influence could still tangibly be felt, although re-visited and explored differently in the showcased collection. In our deputy editor’s own words, “this season, Gucci was less romantic and more rock n’ roll.”

Some of the main highlights of this season already include Fendi’s playful re-introduction of its famed it-item, namely the iconic Baguette bag, initially made popular by the American comedy-drama series Sex and the City in the early noughts. Selling millions since its inception on global markets, back then, the reference to the French bread came to exist following similarities in size and shape between the streamlined structured carrier and the narrow loaf. Now, the Italian label quite literally decided to appropriate and harness the item’s preceding reputation by designing a bag, that not only bears a similar silhouette to the baguette but that quite literally mimics its colors, its main features, and length. On the runway at least, the bag served as an umbrella holder although its promoted usage is far from being definitive or strictly regulated. In other words, you can make whatever you want of it, provided you find any other item that can fit inside it.

With Milan Fashion Week officially over and Paris taking up the torch for the next few days, we’ve listed the five shows that we’re fondly looking forward to in the French capital.

Although the vernacular used might not be the most PG, British Grime artist Skepta recently went frantic on his keyboard to share a few fleeting thoughts regarding Louis Vuitton since the passing of his long-time friend and collaborator Virgil Abloh, who was the creative director of the luxury label. According to the London-born MC, the Parisian maison should move away from streetwear and “leave (that) approach at Virgil and do the right thing with the next move,” meaning no disrespect to Colm Dillane, founder of KidSuper, who will be guest designing the upcoming menswear collection, as they both work together at Puma. He then continued by posting pictures of designers Bianca Saunders, Grace Wales Bonner, and Martine Rose — three profiles that he believes could take on the heavy succession of his late friend at Louis Vuitton.

Who the fuck is calling the shots at Louis Vuitton now?

Whether you agree or disagree, it does feel like Skepta is saying out loud what a lot of people must be thinking quietly. With plenty of questions on our minds, answers are seemingly going to be delivered at their upcoming Jan. 19 in Paris. And for those who can’t make it to the show, don’t worry we got you covered. Tune in to the livestream below at 5:30 p.m. GST to catch all the runway action unfold in real time.

Multi-hyphenate artist Daniel Arsham has just announced that he will be debuting his latest collection at Paris Fashion Week. The Chapter 03 collection, from his brand Object Subject, will be his first time showcasing his designs on the runway during one of the most prestigious fashion events in the world.

The details of the show are still being kept under wraps, however, fans of the man with many hats can expect a visually striking display of Arsham’s unique vision, which usually centers itself around a minimalistic and conceptual aesthetic. His work often blurs the line between art, design, and architecture, and his inclusion at Paris Fashion Week only serves as a testament to the growing popularity of his multidisciplinary approach to all ventures he undertakes.

After a three-year hiatus, the cult New York menswear brand is returning to Paris Fashion Week on Jan. 21, where it will be debuting its first-ever and hotly-anticipated womenswear collection. According to designer Emily Adams Bode Aujla, the inaugural collection includes dresses, skirts, silk tops, and lingerie featuring Bode signatures. The new womenswear offering will be showcased alongside its menswear. Considering that a good portion of Bode’s customer base are women, the move is one that we should have all seen coming.

In the past few years, Casablanca has grown into one of the most promising and exciting labels around. Its blend of resort wear and silky looks have propelled founder and creative director Charaf Tajer to the highest stratum of the industry at a pace many look up to and take notes of.

Tajer is set to debut his latest collection, “For the Peace,” via a runway format on Jan. 21, and while not much has been revealed about the new offering, a teaser clip posted to the brand’s official Instagram suggests that it may be influenced by the Middle East. In addition to being born to Moroccan parents, the Paris-born designer has spent some time in Qatar, the UAE, and even Syria in the past couple of months, so it’s not totally surprising that he would draw inspiration from his travels— something that continuously informs his designs.

The Caribbean Couture brand founded by Lisi Herrebrugh and Rushemy Botter in 2017 has become one of the most talked-about new brands during Paris Fashion Week. The sustainable label has grabbed the attention of fashion lovers the world over after taking home the grand prize of the 2022 Andam Fashion Award, beating out 12 other designers. The menswear brand will be showcasing its newest collection on Jan. 20— last season, during their spring 2023 show, the designers sought to bring “water to the runway” via water-filled condom gloves, and dresses made from kelp and edible water bubbles. Safe to say, we can’t wait to see what they do next.