The kingdom on a rise

Despite kicking off two weeks later than originally planned, Riyadh Fashion Week was inaugurated with a bang. The Kingdom’s long-awaited fashion event took place at the swanky Ritz Carlton hotel in the nation’s capital with a host of international guests in attendance.

Princess Noura Bint Faisal Al-Saud, president of the Arab Fashion Council’s Riyadh branch was joined by designers, models, and influencers from all around the globe to witness the historic moment. “The [Arab] Fashion Council is trying to bring the fashion industry in Saudi Arabia to whole new level, a whole new industry”, she said in a statement.

Headlined by international names like Jean Paul Gaultier and Roberto Cavalli, and regional labels like Arwa Banawi’s The Suitable Woman – the inaugural week cemented Riyadh as one of the region’s burgeoning fashion hubs.

In line with the Kingdom’s conservative rules, the shows were strictly open to women only, and photography was limited as per the nation’s guidelines. Despite this, the event was a huge milestone for the kingdom, and we’re excited to see what else there is to come.

A second edition has already been scheduled for October (we’ll keep you posted on that). But for now, here’s a round up of all the major highlights from this week. 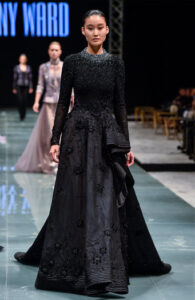 Saudi designer Arwa Al-Banawi, showcased her collection in her native country for the first time, with tailored power suits designed to empower women. 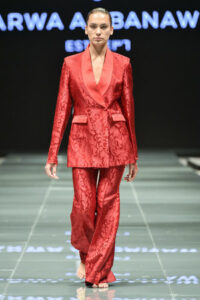 Jean Paul Gaultier held his first ever fashion show outside of Paris. 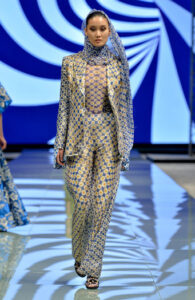 UAE-based designer Aiisha Ramadan presented her Saudi audience with a collection of her best pieces from the past year, calling it The Golden Age of Aiisha. 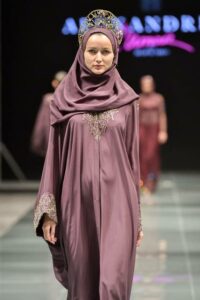