5 Quiet Beaches to Runaway to

The dreamiest spots from Egypt to Oman

There’s nothing quite like getting your dose of Vitamin D while lying on the sand overlooking turquoise water. It’s a no-brainer—until someone’s screaming child interrupts your relaxed vibes.

Thankfully, the world is full of unspoiled land—among them some of the most beautiful, and quietest beaches around. Sure, they might require an extra ride on a ferry to get to, but the views and solitude make the trip worth it.

From Egypt to the Philippines, we’ve rounded up the dreamiest spots to check out for your next sunny escape.

Home to one of the world’s most dangerous submarine sinkholes, Ras Abu Galum is known to scuba divers around the world. But even if you’re not into diving, and looking to spend a day overlooking some of the bluest waters and taking in mountain views, this is the place to be. The beach is located on the southeast Sinai, just a few kilometres away from Dahab.

Off the coast of Oman, Masirah is a rocky island known for its clear waters and is home to four different species of turtle. Tourism to the island is still not huge, so it’s a really good time to take a trip and take in the views.

The Philippines is known for its many many islands, and El Nido is the perfect one to visit for a super-quiet escape. If you’re looking to chill, catch a tan and enjoy a quiet afternoon surrounded by the sea, sand, and coconut groves Pasandigan Beach is the place to go. 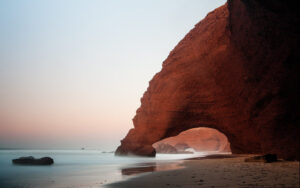 Legzira is an 8 kilometre long stretch off of Morocco’s Atlantic coast. Located between Mirleft and Sidi Ifni, the beach is most known for its two naturally formed stone arches. Only locals—and the occasional tourist—know of this place, so you’ll more than likely find no one else at the beach except yourself.

Gemlir is an ancient island located on the Mediterranean coast near the Turkish city of Fethiye. It’s mostly known for its churches and ruins, but the beaches are not to be missed. It’s the perfect place to peacefully take in nature and enjoy a quiet picnic at the beach.