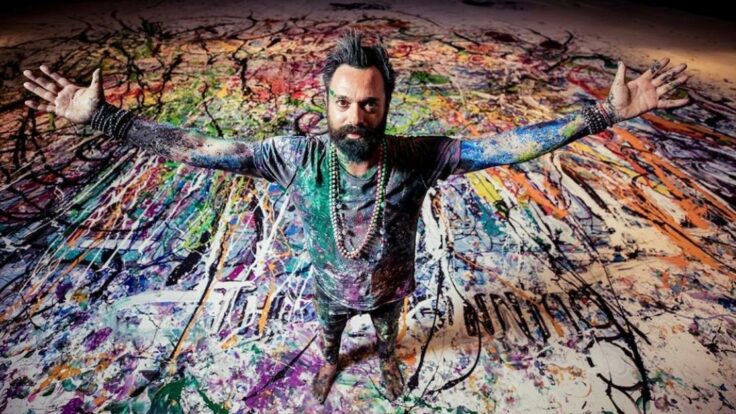 A UAE-based Company Is Sending Art to the Moon

If there’s one thing we didn’t expect to happen this year, it’s art on the moon. But that’s exactly what Selenian, a UAE-based company that specializes in the curation of art in space is doing, alongside NASA and Astrobotic, a commercial space company.

With the clear intent of it permanently staying there, the artwork, titled ‘We Rise Together, By Moonlight”, is Sacha Jafri’s latest brainchild. The British-born artist made sure that his creation would resist any lunar conditions by using an aerospace-grade aluminium gold plate as a canvas for his creation. The piece will be revealed to the world in a press conference next week before disclosing the more intricate details as to how this astronomic venture came into place and when we can expect it to launch out of space.

“Our ultimate goal is to be the gateway portal to Space and the Moon for physical and digital art assets, through artworks, NFTs, tokenization and the Metaverse, in turn giving back to the humanity community with purpose and utility here on Earth,’ said James Khazaei, co-founder of Selenian.

It has also been reported that five NFTs will also be accompanying this unprecedented release in order to commemorate each stage of the upcoming mission. Although the project seeks to discover and explore the world that is tangibly outside of ours, all parties involved have made sure to keep humanitarian action at the centre of the undertaken task. Indeed, a percentage of the funds raised for the moon mission have been pledged to charities that focus on four major issues that the team aims at tackling – namely equality for all, sustainability, education and health.

“Our future is not technology, our future is human; with expression and embrace comes our new world, aided by technology but driven by humanity. The placement of my moon landed artwork aims to reconnect humanity to ourselves, each other, our creator and ultimately to ‘The Soul of the Earth’.  My hope is for a humanity that vibrates at a higher frequency, that embraces humility, understands the power of universal consciousness, realizes the fragility of our planet and engages in the beauty that surrounds us,” said  Jafri.