We’ve all been taught that bad taste is just plain bad, and some clothes should simply never be worn. But over the last few seasons, designers have gone against the grain and embraced “ugly fashion”. Whether you’ve seen platform crocs at Balenciaga, exaggerated volumes at Viktor&Rolf, overwhelming layering at Comme des Garçons or intentionally dirty sneakers at Gucci, it’s safe to say that bad taste has become the trend du jour.

For 26-year-old Cairo-based designer Ahmed Serour, camp fashion isn’t something he sees as ephemeral and playful though— it’s a bold statement about his identity. Inspired by lower-middle class kitsch Egyptian fashion, his clashing patterns of layered fuchsia, neon blue and electric green prints translate something deeply significant about what it means to be a millennial in 2019 Egypt. “The confusion in the aesthetics explores how we [young Arabs] fail to identify ourselves”, he explains. 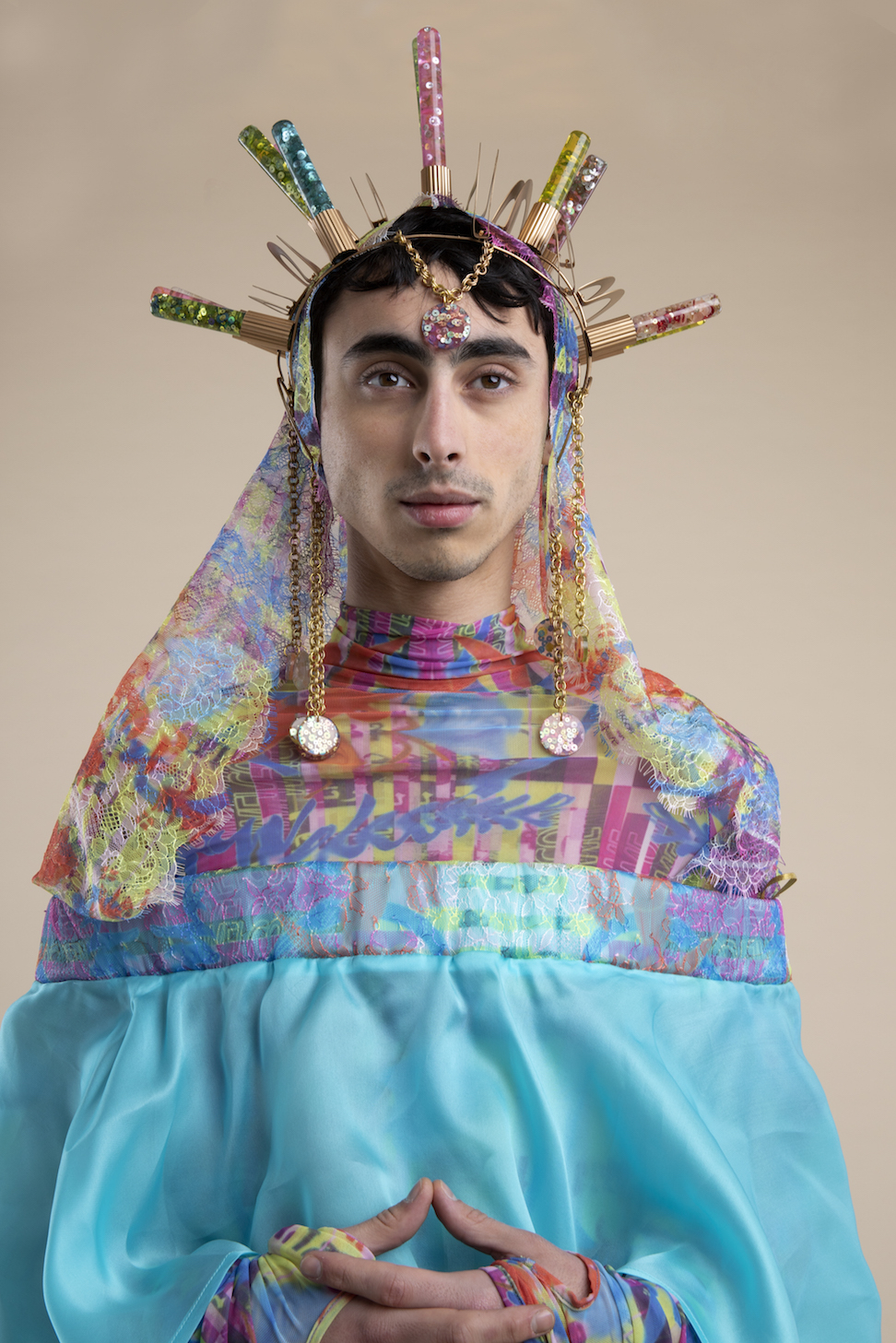 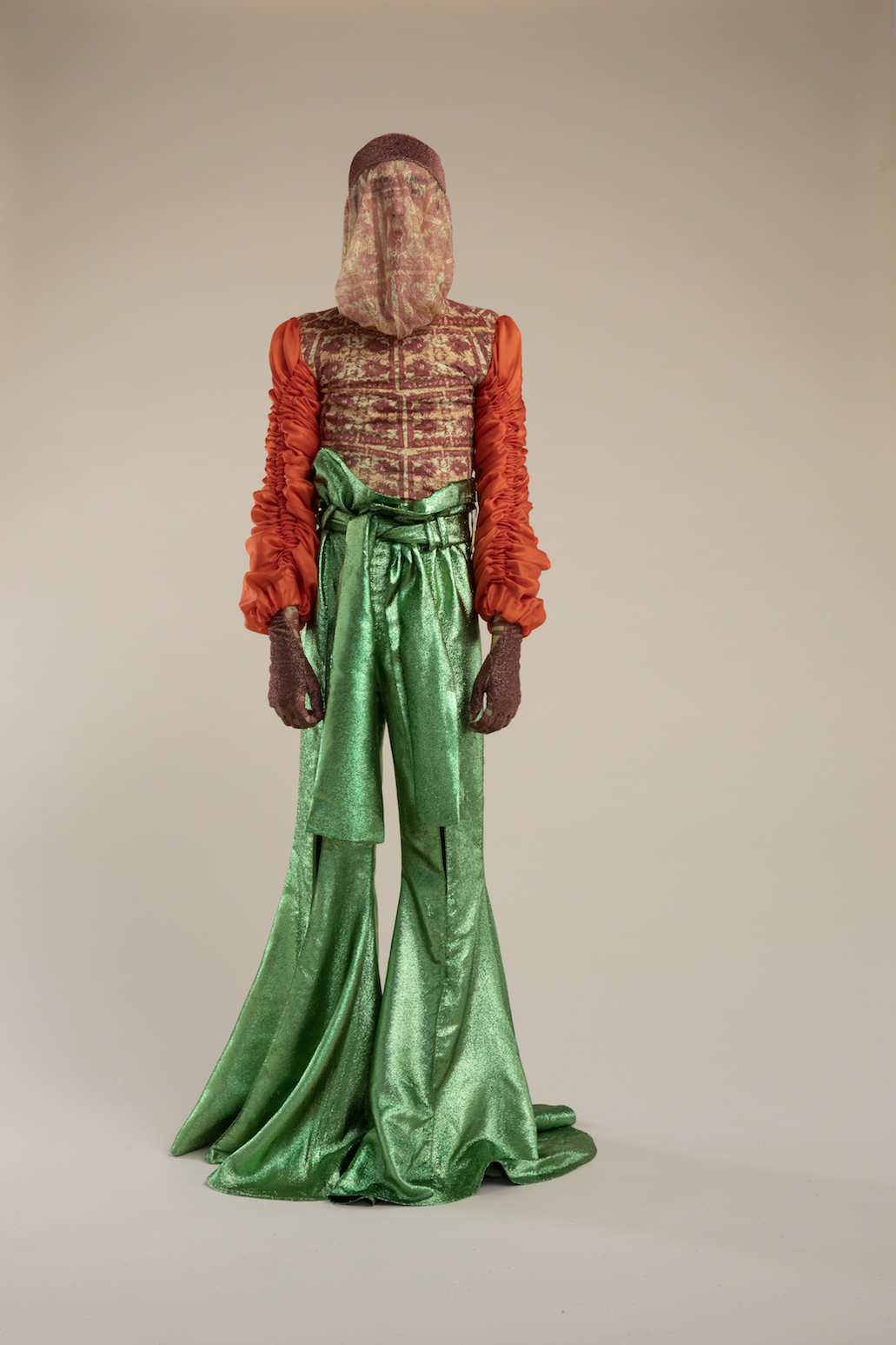 Using his signature costumey style as a tool of contestation, Serour seeks to challenge the status quo in his country. “My designs are all about questioning”, he says before adding, “I question history, colonialism, religion, norms, censorship”. The young designer hasn’t found the answers to all his existential questions yet but for now, he is busy deconstructing his mind. And his latest collection, NonEGYboi, is an exploration of Arab masculinity. 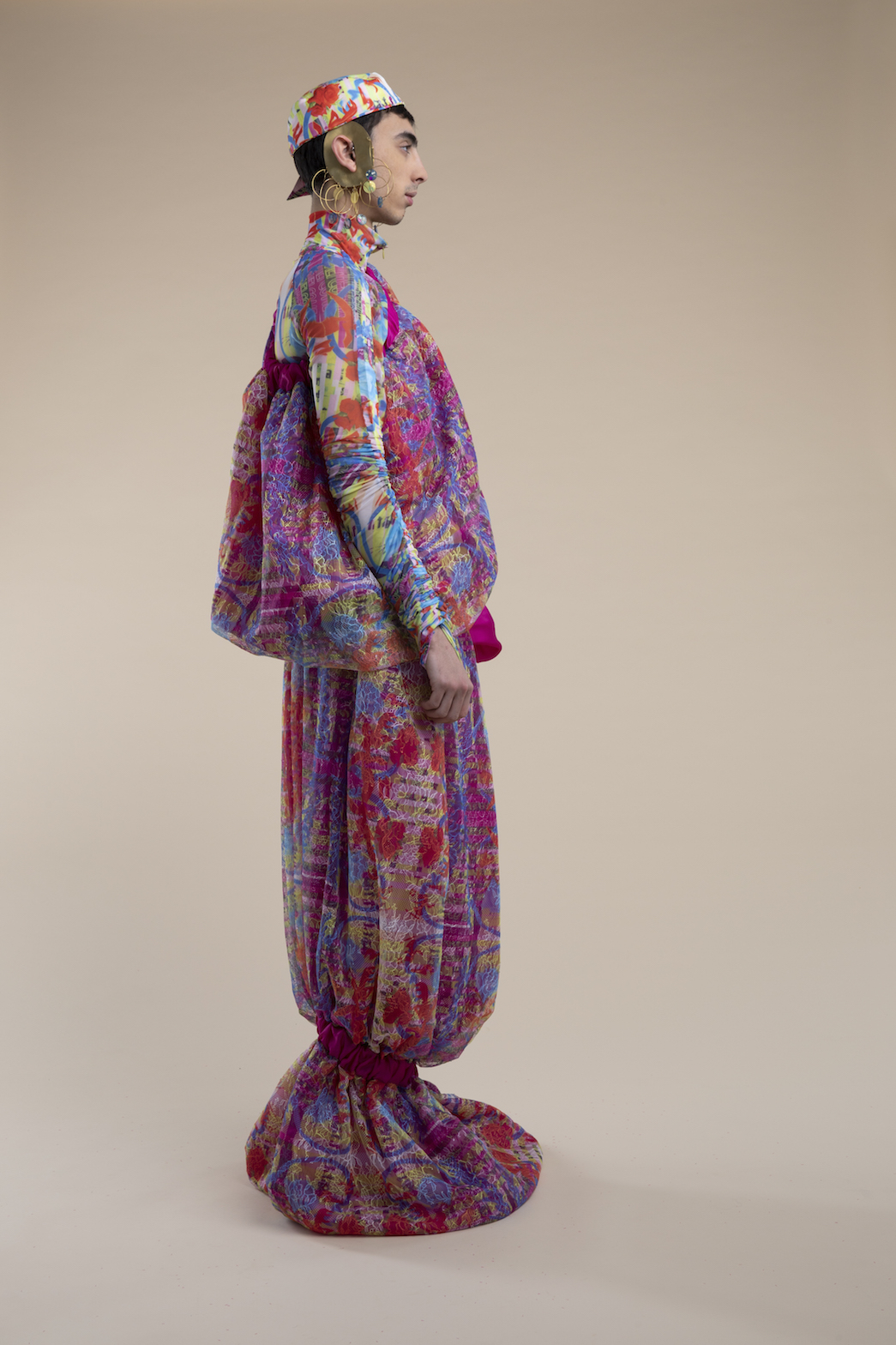 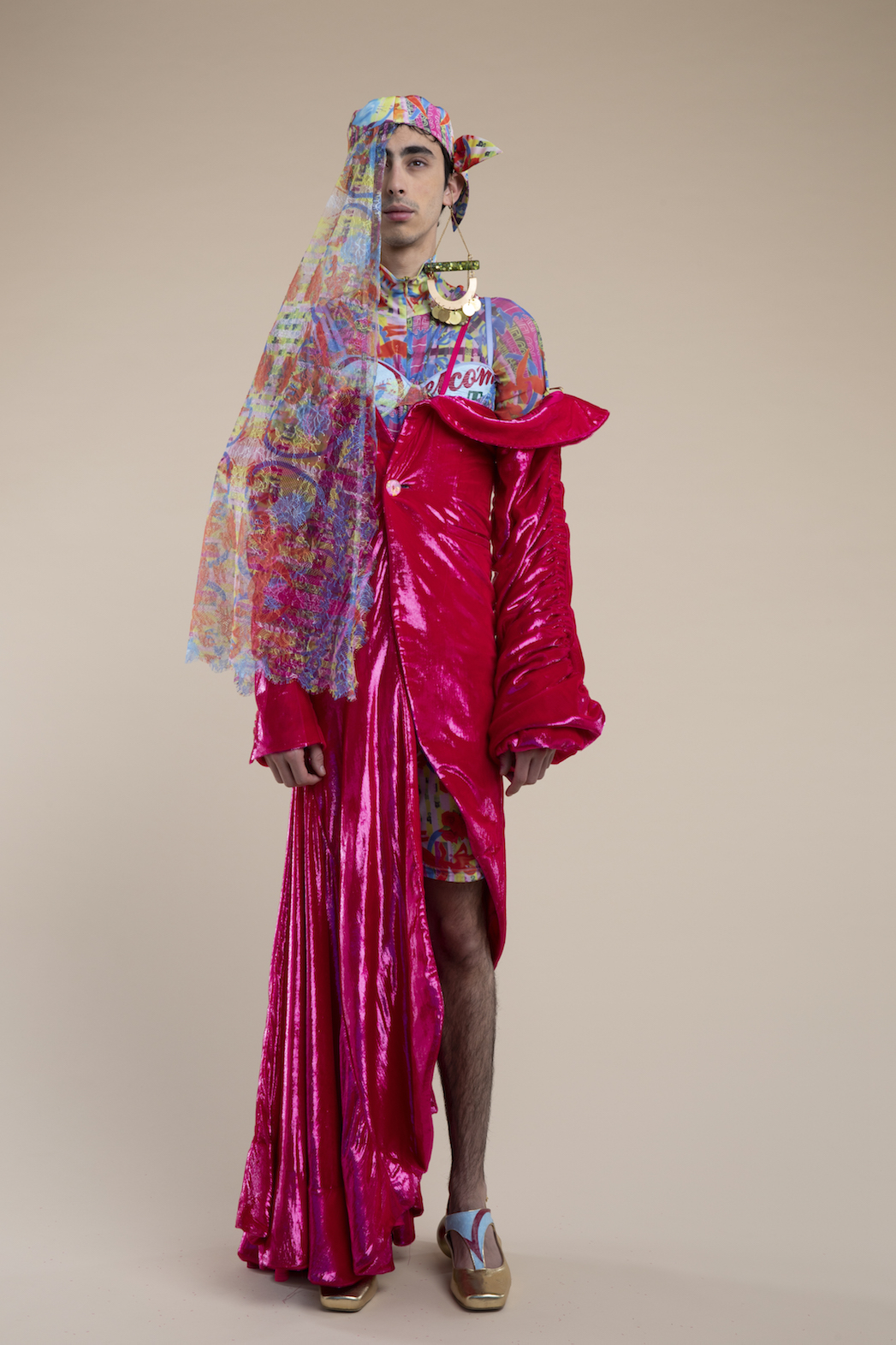 Although camp taste isn’t necessarily exclusive to queer identity, there is an undeniable relationship between the two. With his unapologetic and over-the-top approach to clothing inspired by Egyptian male belly dancers, Serour redefines the Egyptian man, conceptualising him as unconventional and fighting the pressures of the gender binary.

The result of Serour’s dissident work is what he calls “trash couture”,  in other words, the meeting point between ugly and excellence. It’s true this might sound like a dichotomy, but that’s because Serour’s work is anarchical, evolving beyond any confines and erasing the obstacles preventing young Egyptians from showing who they truly are. As he notes, “I want to create a new postcard representing the real dystopia and cultural limbo Egyptians millennials face trying to be their true self”. 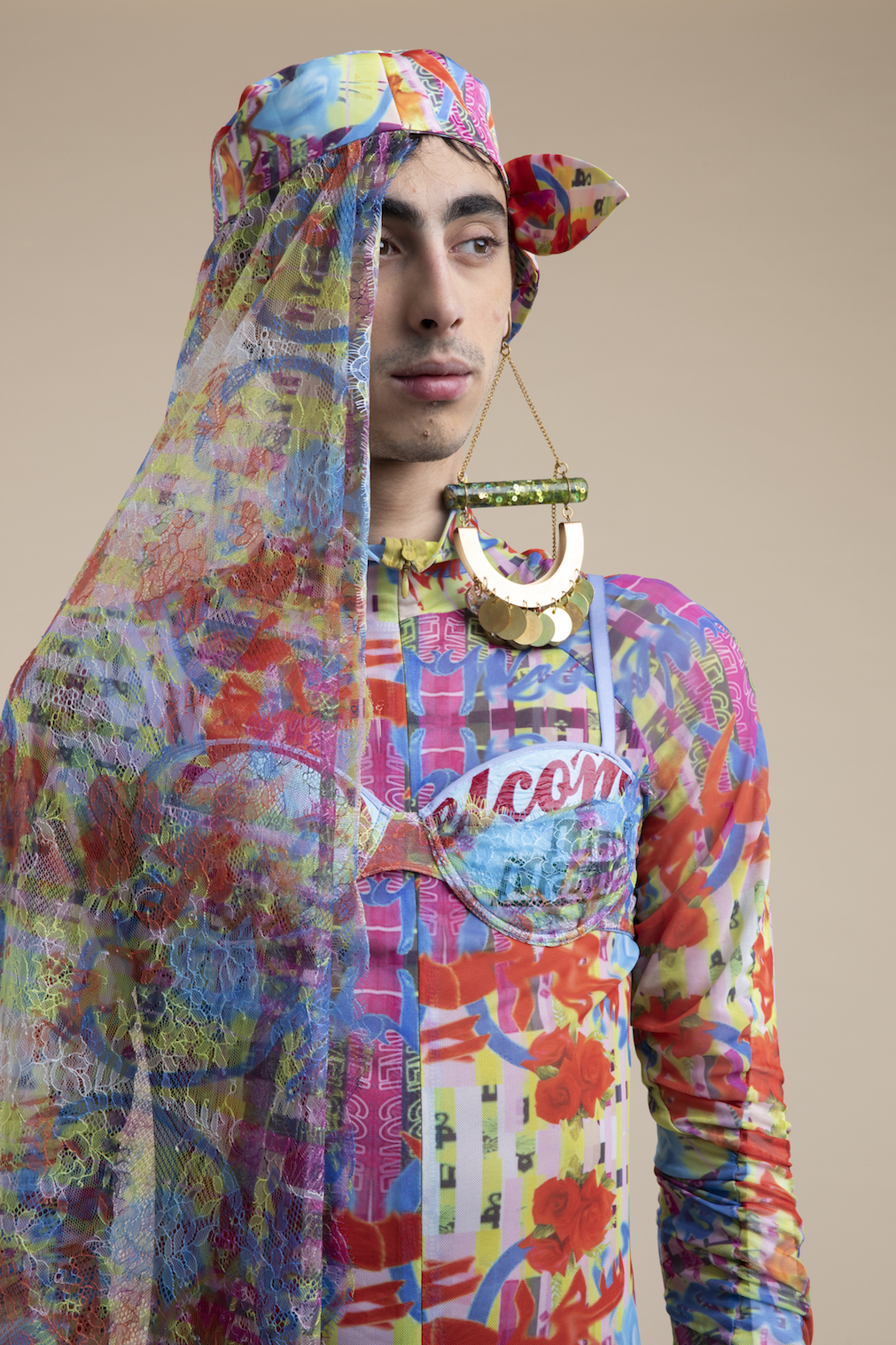