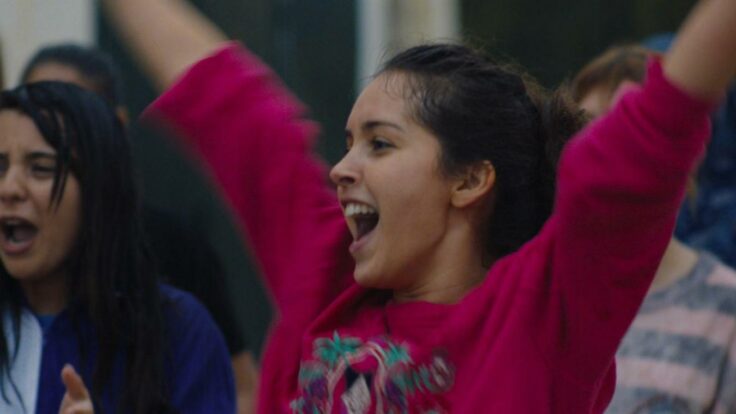 “What I like the most about acting is how much fun I have doing it”, excitedly proclaims 27-year-old French-Algerian actress Lyna Khoudri, who stars in ‘Papicha’, Mounia Meddour’s new film representing Algeria at the Oscars (the most successful female-directed African film to-date in France).

Set in Algiers in the 1990’s, the film portrays Khoudri and her university girlfriends putting on a fashion show, while they revolt against the rise of fundamentalism in the country. Her portrayal of Nedjma is set against a background of hostility and tension from the Islamists and her entourage.

It’s a clever, heartfelt exploration of the Algerian experience during the “Black Decade”. The movie unravels the events that followed the heavily under-documented civil war, whereby 200,000 people were killed, and sheds a light on the fierce faces of the country’s young feminist movement.

Speaking to Khoudri, it becomes clear that the trait she shares the most with her character Nedjma—the independent and daring student fighting for women’s right to self-expression—is her unfaltering quest for freedom. “I don’t like too much structure”, she emphasises.

Khoudri confesses that she never planned to become an actress, “I started taking drama classes during my last year of high school just to mess around with my friends”, she says, “but it wasn’t serious. A year later, I started university but I quickly quit and started auditioning”.

Without forcing it, Khoudri managed to find a way to dabble in acting, under her own terms. In 2017, she won the Orizzonti Best Actress award at the Venice Film Festival, for her role in ‘The Blessed’ (‘Les Bienheureux’), and she was nominated last week for Best Emerging Actress at the French Césars.

Khoudri is set to become one of France’s most in-demand young actresses. And although she grew up as a French-Arab in our post 9/11 world, she isn’t trying to channel activism in her acting. To her, it’s art that is the true seed and catalyst for change.

“I’m tired of speaking about issues of racism and representation. I think that as long as we continue speaking about that, these issues won’t be gone. Feeding the debate doesn’t mean solving it”, she boldly declares, confessing that staying authentic to who she is is paramount to her. “It’s not my job to resolve political problems”, she continues.

Living in the working-class outskirts of Paris, where police discrimination and brutality is systemic, Khoudri knows what it means to genuinely protest and revolt. “But nothing changes”, she says, “The best response is to continue existing and simply take place with our talent and work, and they’ll get used to us”.

Wildly talented and indisputably on a fast-rise to fame, Khoudri doesn’t want to overthink how she uses her voice, but her message is clear: “I just have to be me”.