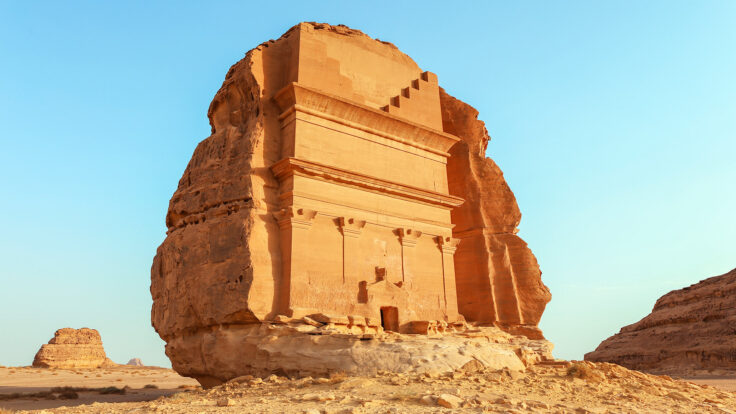 It’s quite hard to explain what exactly is going on in Saudi Arabia at the moment. For so long, and especially in the last century, the Kingdom could only be seen through a unique lens, one that only mirrored its safely kept, and meticulously maintained, image of Islam where conservatism, in the plurality of its forms and interpretations, would often hinder most alleyways leading to the development of a cultural arena of its own.

In the past five years or so though, things have been changing, with most of what used to be illegal or socially forbidden now being deemed permissible and even promoted in some cases thanks to a string of reforms spearheaded by the Crown Prince Mohamed Bin Salman (MBS) as part of the country’s ambitious Vision 2030 program. Given the intense wind of change that’s blowing through the Gulf State, from a regional perspective, a new era is seemingly upon us with Riyadh slowly turning into the uncrowned capital of the region, placing the youth and the idea of leaving a stamp in the future, at the forefront of all of its ambitious projects.

We often hear, read, write, and watch a lot about Saudi, including myself. So far, anyone I know that has recently visited seems to come back impressed by what they have seen, galvanized by what they have felt, and excited by what prospects are in the works. To the few older friends I know that have also paid the Kingdom a visit lately, they often compare it to the fall of the Berlin wall, where from one night to the next, society as a whole opened up and liberalized, habits changed, and morale values loosened, all of a sudden ready to host and spotlight the abundance of creative talent available from within the country.

Last week, MILLE was invited to first-handedly experience the above, through a 72-hour journey in AlUla, the Northwestern City in the Madina province, where art, culture, and entertainment blend in beautifully with centuries of history. 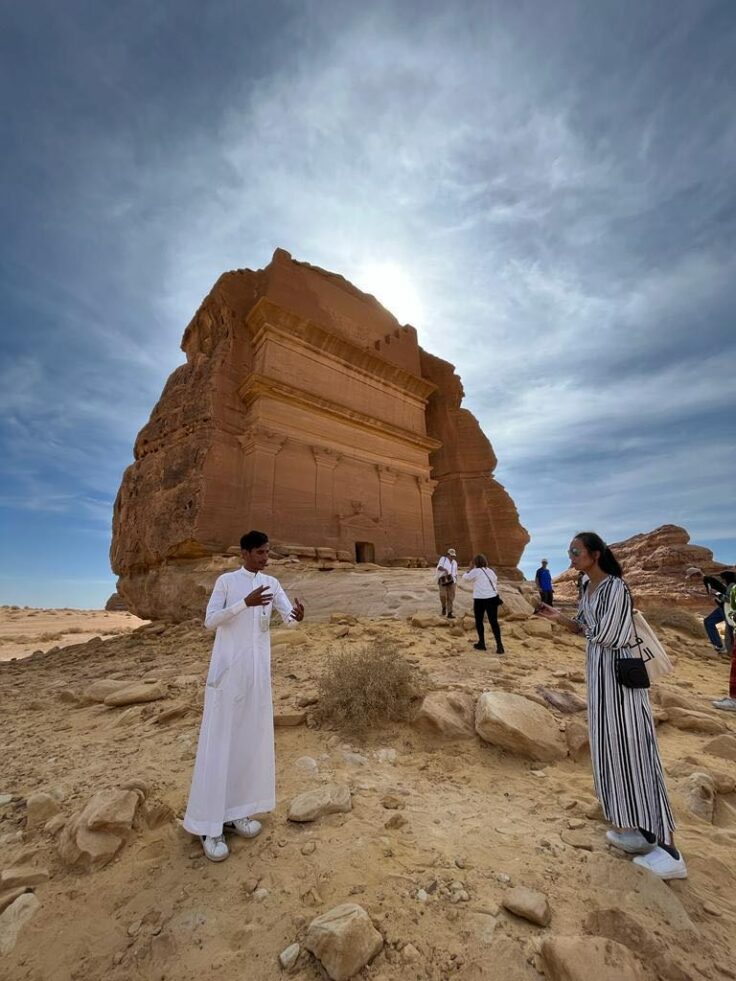 Locals and visitors alike are both blown away to see the huge transformation the province went through in the past eight years. When talking to residents, almost all reminisce the time when they used to claim to be from Madina as no one, most Saudis included, was able to pinpoint AlUla on a map whereas now, it’s become one of the Kingdom’s most promising hotspots, attracting tourists from all areas of the planet to discover one of the nests of Nabatean civilization on top of the slew of era-defining ventures in the decades to come.

Home to Hegra, an ancient city that’s remained untouched for millennia— and that will soon house awe-inspiring large-scale works steeped in thousands of years of natural and historical heritage, that will permanently be placed in Wadi Al Fann —past, present, and future coexists simultaneously in an unparalleled location that should be on everyone’s bucket lists.

Wadi Al Fann, or “Valley of Arts” in English, is one of the main landmarks of AlUla’s transformation where layers of humanity are piled up to form a centuries-spanning collage of civilizations. Taking you on an unprecedented journey through time, that marks the beginning of a new cycle for mankind, the once underwater city will soon turn into a grand scale monument epitomizing our era in a way that will adamantly echo to future generations. Commissioning artists from all five continents, featuring the likes of American experimental artist James Turrell, contemporary Saudi creative Manal Dowayan, and Hungarian-American conceptual multi-hyphenate Agnes Denes, Wadi Al Fann will serve as a natural canvas now and until forever.

Opening to the public in 2024, we were fortunate enough to be able to take the whole scenery in, en avant-première, and witness the surrounding views and landscapes develop, in their early stages, and potentially become another one of humanity’s grand-scale landmarks in the same way the pyramids of Egypt are. To which extent are the involved bodies willing to deliver? Who knows?  In fact, probably no one does which makes AlUla’s progress even more exciting, and given the efforts put in and shown so far, it is clear that the Nabatean will become one of the epicenters of a changing region and beyond. 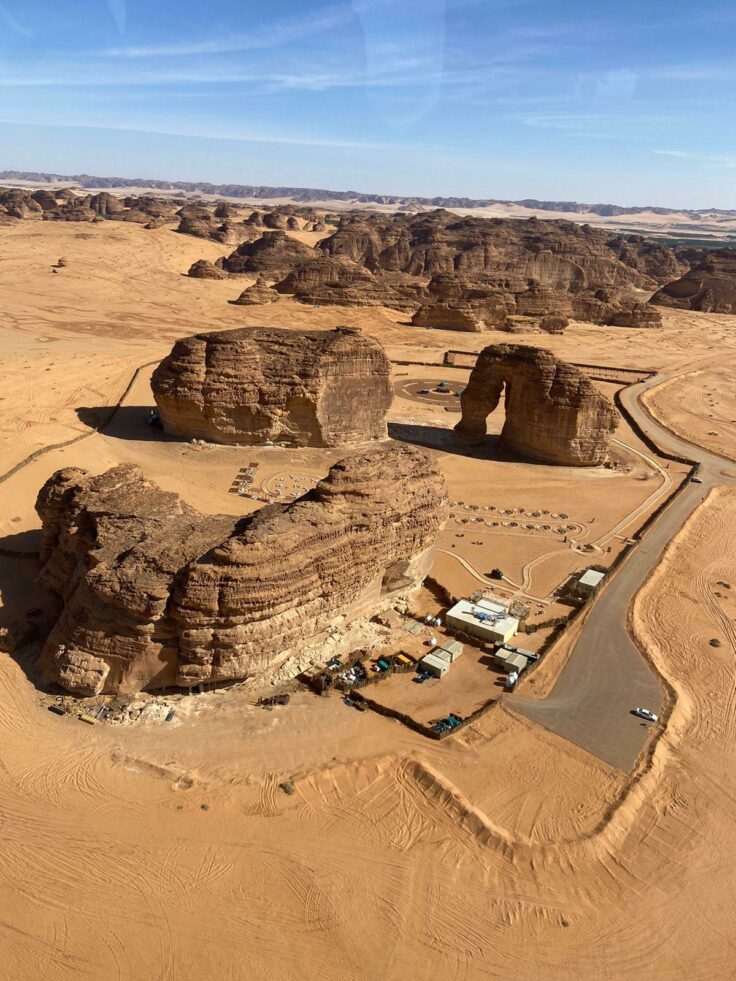 Many places in the Middle East have tried to claim the title of capital of the Arab World in the past, expressing the explicit will on wanting to become a land of opportunity and catalyzing chances, and as much as we’ve seen several places try to walk the talk and crown themselves with that prestigious label, Saudi Arabia, as seen through AlUla, is doing things differently, carving a lane of their own that’s never been seen or done before. Regardless of background, ethnicity, or language, everyone is invited to showcase their talent and vision of arts in the Northwestern province. In our few days visiting the land, we were lucky enough to stumble across a world premiere concert, titled “Nine Songs” and spearheaded by Chinese-American singer Rui Fu, in what was since dubbed as one of the inaugural activities of Wadi Al Fann.

The multi-sensorial concert, sponsored by the Royal Commission for AlUla, invited instrumentalists from all over the world to perform in a celestial decor, proving how what was initially promised and expected to be set up mere years ago is actually happening, which is turning AlUla and more specifically Wadi Al Fann, into a real beacon of culture in the Arab World.

It’s undeniable that Saudi Arabia is moving at a fast pace, the fastest we’ve probably seen since our supposed Golden Age. As Arabs, young or old, it blows pride in those that have luckily been able to experience it.

All of this is to say that Saudi Arabia might embody the new cool, the new place to be, and the new place for new challenges and opportunities, all at once. Whether you’re a fan of it or not, that doesn’t matter, because it’s happening either way. For that reason, here are a couple of tips on what to do and where to go if you’re ever planning on heading to AlUla in the months to come.

Nestled in the center of the desert, just a few minutes away from the iconic Maraya building, Banyan Tree has made AlUla one of its newest homes. The iconic chain of hotel resorts provides guests with the ideal retreat to disconnect from everyday life and enjoy a peaceful setting where everything is made for visitors to not even potentially feel a single ounce of stress throughout the whole duration of their stay. With a number of mouth-watering restaurants present on site, that are all worth the try by the way, spas, gyms, and cafés, if you’re looking for a battery recharge in an enchanted site that will awaken all of your senses, then Banyan Tree AlUla is where you want to head next.

Co-founded by Oliver Ripley, Kfir Levy and Eduardo Castillo, who met at Burning Man, Caravan by Habitas AlUla is ideal for adventure-seekers who prefer the thrill of sleeping outdoors. Comprising 22 trailers parked around massive tents outfitted with cozy beds, a kitchenette, toilet, shower, and a private outdoor deck, the glamping retreat is the ultimate chance to commune with nature and unwind. Don’t forget to take advantage of the site’s full roster of activities like ping-pong, yoga, and outdoor cinema. 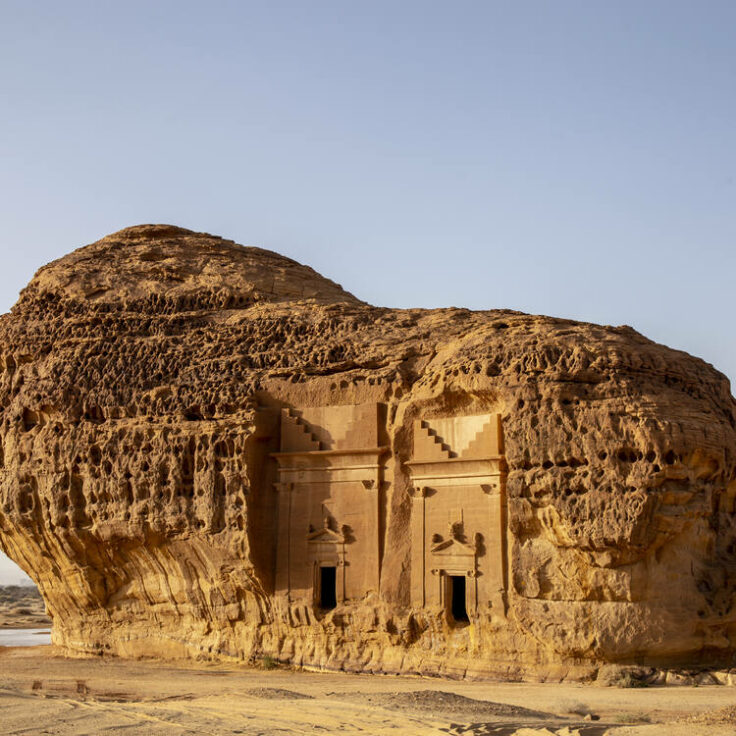 Nicknamed “the second Petra,” Hegra is Saudi Arabia’s first UNESCO-recognized location, and home to several vestiges of Nabatean times, archeological sites, tombs of former rulers, and places of past everyday life. Mentioned a handful of times in holy texts, Hegra is a must-see for anyone even remotely interested in history and definitely a must-see if in the AlUla region.

Meaning “mirror” in English, Maraya is a glass-made concert hall erected in the middle of the desert. Whether you’re just passing by, attending an event inside, or feeling like trying the restaurant inside, you’ll be stunned by what the very Instagramable location has to offer from the outside to its beautiful inside decor. Fun fact: The Guinness World Record recognized Maraya as the largest mirrored structure in the world thanks to its 9,740 square meters of glass.