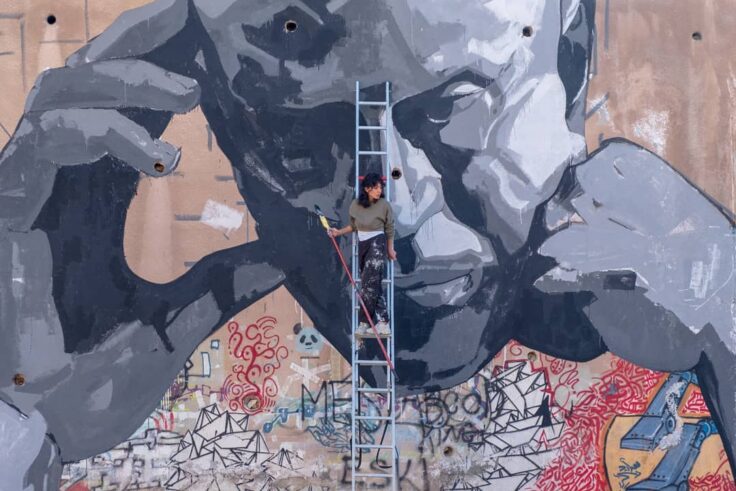 Miramar is the Artist behind Amman’s Street Art Revolution

This young Iraqi is putting the Jordanian capital on the map

Jordan might best be known for Petra and the Dead Sea, but Amman (it’s capital city) is becoming synonymous with its thriving art scene.

Street art, which was predominantly a medium used in Europe and America in the 70s, is now globally accepted as one of the most democratic art movements to have ever existed.

But in ever-competitive cities like New York, London, Paris and Berlin, authentic art movements are reaching a saturation point. As gentrification accelerates, living on the edge of poverty is slowly becoming the norm for emerging artists, who aren’t finding the freedom to be creative.

The art scene in Amman is still in its early days, and is relatively underground, which offers young artists the unique opportunity to have space to experiment and quite simply… exist. And although street art is technically considered a criminal offence in Amman, the city’s openness (Amman has constantly welcomed regional refugees) has turned the scene into an artist-driven, welcoming space for up-and-coming artists.

“I haven’t faced any challenges yet with the police”, says 22-year-old Amman-based Iraqi artist Miramar Mohammad Hussein Ali Al Nayyar. A self-taught artist, Miramar—whose parents are both artists—was raised a creative child. “I realized that painting was feeding a need that I didn’t know I had. It was very spontaneous and that feeling of spontaneity proceeded until it engulfed my days and became my life”, she says.

Having started out painting in her studio, she quickly felt the need to use something much bigger as her canvas. “The larger the walls, the lighter I feel”, as she puts it.

As the youngest female artist to have ever produced works on cityscapes in Amman, Miramar is obsessed with painting larger-than-life portraits on the city walls. “Painting faces introduces me to infinite possibilities of feelings”, she explains before adding, “but painting in public can be very restricting sometimes due to being always surrounded by observers and receiving comments and whatsoever”.

Art is Miramar’s therapy, a medium which has provided her with immense solace. But on the streets, creating art is her weapon, and a practice through which she hopes to unite people. “I’m not only painting for myself now, but for the public as well and that sparks a sense of responsibility and sensitivity towards myself and others”.