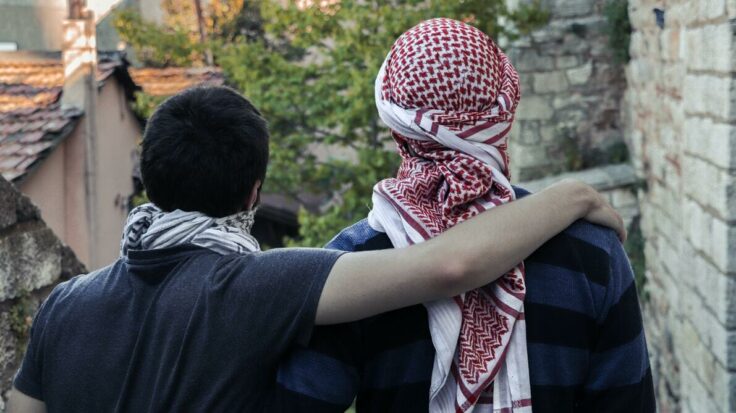 Breaking Down What it Takes to Be a Rajel Today

“Yassine, koun rajel; Yassine rajel houwa al kalima; Yassine enta rajel dl’dar” These are a few of the phrases I grew up hearing, and it’s  safe to say that they’ve carved a great deal of who I am today. For the non-Arabic speakers, they’re all variations of “be a man”.

“Rajel” is the literal translation for “man” in Arabic. But as simple as the word may seem at first sight, the reality of it is still quite different. The term encapsulates a wide range of meanings, interpretations and heavy connotations that are almost impossible to dissociate from the initial unit of language.

What is usually understood, or expected, embraces a definition of masculinity that might be relatively comforting for some but also very distressing to others. And finding balance between both is a journey that many are still struggling to embark on.

Correlated with the idea of being an alpha, the concept of being a rajel carries the values of being brave, strong, straightforward and protective, leaving no room for emotions, feelings and any kind of intimacy to transpire or prevail in any way.

To be fair, it wouldn’t be all silly to label this idea of masculinity as toxic. Although many find peace in it, it’s worth remembering that the moment anything is imposed, especially from a societal perspective, immeditately becomes negative as it suffocates all other forms of behaviour.

In this case, the erasure of other iterations of masculinity becomes threatening and deadly. Not only in principle but also in the real life, the one that, arguably, matters the most. Thing is, whenever existing as man strays away from the socially agreed definition of being a rajel, you’ll find yourself being perceived as weak, vulnerable and exposed to the myriad of dangers associated with being at the adverse of being manly – understand feminine.

In this world, being feminine is no good. It means being preyed upon. And a man considered as being feminine is probably the epitome of losing all of yourself, your manhood, although there’s nothing inherently wrong with it. It becomes a growing lethal bubble with no way out. And don’t wait for it to pop to realise it. It’s a whole dichotomy that really is just unhealthy. In an ideal world, we’d embrace it, explore it and if anything, it’ll just get you closer to others – and whether it’s as friends or lovers you’ll never lose from it.

In this case, masculinity should also be seen as a spectrum. There’s no right or wrong way of being yourself. Let’s forget orientalist and patriarchal standards in which one should be one thing, behave in one way to be seen as another and just do you. Don’t deny yourself from breaking up, having feelings, crying, sobbing, being hurt and for people to see it. Feel no shame.

With so much weight on your shoulders and although it can be quite painful at times, everyone deserves to be healthy from the inside out. So chill. Breathe and let yourself go.