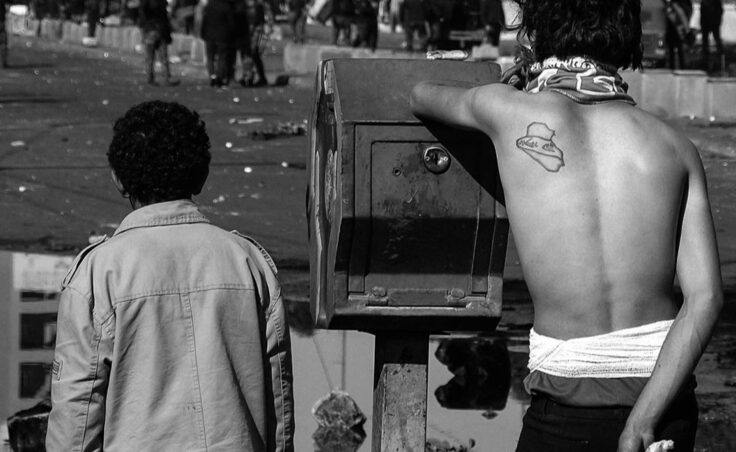 First it was Algeria, and then it was Sudan, Lebanon, and Iraq. The Arab world was in the throws of protests for practically all of last year, and despite the evident decrease of media coverage in recent weeks, demonstrations are still alive and well.

Dubai-based gallery Gulf Photo Plus is still paying attention though. For their latest exhibition, the gallery brought together photographers from the effected nations for a group show.

Entitled ‘All What I Want is Life’, the exhibition places their work in the spotlight in an effort to retract the effects of the sensationalist images publicized by media outlets. Some of the participating artists include Myriam Boulos from Lebanon, whose photography became synonymous with the Lebanese uprisings that began in October 2019. The publicized photos, which made their way to Time magazine, painted an image that was aggressive, and violent – an inaccurate portrayal of the protests, which were in fact some of the Middle East’s most peaceful. Boulos is joined by photographer duo Tamara Abdul Hadi and Roi Saade, who also heavily documented the Lebanese protests, highlighting the solidarity of the people.

Amir Hazim and Abdullah Dhiaa-Al-Deen’s photography also made it to the show, the photographers who hail from Baghdad, were prime figures in the documentation of Iraq’s protests. Armed with his iPhone, Hazim put himself on the frontlines of Baghdad’s Tahrir Square, capturing the most pivotal moments of the protests that erupted last October.

His black-and-white photographs (which he published on his Instagram) proved to be an act of perseverance by Hazim, as the protests grew to become violent and internet access was frequently cut off by the government, he became one of Iraq’s leading photojournalists overnight.

The same can be said for Fethi Sahraoui, who was one of the leading photographers capturing Algeria’s protests in February 2019. Chiefly shot in black-and-white, Sahraoui’s photographs landed in the pages of The New York Times, alongside other major publications. But more importantly, Sahraoui documented a side of Algeria that has rarely been seen, placing a particular focus on the youth that largely pushed the protests forward (and ultimately led to the ousting of former president Abdelaziz Bouteflika).

Joining him is the woman behind the most symbolic photograph to come out of Sudan during the revolution, Lana Haroun. The young photographer shot the iconic photograph of Alaa Salah, a 22-year-old architecture student wearing a white thobe, standing tall as she recited poetry to a massive crowd of fellow protestors. Haroun is joined by Sudanese photographer Salih Basheer.