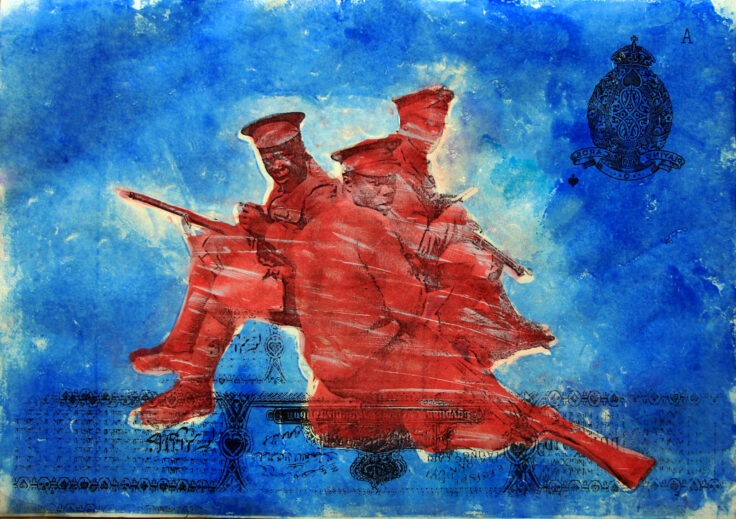 London’s Sulger Buel Gallery is putting North African artists in the limelight, and the Arab Slave Trade isn’t being left out.

Sudanese-Egyptian artist Amado Alfadni, who is one of five artists to be exhibited, is making sure that the often-hidden part of our history is acknowledged.

Libyan curator Najla Al-Ajili (who is also the founder of Noon Arts Projects) is behind it all. Entitled Waves, the exhibition sees the work of Alfadni, which is largely focused on the exploitation of historically-forgotten human beings, alongside that of Egyptian artists Souad Abdel Rasoul and Hani Rashid, Moroccan artist Combo, and Tunisian artist Elias Messaoudi.

But its Alfadni’s series Ace of Spades that stands out the most. A student of Sudanese history, Alfadni’s work is hugely motivated by the visual portrayals of Sudanese people by British and Egyptian colonizers and orientalists.

Having spent his childhood in both Egypt and Sudan, Alfadni has long-been familiar with the tensions between the two cultures. Think of his work as a method of giving a much-needed voice to the marginalized Sudanese community, as well as challenging the power dynamics between individuals and authority.

“They don’t depict them in a very humane way,” he explained in an interview with Scene Arabia.

Using signs and symbols from that time, Alfadni reimagines the Sudanese soldiers, shifting the historic power dynamics to highlight those who were marginalized: “I could choose ones that had a certain pose, that looked at the camera from certain perspectives, and I’d use the image as an icon, while using motifs in the background that simultaneously raise and answer questions about the Sudanese colonies of the time,” he explained further.

Taking the last few weeks into consideration, the exhibition comes at a time when race relations have been largely discussed all over the globe. Not long after George Floyd’s murder and the protests in support of the Black Lives Matter movement that followed, the Arab world saw a spark in dialogue surrounding racism in the region, of which Sudanese people are one of its most frequent targets—making Alfadni’s work all the more important.