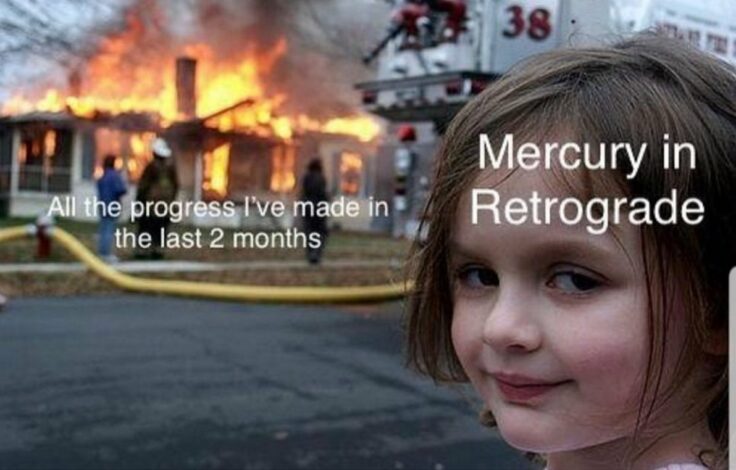 5 Young Arabs on How Mercury in Retrograde Affects Them

I didn’t know what Mercury in retrograde was until last year, but ever since I got the memo, I’ve been hearing and reading about it literally everywhere (and I’m not alone –Google searches of the term have dramatically increased over the last few years). And thanks to the myriad of retrograde memes sprawled across my Instagram feed this week – we’ve just entered our first mercury retrograde of the decade.

“Don’t sign new contracts”, “don’t get a new phone”, “don’t travel”, “don’t build new relationships”. These are just some of the things we are told not to do during mercury in retrograde. It is commonly accepted that the phenomenon—which occurs a few times a year—impacts communication, travel and technology.

Although some sceptics might find this ridiculous, in a nihilistic, capitalist society like ours, many people are simply trying to find meaning, recognition and refuge by looking to the stars and planets.

And Arabs and Muslims aren’t excluded from this trend. In fact, astrology has always been particularly popular among young and marginalised communities. Because when the world is against you, it seems like nothing feels better than finding comfort in the universe.

We asked five young Arabs and Muslims how mercury in retrograde affects them.

Khaled, 18, Egyptian
“I’ve always been into horoscopes and I’m super superstitious, even though everyone says they’re fake. I started realizing that I would get really affected by the major shifts of energy that come with the full moon each month, and with every retrograde. Usually alongside consistent daily meditation I also learned to receive the energy positively. After going through a depressive episode I’ve stopped mediating consistently and retrograde hasn’t been received as well. Because at the end of the day, the energy you put out will return to you.”

Buse, 25, Turkish
“I usually go through ups and downs and I work on myself a lot, so astrology, and the movements of planets and the moon in particular, has allowed me to put things into perspective; to look at my mood swings with more compassion. I always look in which sign mercury is retrograding. I do research and I introspect a lot. Right now, with mercury retrograde in Pisces, I analyse my emotions in relation to the past, unfinished relationships, etc. Sometimes I associate mercury in retrograde with things like missing my bus or getting something wrong. But I’m not for creating self-fulfilling prophecies and projecting negativity around mercury in retrograde means we are letting everything we see on the internet dictate our lives. I take it as an opportunity to listen to myself, evaluate my relationships, but I do avoid making important decisions.”

Myriam, 23, Algerian
“I’m a Gemini and mercury’s impact is stronger on us. During the retrograde, we struggle for clarity and we feel overwhelmed when things don’t happen the way they should be happening. At first, I used to think of mercury in retrograde in a very alarmist and sensational way. I thought surviving it would be impossible. But I’ve been reading more about it and I now think that Mercury in retrograde is also a great opportunity to accept that sometimes things don’t work out and this perspective has really helped me work on my positivity, take a step back and realise that it’s all only temporary.”

Malda, 32, Syrian
“Firstly I don’t know if it’s tied to retrograde as it’s something I only started paying attention to last year. So I think mainly what happens and how it affects me is how it turns me upside down. I feel a wave of deep, darkness take over me. And I end up retreating to isolation and avoiding high arousal things like people, activities, and decisions.”

Khaoula, 26, Algerian
“This astrological phenomenon is known to have an affect on communication, transport and technology. I’ve experienced issues with all of the above on past occasions— whether it was by missing a flight or having my iPhone randomly start glitching. I’ve had men, whose existence I literally forgot about, randomly reappear in my life, or slide in my DM’s to be more specific. When mercury is in retrograde it’s also advised to avoid signing any legal document, so at my last job, I literally refused to sign a contract until mercury went direct again. Of course, there are times when I can’t put my entire life on hold while I wait for the planets to harmoniously re-align, so I just make sure I re-read everything carefully, double check appointments, and think about what I’m going to say before I say it.”