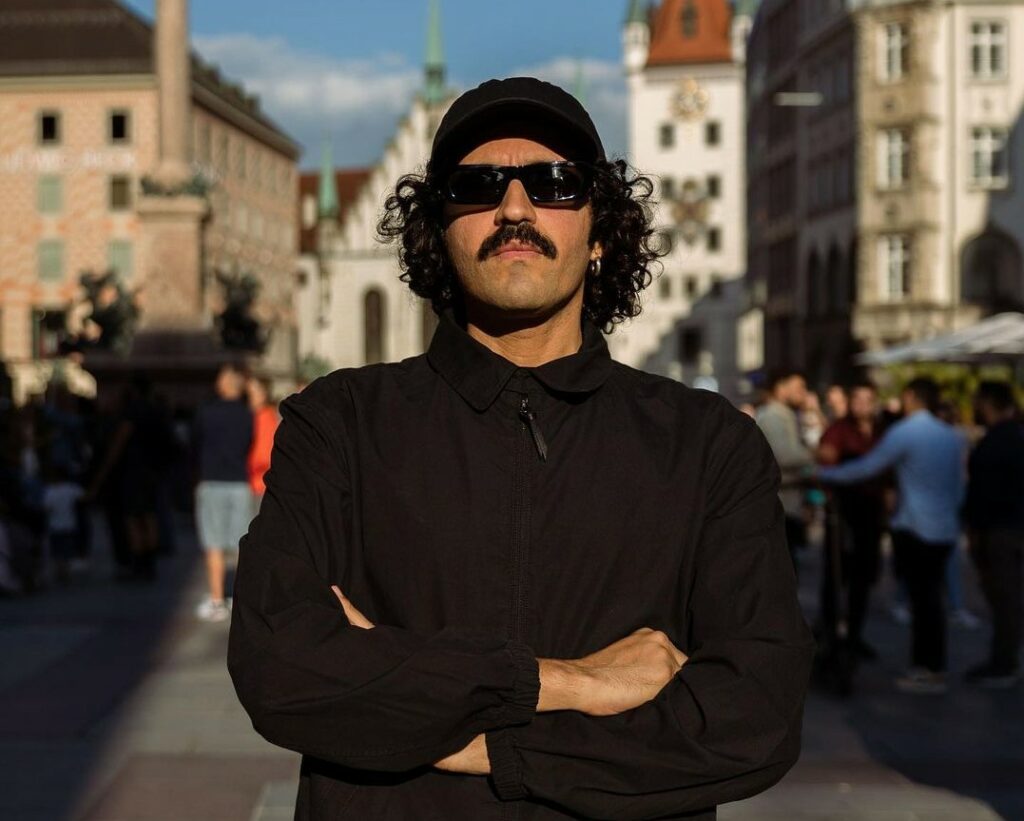 Basil Alhadi Opens Up About Mental Health, Staying Grounded, and Everything in Between

We caught up with the Jordanian model and DJ in Paris

When it comes to major cities like Paris, it can be difficult to stand out and make a name for yourself. But as it stands, Basil Alhadi isn’t having a hard time doing just that—despite being based in Dubai for the majority of the year.

It’s around midday when I make my way towards Place de la Bastille, a square in the 11th arrondissement of Paris where the infamous Bastille prison once stood before the “storming of the Bastille” that subsequently ignited the French Revolution, for my planned rendezvous with Alhadi, one of the Arab creatives chosen to star in Montblanc’s campaign for its latest line of bags. 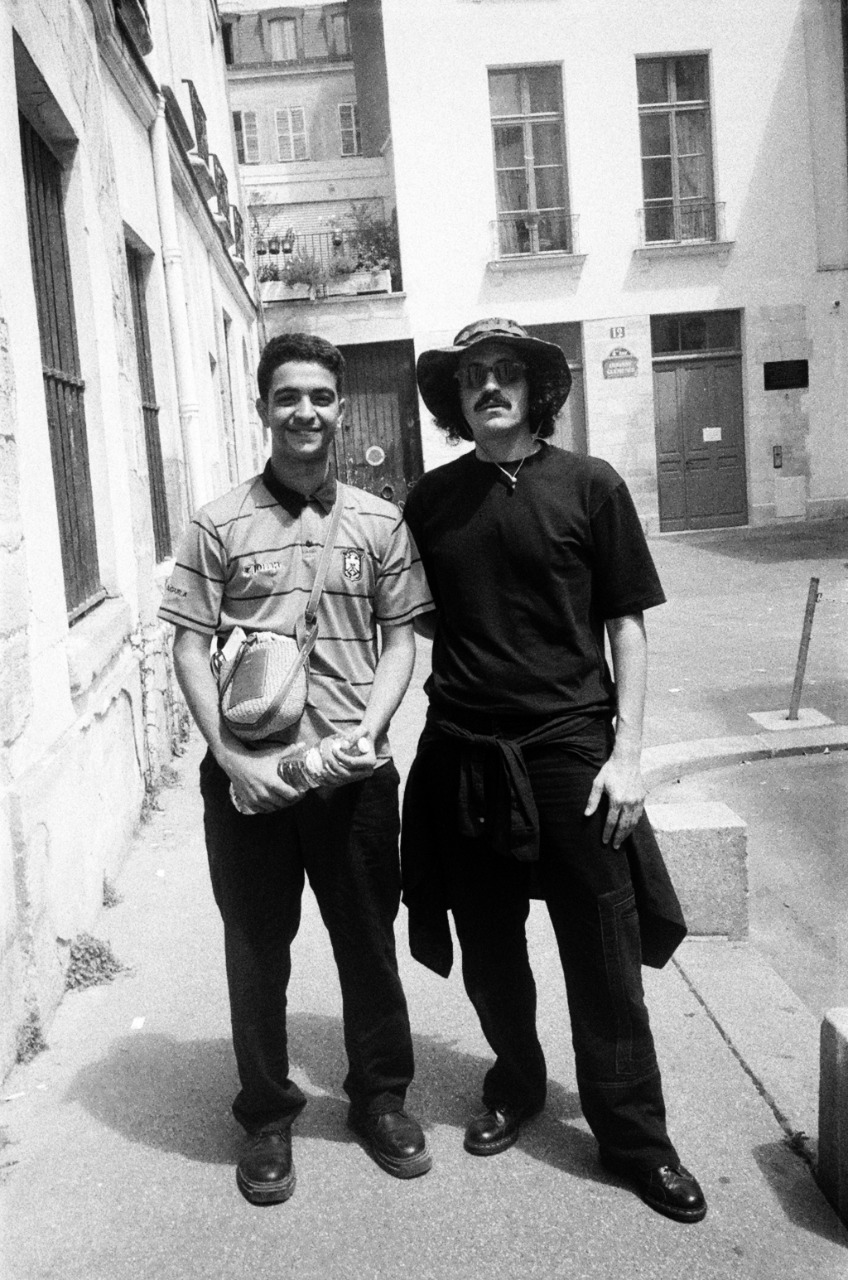 Titled “On the Run,” the new offering aims to showcase the functional and emotional benefits of leading a “life on the move” while doing what inspires you most.

Some were clearly embracing the motto to the fullest as, when I show up to the bustling station on a sunny Friday afternoon, it’s hard to miss the dopamine-diffusing young man, harnessing both spirits of travel and happiness, jumping up and down out of a buzzing pool of Parisians.

The Jordanian multi-hyphenate wears many hats. In addition to being a Montblanc brand ambassador and social media content creator, Alhadi is also a DJ, former lead singer of an Arabic reggae band, and a reality television star following a brief stint on MBC’s “Beauty Match” in 2020.

“Things are crazy (in Dubai) at the moment,” said the energetic creative, who just flew in from the tiny UAE city  to shoot the campaign, alongside six other Arab male creatives including Samir Decazza and Fahd El.

“It’s really become a hub now for creatives and we’re all feeling it,” said Alhadi. “That’s why the community there is feeling bigger and more rooted,” he added.

Although used to catching flights for shoots and campaigns, this time, we took Alhadi on a trip down memory lane to discuss his early beginnings, career, and future plans. 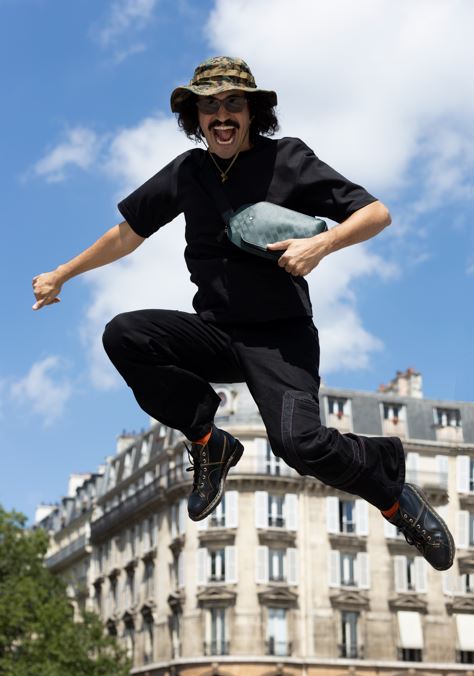 “I initially come from a musical background. I’ve always been obsessed with it and with the idea of creating (music). My Dad constantly used to tell me that I had to leave a mark and for people to remember me in a good way. And I took that to heart, starting from the days back in school and university. It’d be me and my friends jamming in one of our rooms, before our parents would kick us out, playing with oriental keyboards, naively projecting ourselves on tour and singing all day long,” recalled the Kuwait-bred DJ.

As someone that is substantially younger, I always looked up to creatives like Basil equating being Arab to being cool. Whether that was intentional is another question, but when asking him how he got to his current position, Alhadi knew exactly where his story started unfolding for the best. 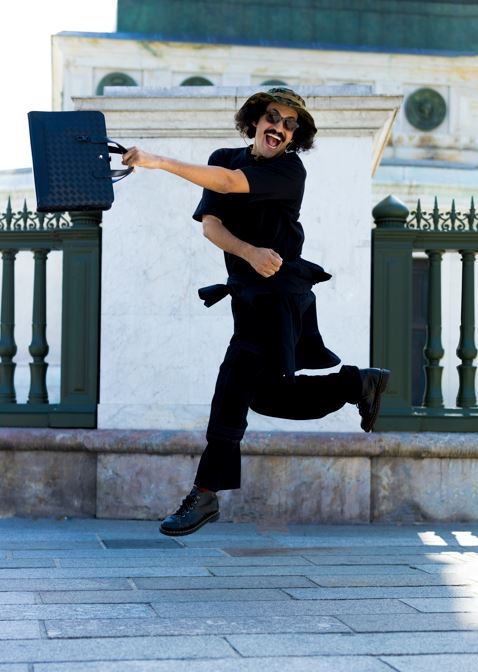 “I’ve been lucky enough to have lived in New York, Kuwait, Jordan, and Turkey, but when I moved to Dubai, I finally felt like I was in the right place. The city provided us with a platform. All of these adventures in the creative world started in a funny way looking back. It all started as a group of friends taking photos, doing music, hosting parties, pop-ups, and so on. But since most brands have headquarters in Dubai, they started noticing us and from there the rest is history,” he explained, adding that the real challenge was to stay grounded.

“When you get into the game of fashion, music, and entertainment, at a certain level, (you can get) lost and blinded by the industry’s lights. It’s a bit like ‘Lalaland,’” he shared. That’s why every so often, he decides to disconnect from that world by shutting off his phone, go back home to spend time with his family, or lock himself in the studio.

“I start doing things for myself again, like composing music. Nothing is meant to be released to the public, it’s literally just for me. You should see the size of my hard drive. I have gigas of unreleased stuff that I take pleasure making without thinking of the pressure that comes with satisfying an audience or client,” he said.

In our books, the man who is affectionately known as Karrouhat by his devoted 109,000 Instagram followers is the human equivalent of a Swiss knife as his range of skills is quite frankly almost infinite. With talent comes a certain level of recognition and fame and as we know, with great power comes great responsibility.

“At this point, I’m just trying to let things flow out of me. I don’t want to put myself in a box although it takes a lot of effort. I have so much to paint on my canvas, so many blank spots to put my mark on. That’s how I keep the fire burning. And it’s important to stay hungry and try new things out as I’m not doing this just for myself anymore for me but also for those that might look up to me, which is a responsibility that can be quite heavy to carry on your shoulders,” he shared. 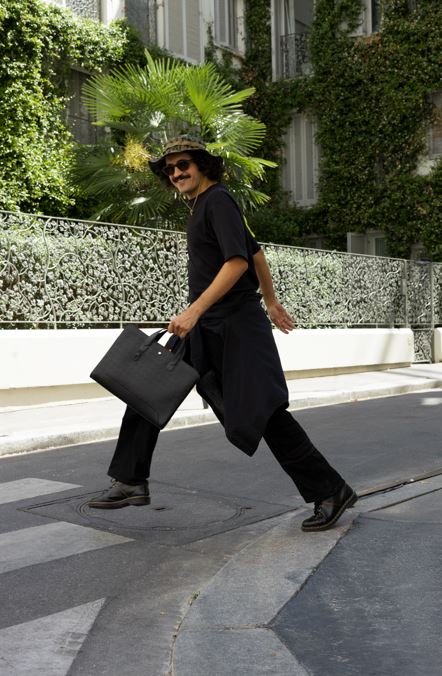 “It can be quite scary as it can take you to some dark places, which are important to go through sometimes. There are certain times when I felt low, almost depressed. I had to put out content, fresh content, but staying true to myself was then difficult given these responsibilities and surrounding circumstances,” he added.

As previously mentioned, Alhadi is undoubtedly of that cohort of creatives that owned up to his roots, without having to compromise on his values, and that was undeniably cool. However, it now also felt like I could also look up to him as a fellow Arab who struggles with his thoughts and feelings and what his go-to remedies are.

“Therapy is obviously the natural thing to go and do. I have to check on my mental health with a therapist every now and again. I practice what I try to preach, which is going offline and reconnecting with people, real people that are not in this business, that manage to remind me of myself. And honestly, when you reconnect with yourself, you automatically connect with the bigger energy,” Alhadi confessed, adding that talking to his mom is also a source of therapy for him.

“I like connecting with people that have similar traits and mindset as her. She has a basic way of dealing with life, which is something I’m striving towards,” he shared. “We tend to complicate things a lot when they don’t have to be. When we want to move from point A to B, we tend overthink it. My Mom would just walk towards point B without all this anxiety or stress. When I connect with that kind of energy, it brings me so much peace. I try to attract these kinds of people my way. I try to keep that sensor for those people awake at all times, which also extends to brands,” he went on to reveal. 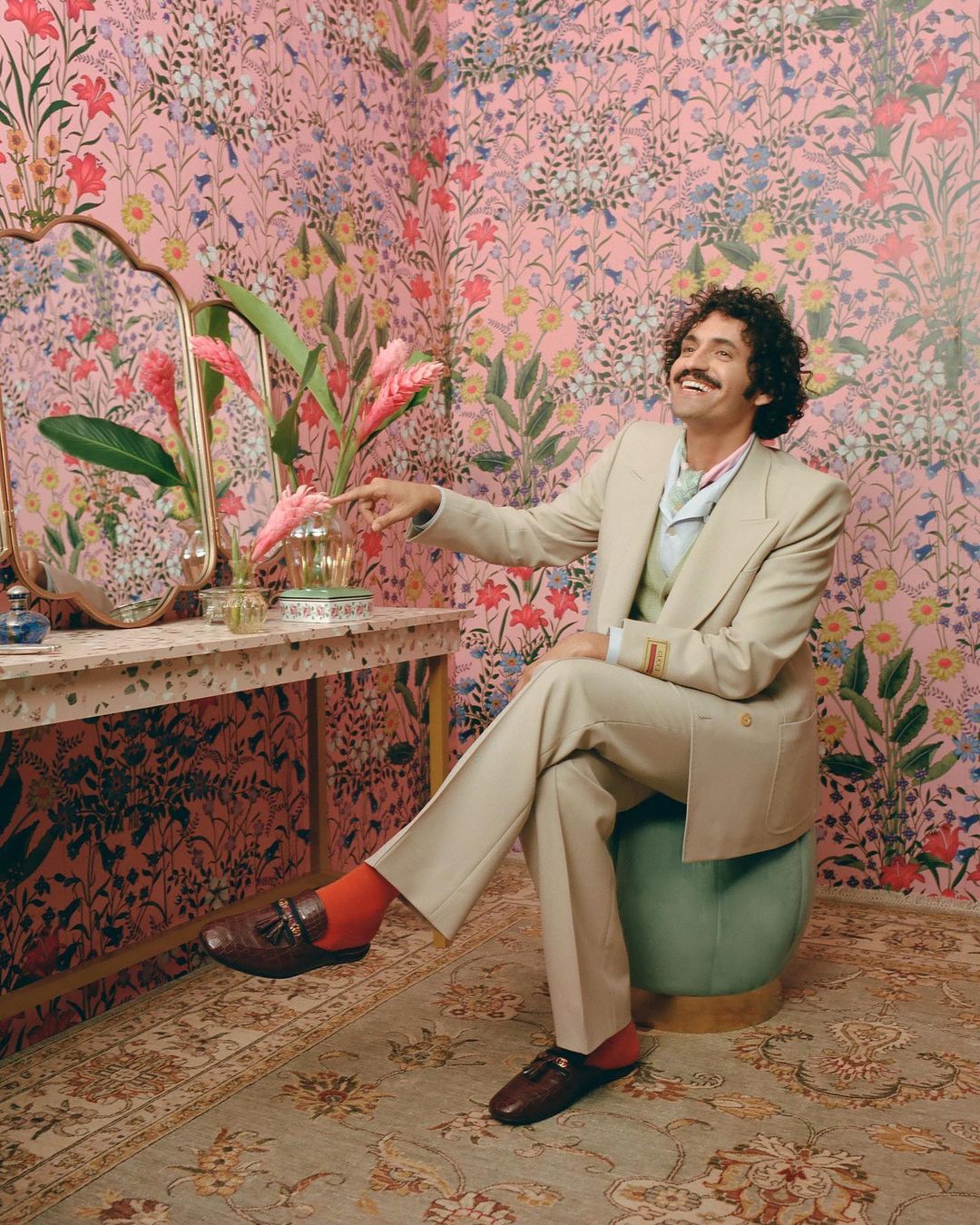 Alhadi has two approaches when it comes to which brands he partners up with. “The first one is more technical, and has more to do with numbers and contracts. And the second, is about intuition and my guts,” he explained. “I try and decipher how I feel about deals after the second or third meeting and follow through with how I feel. If it’s positive, I hand the technical stuff to someone else and just follow what I feel.

“With Montblanc it’s different. I genuinely call them family now. In the beginning, we obviously had loads of conversations going back and forth. But now, we found a common ground where we are both ultra-comfortable. It doesn’t feel like work when I’m with them. They include me in all their activities and in return, I genuinely care, like family, about how I take their brand forward,” Alhadi said.

Time is ticking and the model and singer had to go back to his overly-booked Fashion Week schedule. The conversation was deep and insightful, but far from being complete. Given the esteem he has for Montblanc, we wondered aloud if we would ever see him climb one of the highest summits in the Alps of the same name, to which he replied: “hopefully soon.” 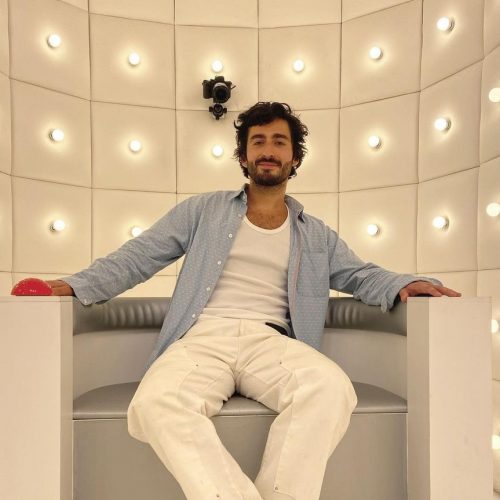 Rising French-Algerian Star Symon Answers All of Our Burning Questions