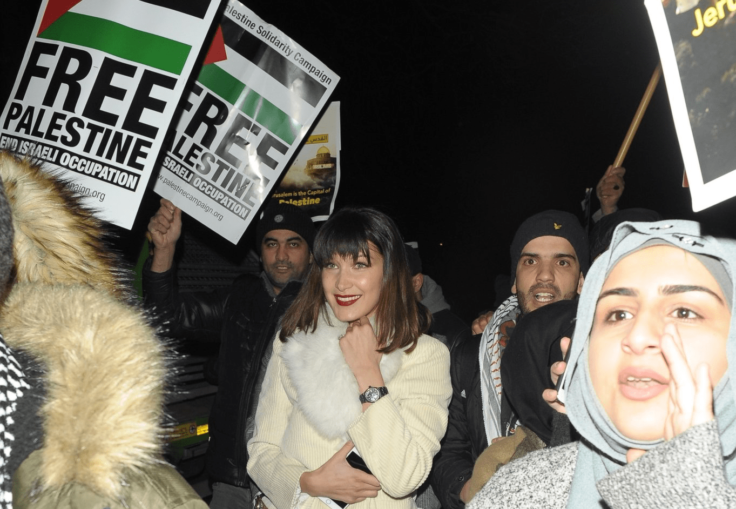 5 Times Bella Hadid Spoke Out in Support of Palestine

The model uses her platform for good

As Israeli Prime Minister Benyamin Netanyahu plans to illegally annex parts of the West Bank, there’s never been a better time to examine Palestinian history. And it seems like Bella Hadid got the memo. The Palestinian-American model is unabashedly committed to harnessing her platform for change.

The plans for annexation have proved to be a catalyst for a younger generation to speak out, Hadid included. Unapologetic, they’re scrutinising the colonial legacies behind the theft of Palestinian land, which dates back to the Balfour Declaration.

Don’t know what the Balfour Declaration is? It refers to when British Foreign Secretary James Balfour declared in November 1917 a “national home for Jewish people in Palestine”—a move that altered the lives and destiny of millions of Palestinians.

Put simply: prior to 1917, Jews constituted 10% of Palestine’s population, owning only 2% of the land. The declaration then paved the way for the UN partition in 1947, when Jews were allocated 55% of Palestinian land.

Later, in the wake of the 1948 War, Israel extended its control to 78% of Palestine. And finally, in subsequence to the 1967 war, Israel went on to occupy the West Bank and the Gaza Strip, too.

Ever since, Israel has continuously violated international law by expanding its settlements, making the progressive disappearance of Palestine a legacy and consequence of both Western and Israeli colonialism.

While the Israel-Palestine conflict has now passed the 100-year mark, US President Donald Trump announced last January, without scruples, what he called the “deal of the century”, which effectively gave Netanyahu permission to bypass international law and move forward with his plans of annexations.

Calling out Israel’s unlawful violence and voicing her sadness and outrage, Hadid has been increasingly vocal about the Palestinian cause on social media over the past few years, calling for the Palestinian right to justice and equality.

The model is not short of pro-Palestinian moments. But we rounded five major times she spoke out in support of her father’s native country.

Following Donald Trump’s recognition of Jerusalem as capital of Israel and his decision to move the embassy to Jerusalem, Bella shared a heartfelt post, which read, “The treatment of the Palestinian people is unfair, one-sided and should not be tolerated. I stand with Palestine”.

As her architect father Mohamed gave a speech at Harvard in celebration of his Palestinian roots and his journey as a Palestinian refugee in the US, Bella shared a post in which she expressed feeling proud about her father’s accomplishments, particularly the Dar Al-Hijrah Islamic Center he built in Virginia in 1991. “The fact that it still stands tall, as a safe place for Muslims& refugees to feel protected and comfortable, makes me the proudest daughter in the world. Baba, Thank you for constantly teaching &showing me the true beauty and truth of the Muslim/ Palestinian community; I can’t wait to continue to follow in your footsteps”, she wrote.

Last May, Bella shared an honest and personal message in celebration of Eid, paying tribute to refugees and displaced families in the Middle East. Inviting her fans to donate to charities, she wrote, “As Ramadan comes to a close, my thoughts are with families and children around the world without a safe place to call home. It makes my heart break thinking about the children and families that are separated and unable to unite during this time. I wish there was a way that I could take the pain away or more that I could do.”

Back in 2017, Bella and Gigi joined the New York protest against Trump’s travel ban. My dad was a refugee. He came from Palestine to America when he was a baby. Thankfully, he was able to come, but it was very hard and now it’s probably 100 times harder. It makes me sad that power is getting taken from a lot of people and they’re not able to make a new life for their children and their families. It’s crazy to me that one person can tell you whether or not you can have a better life”, she told Harper’s Bazaar explaining why it felt important to her to be there. 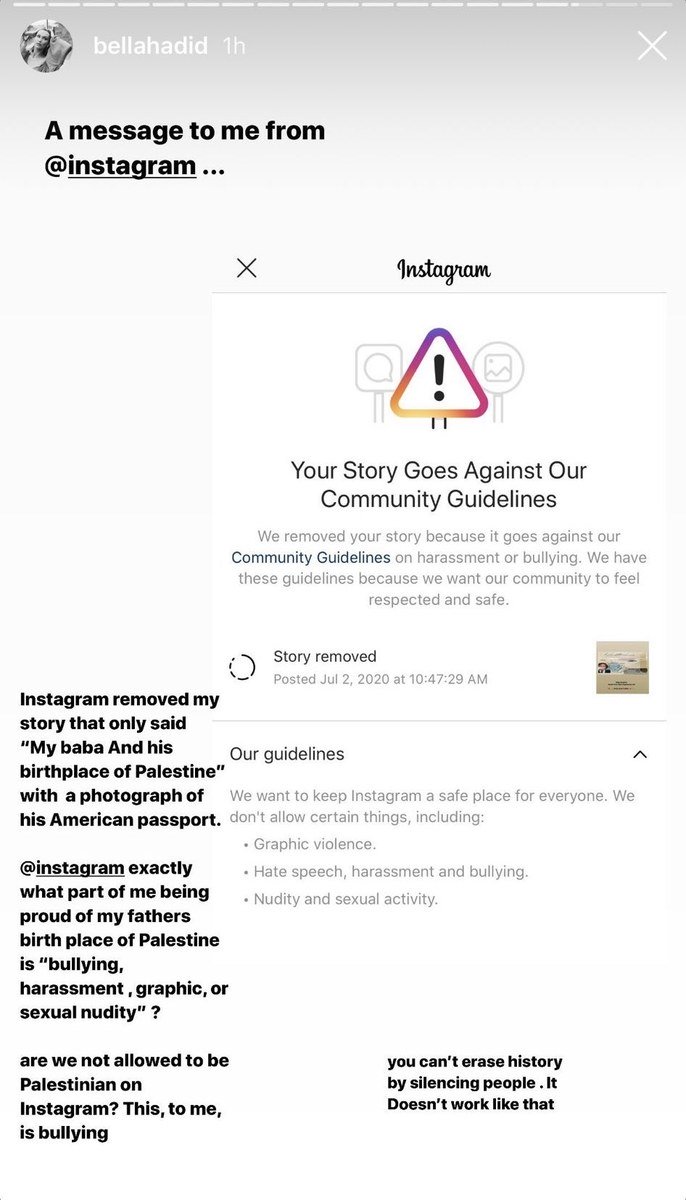 Last but not least, earlier this month, Bella shared a picture of her father’s expired American passport, which stated he was born in Palestine. On July 7, Bella revealed on her story that the picture was taken down because it allegedly breached Instagram’s guidelines. “@instagram exactly what part of me being proud of my father’s birthplace of Palestine is ‘bullying, harassment, graphic or sexual nudity? Are we not allowed to be Palestinian on Instagram? This, to me, is bullying. You can’t erase history by silencing people. It doesn’t work like that”, she wrote.