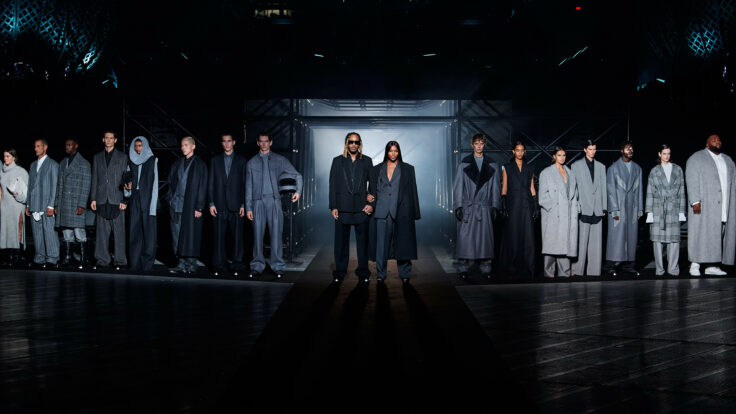 Calling Boss’ most recent runway presentation spectacular would do the Italian brand a disservice. At the heart of Milan’s La Madunina, guests and members of the press alike all consensually agreed on the grandeur of the event that was collectively witnessed on Thursday night. The late show, that kicked off at 9:00 p.m., saw heavyweights from all over the world of fashion, music, and culture, descend upon the Vigorelli Stadium for what will be remembered as one of the main highlights of Fashion Month.

Hosted in the Italian city’s only American football ground, references to Uncle Sam were tangibly felt all throughout the label’s latest ready-to-wear collection. If last year, Boss decided to tap into baseball culture, fall 2022 was a real cocktail of US symbolism. From the very sports-like seating in the stands to the unbounded decor (comprised of a 360° runway), and a striking motor bike show, Boss clearly wanted to leave its mark this Milan Fashion Week.

It was almost impossible to walk into the venue without bumping into your favorite celebrity. Usually, front-rows are left aside for the guests of the highest caliber, but last night, VIP guests could be seen occupying the first five rows at once, given the uncountable number of stars that were present yesterday.

Russian supermodel Irina Shayk was sat on one side, American it girl Lori Harvey on the other, reggaeton legend J. Balvin also made an appearance, and so did Korean actor Lee Min-Ho.  Some of the region’s most notable names, including Mohammed Habtoor, the Habdan twins, and Italian-Egyptian content creator Aya Mohamed, to mention a few, were also seen mingling ahead of the show.

Suddenly, the lights went out and the room is plunged into semi-darkness, and all guests make their way back to their seats: the show is about to begin. To everyone’s surprise, Naomi Campbell emerges on the runway, coated in a charcoal-colored suit. Did anyone expect her to open the show? No. Did everyone’s jaw drop when she did? Yes. From there, it was like scrolling through an Instagram feed given the amount of blue-ticked personalities turned models for Boss’ latest offering.

What’s more, the fall 2022 presentation was live-streamed across several  platforms online, including the brand’s own eponymous website. Pieces were immediately made available for purchase through the Live and the brand made history in the UK by being the first to introduce a direct shopping option for viewers via TikTok’s newest feature.

Followed by an after-party where drinks, food, and snacks were made available for guests to help take in the dizzying show that just took place, it was safe to say that Boss came, saw, and conquered Milan for a handful of hours.