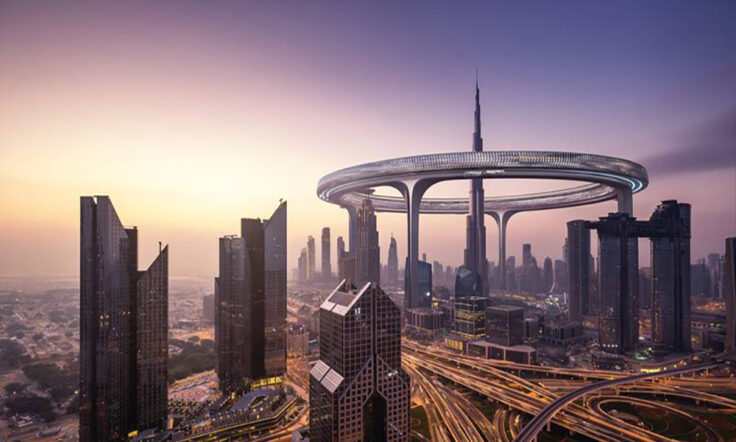 Move Over Burj Khalifa, the ‘Downtown Circle’ Could Be Dubai’s Most Ambitious Concept Yet

Dubai is constantly redefining its skyline and giving new meaning to construction and housing. Just this week, UAE-based architecture firm Znera Space have imagined, and proposed, a contemporary project that could change the Golden City’s skyline forever. Dubbed “Downtown Circle,” the aptly named structure consists of a 550m above-the-head ring, with a sprawling three-kilometer-long circumference meant to encircle the record-breaking Burj Khalifa as well as its surroundings.

The concept is an alternative response to the ongoing population growth around the world, and the way in which major metropolitan cities are dealing with such an increase in numbers, especially Dubai, where skyscrapers have turned into the de-facto solution for housing, office spaces, and more.

Conceived by Najmus Chowdry and Nils Remess, co-founders of Znera Space, during the pandemic, the structure will be split into two separate rings that house public and private spaces, as well as cultural and commercial spaces as it seeks to address the growing dangers of climate change.

The rings will be connected by a Skypark, a huge garden which will recreate different types of natural scenes and will feature a variety of plants, canyons, waterfalls, and digital caves inside.

“Different natural scenarios and climates are recreated inside the continuous Skypark, forecasting a lively journey to the visitors and residents,” Znera Space wrote on Instagram.

“Visitors can experience the canyons, sandy dunes, and plants from various floras. Swamps, waterfalls, and tropical vegetation or the digital caves, cascades, fruit trees, and flowers of various hues and species together enrich the green ecosystem,” the post said.

To travel around “Downtown Circle,” people will be able to use a fleet of suspended peripheral pods to move from one end to the other of the yet-to-be-confirmed structure. Each pod will be able to carry 20 passengers and can travel at a speed of 100 kilometers per hour while providing a 360-degree view of the entire city.

If this ambitious concept plan for Dubai’s architecture actually comes into fruition, it could be the most impressive structure to date (sorry Burj Khalifa), and not just for its visually-pleasing aesthetics, but also for its commitment to sustainability and tackling environmental issues.