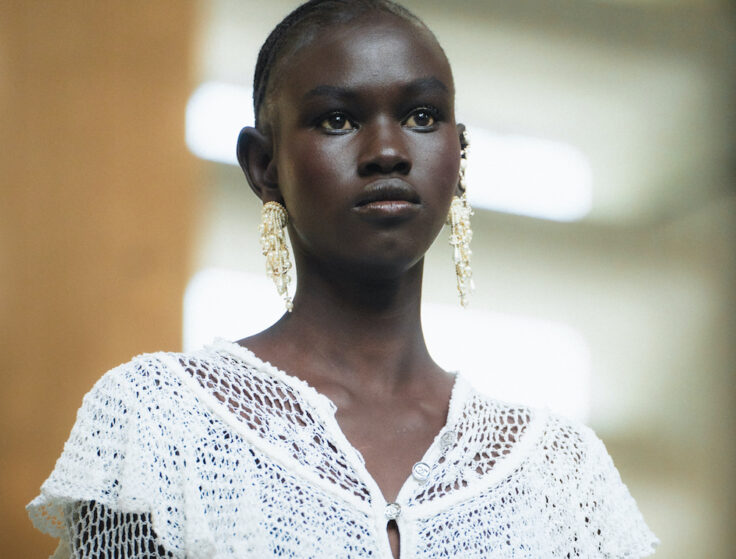 Chanel’s President Bruno Pavlovsky announced a series of upcoming interactions between Chanel’s le19M — an artisanal workshop located between the 19th arrondissement of Paris and the Porte d’Aubervilliers— and Dakar’s IFAN Museum of African Arts that will see cross-cultural exchange between the two. The first is an off-site gallery, la Galerie du 19M Dakar, which opened last week and will run until March 31, 2023 at The Théodore Monod African Art Museum, one of the oldest museums in West Africa. Conceived by a committee composed of Senegalese creative figures and leaders of its artistic scene, the expansive program’s mission is to beam local artisanal skills to the broadest possible audience, reassert the value of handicrafts, encourage their dissemination, and to spark dialogue.

“This first international program speaks to the renewed interest of professionals in fashion savoir-faire—supported for nearly forty years by the Chanel—as well as to a new popular fervor for handicrafts. We are grateful to the IFAN Musée Théodore Monod and to the Senegalese authorities for welcoming us here, in the heart of the Plateau district of Dakar, to celebrate the creative dialogue between embroidery, weaving, and contemporary creation,” he added.

The multi-disciplinary space, which is accessible to the public, is a celebration of the rich history and intricate craftsmanship of embroidery and weaving, whether on leather, wool, silk, raffia, cotton, or synthetic materials. The group exhibition, titled Sur le Fil, displays 38 works and installations across different media, alongside embroidery and weaving, such as photography and painting created by close to 30 contemporary artists from Senegal as well as Mali, South Africa, Bolivia, and France, that shine a light on the creative wealth of Senegal, while preserving African weaving traditions.

The exhibition also highlights specific Senegalese practices and skills across different regions in the sub-Saharan country, such as indigo dyeing. The color, worn by both men and women, is steeped with tradition in Senegal. It is a sign of wealth and is offered to celebrate births, and used to cover the deceased prior to burial. The sustainable practice sees a fabric maker taking an undyed cotton and stitching a pattern (fish bones, stairs, etc) into the fabric, pulling the thread tightly to cinch it, before dipping it into the indigo dye. The part of the fabric enclosed in the stitches is protected from the dye, and either remains white or takes on a lighter shade of blue. The longer the contact the fabric has with the dye, the deeper the shade of blue. After hanging the fabric to dry, the stitches are cut open by hand, one by one to reveal the motif.

Manjak pagne tissé, another type of traditional woven fabric is also spotlighted. The presence of Manjak weaving in West Africa dates far back to the height of the slave trade, when Manjak weavers were held captive in Cape Verde, bringing them into direct contact with the Portuguese, who organized the production of these highly decorated fabrics for trading purposes. It was during this time that the Manjak weavers adopted European weaving techniques. Sadly, the tradition is slowly fading as it is hard work that doesn’t pay well, which is why it’s so important to educate people about the traditional technique that holds great meaning for the Manjak community.

Regional crafts from other regions including Saint-Louis, Cayor, and Sine-Saloum are also pushed to the forefront in the exhibition.

Some of the pieces in the space were created specifically for the event, while others have been loaned from artists, public institutions, or private collections. Two tapestries commissioned from the Manufactures Sénégalaises des Arts Décoratifs (MSAD) in Thiès, the project by Julian Farade and the embroiderers of Ngaye Mekhe, or the collaboration between Maison Montex and the Kër Thiossane cultural center, further connecting Aubervilliers and Dakar.

Artists Alioune Badiane, Viyé Diba, Kalidou Kassé, Souleymane Keita, and Abdoulaye Ndoye — also known as “the moderns” — whose long careers have helped shape the trajectory of art in Senegal, particularly in the use of textiles in their practices, will have their works presented successively in the exhibition for two weeks each.

What’s more, throughout the course of the next few months, the exhibition will be punctuated by a number of different events, including the participative installation by Pauline Guerrier, the textile performance by Johanna Bramble and Fatim Soumaré, and the residencies of two French artists, Emma Bruschi and Pauline Guerrier, which will give rise to co-productions with Senegalese craftsmen.