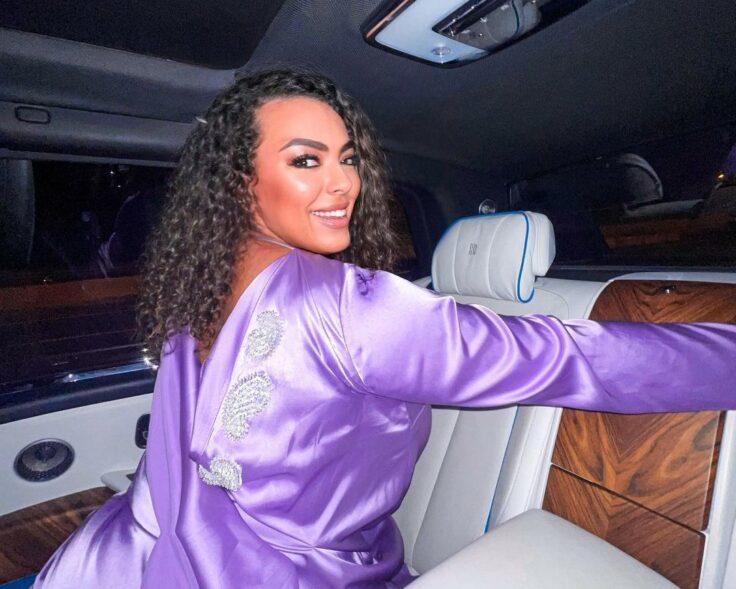 Opening the doors of a whole new industry

Although the world of fashion wants to be seen as inclusive and open to all, it’s still ways away from becoming status quo. For as far as history has recorded, beauty has always come with its own lot of standards — a small restrictive batch of ideals that have evolved and changed through time but nevertheless always upheld as the ultimate measure of attractiveness.

What can be considered attractive, or even the pinnacle of beauty can be deemed as the opposite from one era to the other. Undeniably, our generation has been the anxiety-inducing victim of thin cannons of fashion, with the expectation that models should go against the boundaries of their own bodies rather than embrace their natural reflection.

With that being said though, progress can be prompted when the art of reflection is mastered. That’s where Ameni Esseibi comes in. The Dubai-based model, who is of Tunisian origin, has been through thick and thin to learn how to embrace herself. What was initially thought out to be impossible for her to reach has now turned into a full-time paid gig she exercises on the daily.

“I never wanted to be a model when I was a kid. It’s not that I didn’t want to, it’s just that I never thought I would ever be able to,” Esseibi says. “I was sick of getting bullied but I had the switch at the age of 16 when I felt like I was done with it. From there, things completely changed. I started doing internships in the fashion industry because fashion is a way of expressing yourself. Fashion is art. And since I didn’t have a way to express myself nor the pain I felt when I was younger, I thought that I could express it through fashion.” the 23-year-old continued.

Since then, many titles come to be associated with the inspiring model’s name. Crowned as the Arab World’s first plus-size model, her steps in the very capricious world of fashion resonated with thousands in the region often empowering and supporting followers through their journey towards acceptance, confidence and self-love.

“My DMs can be quite depressing, honestly, sometimes because my DMS are not like “I love your Instagram”. It’s more of like, I wanted to commit suicide yesterday, but then I watched your interview on this page and it helped,” she comments on her journey and the responsibility that comes with becoming a body-positivity figure in a region where it’s not embraced.

“For me, summer season, I call it insecurity season because I just always get palmed with messages like “I can’t go to the beach”, “I’m not able to wear a swimsuit”, “I have stretch marks”, “I can’t be seen in a bikini”. But since, I’ve also had women text me and be like, since I’ve seen you swim in bikinis it’s made me feel better about myself, so now I’m able to do it which feels super good to read,“ she adds.

The phenomenon of obsessing over your physical appearance is anything but new, and it isn’t exclusive to the Arab world either. But as one might expect, the Middle East is no exception either. Evidence of that can be found in how common cosmetic procedures are in the Arab World; especially Liposuctions. In 2018 Tajmeeli, an educational platform on beauty surgery, had 5.6 million Arabic speakers interested in cosmetic practices visit their page with many of those expressing interest in undergoing one. Their study found that weight loss through liposuction was the third most requested procedure after hair transplants and rhinoplasty.

“It’s not normal because we’re Arabs, we’re born with curves. Even though you would find a thin slim woman, she would have some curves somewhere. We don’t have that super skinny silhouette,” Ameni explains. “[But] why are we known for amazing fashion, creators and actresses, but yet we don’t have any plus-size models,” she adds.

“When I was younger, I wish I had someone like me in the industry someone that I could’ve looked up to. That space is vacant in our region so why don’t I myself give a voice to all in the region and to look up to a girl that’s also Arab. That’s also Muslim, that also has the same culture and traditions, that speaks the same language and that understands their point of view. We can’t all look up to Western models, they just don’t get us,” Esseibi states.

Existing a plus-size model is already difficult. The industry is still far from seeing them strut down runways for global brands each fashion season. With that in mind, it’s now worth noting that our region is still harnessed by some level of conservatism, still doesn’t see eye to eye with modelling as a whole, with the perception that the industry isn’t compatible with Arab society’s core values. Representation, arguably at the forefront of most present-day conversations, is a realm where common ground is hardly found.

“There’s mislead in representation in the Middle East though. What is represention when someone tells me “you do represent us, you’re too liberal!” Who is us? Do I have to wear a hijab for you to be happy? Do I have to wear be wearing a turtleneck for you to feel represented? But then I’d be lying because there’s that whole new generation of Arabs that is super modern and that is super liberal too. They’re super open to culture, are into fashion, to art and maybe because they have strict parents, they kind of are restricted on how much they want to be out there. But I’m not.”

“But it’s also kind of crazy how people just expect us to constantly be ambassadors of our own culture. You know, it’s as if we cannot just exist for ourselves. I’m not speaking in anyone else’s name.”

And that can also affect your finances. Brands are more and more careful about who they want to associate with and what image precedes their talents which means having to cut some out by fear of negative reprisals online.

“I have lost campaigns in the past with big brands because they tell me that they cannot be associated with me. And I’m like, what do you mean? Why can you not be associated with me why? And it’s just like, “you’re too sexy. And that’s an issue that I’ve been having. You’re too sexy. What’s too sexy? Do you see me posting naked pics? Do you see lingerie? What’s too sexy?”

“They don’t see themselves working with me as if I don’t represent the Middle East or too immoral for them. I’m like, you guys work with influencers and models that take exactly the same content as me, minus the curves. Yet you don’t want to work with someone who has values and manners, just because they’re a little outside of what you see on social media.”

Although the plus-size industry seeks to open the closed doors of fashion to all, some issues still persist and remain – notably on how body type inclinations still exist as well as the semantics behind the term “plus-size”.

“If you’re going to go in very deep details of in the plus size world, people think, “oh, but she’s plus size. She can eat as much as she wants”, but if you don’t have that big butt and that small waist then you won’t fit in. Brands just want to sell, and for them to do so, they want to make it look pretty. And if it doesn’t look pretty, it doesn’t sell. But for them having a plus size girl that has a thin waist and that our body like contour for them, it’s sexy and that sells”.

The creative industry, including fashion and modelling,  is expanding by the day, with more and more enthusiasts now trying their luck at becoming the next figureheads of some of our favourite brands. Ameni, who has been at the forefront of the industry for some time now, is one person who’s done exactly that. For it to be democratised though, an educational process from both sides is still very much needed in order to normalise different body types, shapes and silhouettes. In the inspiring model’s own words, “if you learn to love yourself, the world will eventually start loving you”.