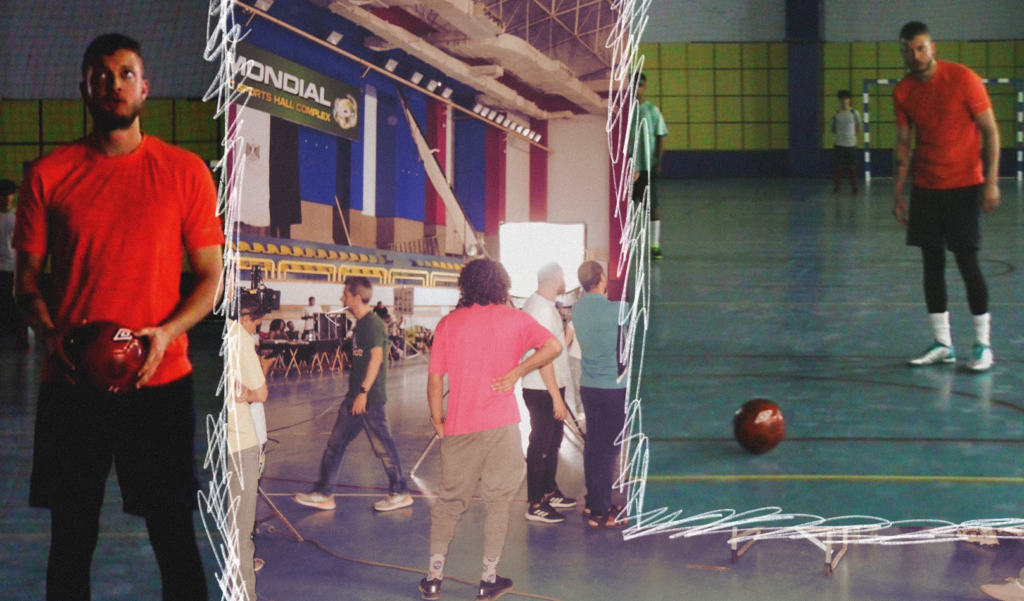 We sat down with the man himself

It’s been a long day on set in Cairo’s emblematic Studio Misr — an iconic location that’s seen many, not to say most, of Egypt’s classic movies be shot behind its walls. Today more than ever though, the old generation is leaving room for the new one to step in and add their names to the long list of artists that have been under Egypt’s first film studio’s spotlight.

Thanks to our friends from Spotify Arabia, we tagged along with the production crew for the relaunch of its Egyptian rap playlist Melouk El Scene, which stars Marwan Moussa, among others, as the face of its new campaign celebrating Egypt’s domineeringly popular hip-hop scene.

Conceived in 2019 as a sonic gate to discover, dig in deeper or simply replay some fan favorites of the moment, the country’s leading rap playlist — which saw an increase of 620% in streams since its launch — is marking its return with a new aesthetic and voice to diffuse to its users. Through this revamp, the Swedish-based streaming platform aims to pay tribute to the once underground, now mainstream, genre while bringing new visuals to navigate, in osmose with the essence of the culture, through the app.

Wissam Khodur, Artist and Label Partnerships at Spotify MENA, said in a statement: “Rap is more than a genre; it is a culture, a movement. Seeing how loyal and dedicated our fans are to rap on our platform drives us to keep creating more opportunities for them to connect with their favorite artists. Introducing new features such as Spotify Clips, a  rebrand for Melouk El Scene, along with a whole campaign dedicated to the Egyptian rap community shows how committed we are to growing young talents from Egypt, while leveraging our innovative capabilities to give rap fans the best listening experience on Spotify.”

Melouk El Scene’s new format will include a series of satirical videos featuring Moussa and Afroto in partnership with Egypt’s viral YouTube series Nesr El Scene: a mini-mockumentary centered around hip-hop. In the new rendition of the internet show, Timo, a member of Nesr El Scene‘s entourage who claims to be a hip-hop interpreter and well-connected to today’s top rappers, appears making his best efforts to break into the rap scene. From one episode to the other, it becomes increasingly evident that he’ll need a playlist like Melouk El Scene to keep up to date with the genre’s releases and most popular creatives.

Ahead of the campaign’s launch, we sat down with Marwan Moussa on his first day on set to discuss everything from the industry, his relationship with Spotify, and more in the artist’s first-ever English interview with Mille.

How does Spotify resonate with you ?

I listen to my music on Spotify; I feel most comfortable on it. I use Spotify to create really big playlists to help me stay on my artist diet. I have a big playlist for when I want to make music so that I’m always ready and have the right stuff playing in my ear. I’m always playing music for fun and Spotify is still the easiest and fastest way to find a song without a hiccup.

What’s your relationship with Spotify like as an artist ?

I think of it as the same way an athlete would watch what he eats: Spotify helps me watch what I listen to. It’s an easy place for me to make playlist to draw inspiration and make the music I end up making.

Are there any guilty pleasure songs on your playlists?

Honestly, I’m past my guilty pleasure phase in life. If you came to me two years ago, I would’ve shied away from them and only named some of the top dogs of the moment. What people refer to as commercial or whatever is kind of ignorant but something I’m really keen on is Mahraganat, which is seen by some as trashy in some way. Another one could be Kesha from back in the days or Avril Lavigne — obviously Sk8er Boi — which quickly got me into skating before figuring out that it wasn’t for me.

How does it feel to be part of this campaign and a king of the hip-hop scene?

It’s crazy. I’m from the era where we had to get CDs and cassettes to listen to music. Moving from CDs to iPods and then to the big era of downloading online to Spotify and seeing myself as one of the artist on it is, until now, still a trip. I try to not think about it too much though, to not get too competitive and forget about the passion part of it. The part where you had fun as kid listening to music that you loved — you don’t want to get sucked into the toxic side of it.

In what way does Spotify support you on your journey in the music industry ?

My entry to Spotify marked the moment I wanted to take music really seriously. I’m a bit of a purist when it comes to marketing and artist growth and for me, I always thought that you had to do everything yourself. But through the platform, and conversations with some people that run it, I discovered so many ways in which Spotify serves you as an artist by bringing you closer to people that like, or might like, your music in a really advanced way.

And it really also helps you discover other talented artists in the region — including the Moroccan ones, which I’ve become a big fan of over time.

No interview with a rapper could be complete if we didn’t ask the question: how much is it for a feature? (asking for a friend)

I don’t like doing features for money. If there’s someone wanting a feature and they want to pay then so be it, but mostly I’d collab’ with people I genuinely want to collab’ (with). And all it takes is for me to consider someone as super talented. I’m one of those people that actually cares about the artist more than the technicalities. If I make a song with an artist it’s probably more about how they position themselves and what they stand for rather than who has got the best flows on the track. I don’t like to think of features as a rapper. I prefer to think of them in the same way producers do, which is looking to get the best out of the other person rather than killing them on the song.