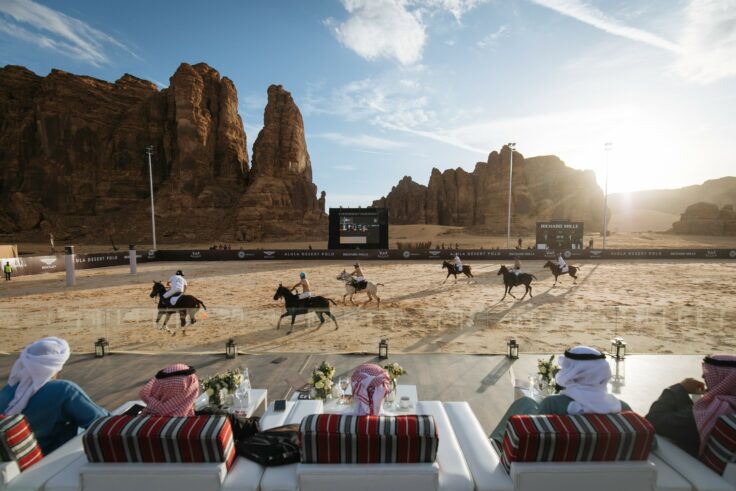 The desert is home to many things, but with exception of camel racing rarely do we find that it’s home to a sport. But Desert Polo is returning to the Kingdom of Saudi Arabia for the second time around. The Richard Mille Polo tournament is set to take place between February 11 to 12.

Amr F. Zedan, Chairman of the Saudi Polo Federation promises that this year will be “game-changing” for the sport in the Kingdom.

“Last year, I described the world’s first tournament played in the desert as an ‘appetiser’. This year, it will be the full ‘main course’ and I’m convinced it can be a game-changer for the sport in the Kingdom.” said Amr Zedan in a recent press release.

Taking place in AlUla, a part of the Kingdom which is more commonly associated with Hegra, Saudi Arabia’s first UNESCO World Heritage site, rather than sports. However, with the success of the previous event in 2020, it’s rapidly becoming the home of the sport within the region.

The Richard Mille AlUla Polo tournament will see four teams compete in a specifically built desert arena to host the event. Each team is captained by a player from the world renown La Dolfinia Polo club, the origins of the club are Argentine, but the club has grown from strength to strength in Saudi Arabia since its inception in the year 2000.

Additionally, the event will also showcase the talents of Adolfo Cambiaso, in the form of a masterclass. Cambiaso is a member of the prestigious La Dolfina Polo club, and is widely acknowledged as one of the best players in the history of the game.

Alongside Richard Mille, the title sponsor, Bentley has joined the team as this year’s official car and Air Saudia as the event’s official airline.

The event also falls on the same weekend as the opening of AlUla Arts, with flagship Desert X AlUla exhibition, and the recently announced Alicia Keys One Night Only at Maraya. It’s shaping up to be an unmissable event for the Kingdom.