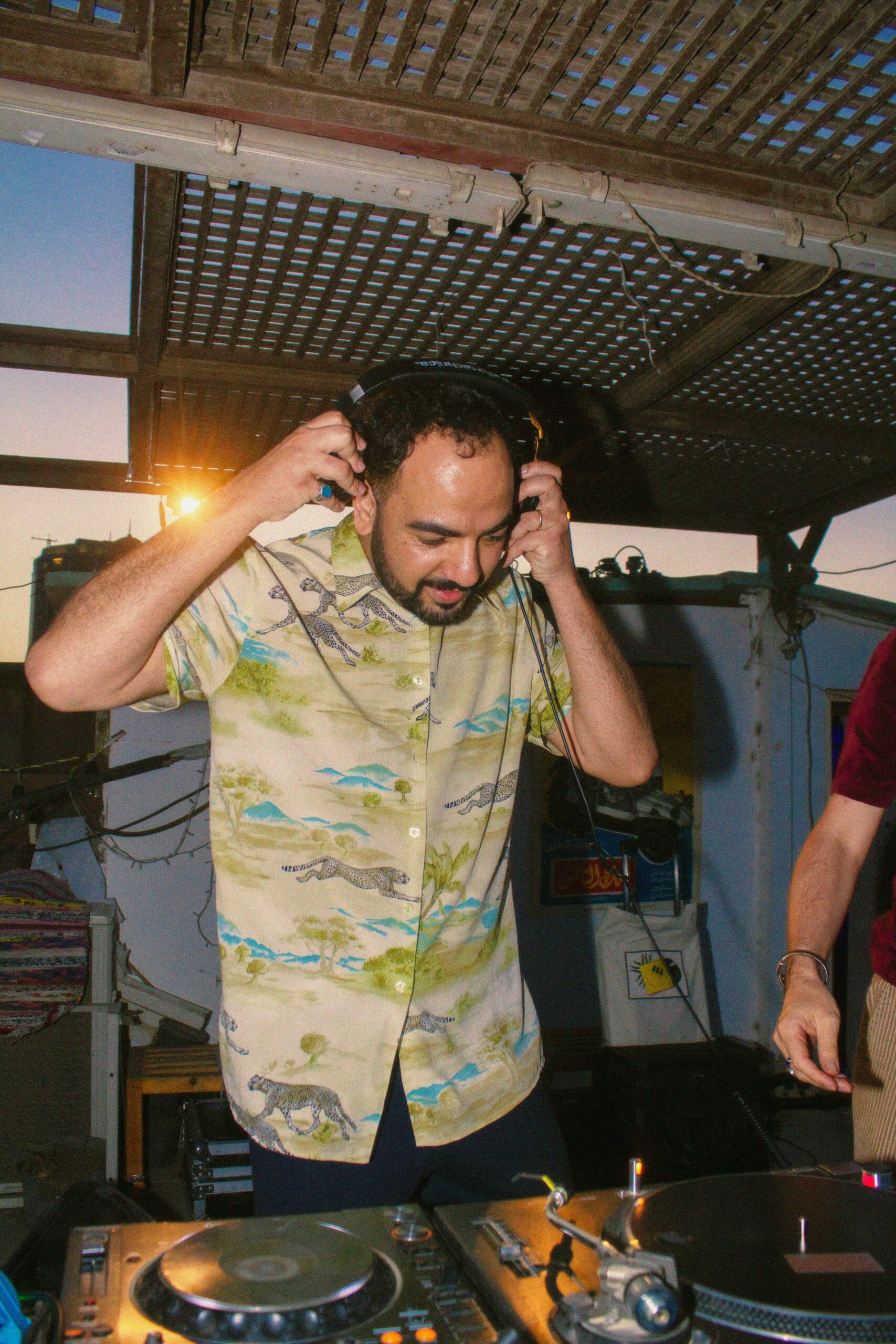 Disco’s Not Dead: Meet the Man Putting the Region’s Funky Tracks on the Spotlight

Blowing dust off your parent’s tapes

It’s another hot and festive afternoon in the Egyptian capital of Cairo. It’s the first weekend after Ramadan, and people are back to partying again.

Rumours have been going around for some days now. Apparently, Disco Arabequo had been spotted playing some sets a few days ago in a last-minute organised event and that he’ll be repeating the experience on a well-known rooftop downtown. It’s been a long month since we all lashed out on a dance floor, and this might be our first incentive to get loose after so long.

We’re now at Neon Rooftop. It’s an underground hub for up and coming, and even confirmed, artists to perform their sounds to a fine pool of avid listeners. Home to some of the city’s most dazzling views, the independent venue always leaves its guest DJs as a surprise. And after a slew of pre-Ramdan raves and a techno-spirited Eid, the duo behind the niche cultural hotspot, Ezz Okosha and Ali Ashraf, played the proud hosts to Disco Arabesquo’s latest pharaonic gig.

The first thing to be noticed upon walking in is the presence of a camera team and a group of journalists hailing all the way from Canada. They’re probing the disco/funk movement in the Arab World for an upcoming documentary. Against one of the rooftop’s rails, stands a smartly dressed man that introduces himself as Disco Arabesquo. That’s the moment the conversation kicks off and we start digging into his initial lust for retro records and mixing.

“My parents used to have a box of cassettes with a lot of tapes. I’d say that a lot of my knowledge comes from there. If I were to pick a starting point, I remember seeing this video on YouTube that went viral. It’s from a band called the Bendaly family from Lebanon and the song is titled ‘Do You Love Me’,” he tells MILLE while humming the song to us.

“My mind was blown.  In my eyes, they’re like the Avengers of the Arabic singing world. And they’re quite funky at the same time. They represent two worlds that in my mind are normally very separated but that came together in that song,” he continued.

The Bendaly family’s influence is undeniable in the region’s sonic history. Although they are long past their prime, they have still managed to transfuse their artistic vision and sound way beyond their timeframe and Disco Arabesquo proves to be another victim of their success.

“I’m obviously inspired by them. But I decided to make my first steps after I had a dream. That dream was set in the eighties in Cairo dancing in a disco. When I woke up and I just asked myself if these kinds of events even exist. From there, I took it to myself to make that party go from a dream to reality,” the Amsterdam-based Egyptian DJ confessed. “After a year and half of struggle and reaching out, one venue emailed me back and agreed to host my debut.

His passion for the genre can be described as a love affair that’s been going on for almost a decade. Having turned niching cassettes into a real lifestyle and a full-time job, the producer doesn’t necessarily want retro-Arab-funk to turn mainstream although he is adamant that the genre could potentially go global.

“I don’t want it to become mainstream. Because when things do they use the value. They’re often temporary and I want people to see it as something worthwhile. I want people to know that it’s there and if they want to tap into it, they can do it. That is the way to go about it for me,”

With that being said, Moataz Rageb, AKA Disco Arabesquo, still finds strength in the growing popularity of the genre — especially from a personal and generational perspective. In his own words, he sheds light how significantly important it is to digitalise an age-old culture to make it accessible, to all, permanently.

“If you don’t tell your story, it just gets forgotten. And I want the right stories to be told and remembered. Somebody has to make the effort to make that transition from cassettes to digital. Just as the same with vinyl and sometimes CDs,” he says.

“What’s even more important to me is not that just the music is growing, it’s that it’s changing people’s perspectives about the Arab world in the West. Because there are a lot of misconceptions about Arabic speaking countries and instead of negotiating with people or try getting into a discussion about what we are about, I play tracks instead. I am, in essence, an activist who now got into music,”

“When you play a song, it just breaks that idea that people have about the region. There’s so much creativity here. So based on that, that’s also what makes it very fulfilling. I can see a change in perspective,” he went on to explain.

Although there’s still loads to discover and unearth from the region’s sonic past, it’s undeniable that we’ll ultimately reach a point where today’s music, including rap and hip-hop, will eventually be considered as old-school and from the past. Maybe in 30 years’ time, another Disco Arabesquo might start spinning Abyusif tracks to newer and younger audiences. On that note, our guest for the day remains confident and reminds us to trust the cycles in which genres live, die and, if lucky, are brought back to the surface.

“It would be like how we now look at the music from the sixties that has a different sound than from the one from the seventies and eighties. It’ll be the same for the 2020s and it will sound retro enough to future generations. Not a lot of people know this, but a lot of Arabic rap was brought out in cassette and live with us today. There’s no reason why today’s sound would be any different,”

With mixes that beam just as bright as disco balls in the seventies, Arabesquo is on a commendable mission we can only salute. Giving us a small taste of what older generations used to tap toe to, it goes to show the importance of upholding heritage no matter the medium or format.