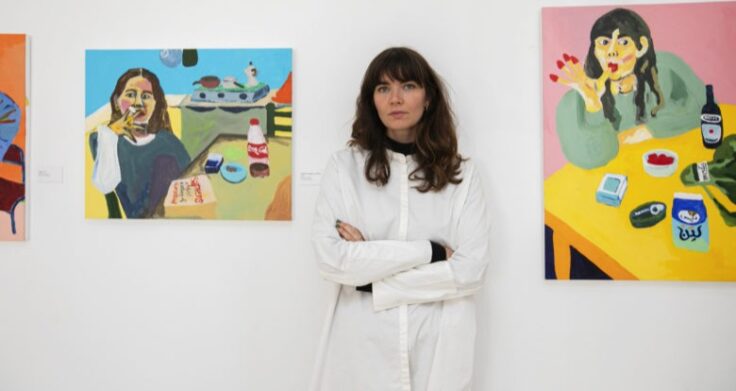 “I’m so nervous!” says Dora Dalila Cheffi, a Tunisian-Finnish artist fresh off her first solo exhibition. It’s the first time the 29-year-old artist has spoken about her work in Arabic, and she wasn’t sure if her vocabulary would encompass the nuances her paintings carried.

But with the exception of the occasional stutter, she eloquently speaks about herself and her work over a breakfast spread in the La Marsa home-turned-gallery where her independent exhibition was held.

Having spent most of her life in Finland, Cheffi relocated to Tunisia in 2018 for a multitude of reasons, but primarily because her relationship with her father’s native country had been limited, consisting of a yearly summer-time visit to his hometown, Sfax.

For Cheffi, this was a source of conflict. “Eleven months of the year I was one thing, and I’d come here and feel like I’d have to completely change who I was to fit in,” She reflects on her experience, but not before stipulating the partiality of her words.

To this day, she has never spoken to her family about her feelings. The fact that she’s still reluctantly confident about her Arabic language skills probably has something to do with that.

The debate that would have been had with her family was ultimately expressed through painting.  She told the story of the first phase of her identity-consolidation process through her first series, entitled Tunisian Sceneries. 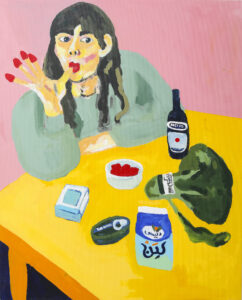 Cheffi spent her first few months living in Tunisia painting her everyday experiences.  She painted the things that were remarkable only to her as a new resident of Tunisia: breakfast spreads similar to the one she relished in the morning of our interview, the brutalist Hotel du Lac building in Tunis, and a watermelon sat on a cooler she had a taken to the beach. If these paintings were capable of speech, they’d natter Cheffi’s internal dialogue as she first laid eyes on her Tunisian subjects. 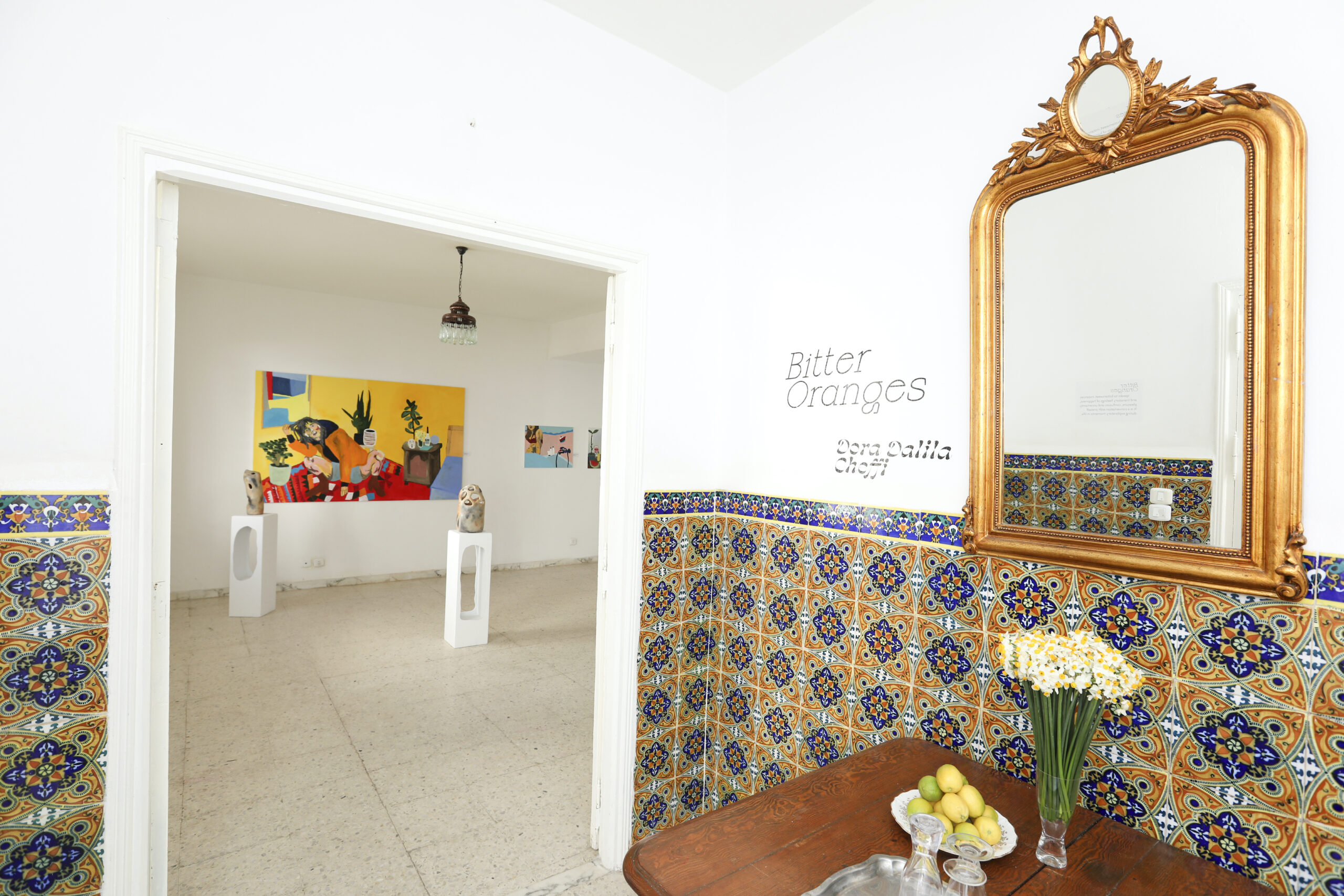 “It’s like you’re walking down a street you’ve just moved to, everything is exciting,” she explains. “But then you walk down that same street for a year and half, you no longer see the special things about it.” The analogy proves accurate upon a look at her most recent series. She has shifted gears. Bitter Oranges is the result of an identity crisis that’s been resolved. 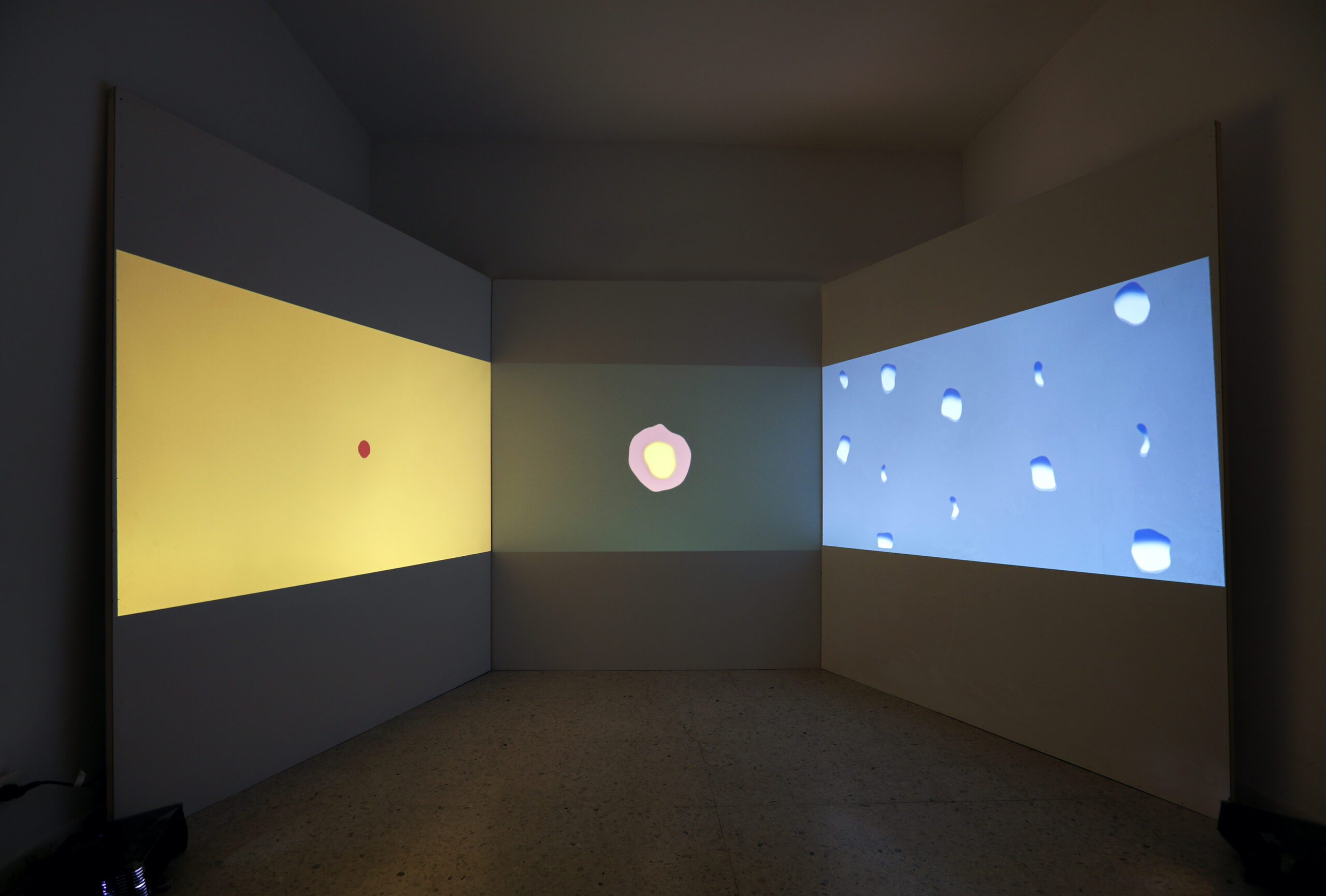 A piece titled Finlandia is proof of that. Working with Tunisian composer Souheil Guesmi and animator Wajih Aouinti, Cheffi turned Finland’s quasi-official national hymn into a Tunisian anthem. The Finnish lyrics were translated into Arabic, sung in a ‘Mawwal’ style, with projections of white, blue and red spheres floating to the beat of the hymn, eventually culminating into a single pink sphere. It’s the kind of piece that evokes a surge of perplexing emotions, leaving its viewer both longing for and rejecting patriotism.

Cheffi describes this piece as “one of the most important in the series”. Arguably, its importance stems from a sense of internal chaos that was familiar to her, but a chaos that became organised as she took control of the elements that made up her identity. 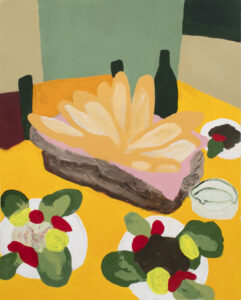 The series was also not short of Tunisian Scenery-esque paintings—which might be visually overshadowed by the slew of striking portraits, but their significance in showcasing Cheffi’s solemnly consolidated cultural identity is profound.

In one piece entitled Crappy Fancy, Cheffi painted a kemya (Tunisia’s standard appetizer made of bread, a serving of harissa, and olives). It rarely varies in flavour, but efforts are always made to enhance its aesthetic appeal. It’s the kind of thing you’d highlight only once you’ve observed it over the course of time.

“I don’t feel that longing to belong anymore. I feel comfortable,” she confirms.