Pushing The Boundaries: Egyptian Designer Nada Hesham Touches Base On Creativity, Business, and The Region

The world of art and design usually leans on Eurocentric modes and models. The philosophies of the people that write the textbooks are the same philosophies which we are, unfortunately, also taught here in the region. Although some of it may be good, perhaps even interesting, it ultimately feels like I’m just flicking through Pinterest. Think: Whitewashed, one sided, and usually devoid of any cultural identity.

Cairo-based graphic design studio 40Mustaqel feels like a breath of fresh air. Aiming a little bit higher than the norm, the studio uses calligraphy, Arab culture, and kitsch to investigate what defines design as Arab. Visual cues of the Palestinian liberation sphere, referencing prominent Middle Eastern creative and cultural figures, and what’s more, having fun with it, perfectly embodies the creative and stylistic values under their roof.

After seeing its designs around the Cairene streets and in exhibitions alike, we decided we needed to meet the people at the forefront. We had the pleasure of sitting with founder and creative director Nada Hesham to learn about her and what really is the motive behind one of Egypt’s coolest design studios. 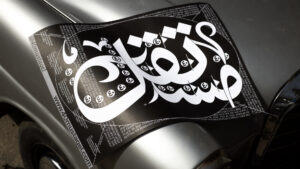 When did you start?

In high school, I guess I knew I had a passion for this thing. I always wanted to be an interior designer, but I didn’t have comprehensive knowledge of what it really takes to become one. At university, I studied graphic design, because they didn’t have interior design as a major, and here I am now.

At that point, I really got the idea of design being this interdisciplinary sector, where you can really shift and move between one thing and the next. So, it wasn’t a big difference from what I initially thought the design would be.

Pretty much! From the initial stages to where I am right now, things happened pretty organically. There was no major decision making to it, it just flowed. And then I graduated.

I had two big projects in my pocket, the first Khotout West El Balad, which won us a D&AD Pencil for our work, and secondly, I was one of the founders of 100 Best Arabic posters.

I then started freelancing with JWT. I was never a full timer though. At the time, everyone worked in agencies as a starting point. I freelanced for a couple of gigs, and I kind of knew I’m not so comfortable in that sphere… nothing against them at all. I learned a lot actually. But maybe the whole advertising aspect of design was not really for me.

How did you get into creative direction?

I joined Rise Up. They work with startups and entrepreneurs, and it ends with a big summit where everyone comes in and there are a couple of talks and workshops. I founded their design unit, I supervised architects, spatial designers, as well as graphic designers.

That experience taught me that macro vision is more important than knowing the technicalities of everything that’s happening. It was a good beginning for me to understand what creative direction was really all about. It was like letting go of the idea that I have to do everything, craft-wise. I knew I had something more to bring to the table than just maybe illustration or typography. So, I’d say this was a nice milestone.

How did 40Mustaqel come to life?

I was freelancing, just from home and it started to affect my mental health dramatically. So, I rented the space, which is the same space we’re in right now. And I was like, you know what, maybe I can work with another person to just handle this number of projects. Then I hired Hussain Salem also as an art director, and late Mina George. It really just grew from there. Super organic.

There was this need to have a name because I did not feel comfortable taking credit under my name while I had others working for me. Also, not to over romanticize the idea too much, but it made a lot more business sense to call the business something unrelated to me, that way it’s seen as an entity rather than just a design studio. That’s how 40Mustaqel was born. 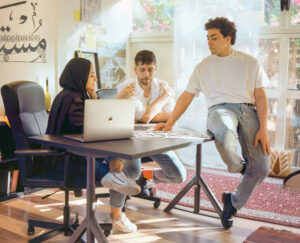 The thing that really draws me to 40Mustaqel’s designs is that it seems very homegrown – would you describe it as that?

It’s intentional. I think the whole idea was to create our shared vision. We all went to foreign universities, so we were educated from a European perspective. Most of our professors were white people, and as much as I appreciate that, it kind of dismissed a lot of our Arab identity.

We were hearing the term decolonizing used a lot. But no one really kind of walked us through how to do that. So, it became kind of a daily practice for us to dissect what it really means and push our boundaries.

For instance, we’ve been putting together a bilingual publication, and Hussain was saying, the orientation of the book needs to be from right to left, Arabic in that sense needs to win, because the exhibition is going to be in Ramallah.

I think it’s that interest in dissecting what we know to be “normal design.” Systems of design, orientation, alignment, and eligibility are what’s known to be good design on the daily, however these things are a lot more Western in philosophy.

It is questioning this normative decision making that we were educated under, and trying to find a way around it, or find a way to redefine it. Making it cool is kind of part of that anti-thesis, because you’ve been subconsciously thinking of Arabic as something that weighs down the design and kind of lean with it towards the non-cool things.

We do not live in a vacuum at the end of the day. But we try to be conscious about our understanding of what’s good and what’s not, and how does that relate to us as individuals and our identity as a whole.

What’s your favorite project so far?

I think I always go back to our studio’s branding. For the launch campaign we made a tote bag.It opened up a lot of opportunities for us and I knew it was the right decision when clients approached us and started mentioning the bag. So, for me, it kind of checks the emotional side of things, because this is my baby coming to life, but also because it’s hands on proof that we positioned ourselves in the right sector, or in the right world in which we want to work. So, I always go back to it as a reference, it’s a good exercise and a good reminder of what a piece of design can create, based on the reaction you get from it. 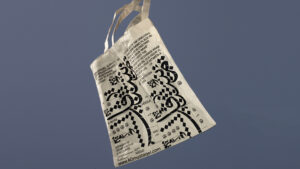 I actually love that tote bag! What’s the dream for you guys?

There’s the split in my head between business and creative work. I feel like I aspire to have a sustainable business. On the other hand, creatively, I think with a strong team, who I’m so proud of, more self-initiated projects where we put our personalities and our philosophy towards design, without even having any clients at all in the equation. The studios’ growth and our creative growth are our goals.