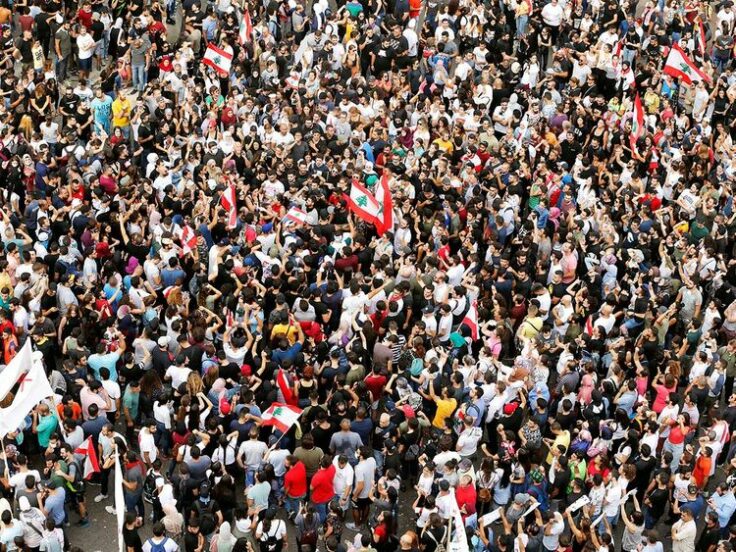 Everything You Need to Know About Lebanon’s Protests

The nation is on the brink of a revolution

For the fourth day in a row, tens of thousands have taken to the streets of Lebanon for nationwide anti-government protests, the country’s biggest demonstrations since the Cedar Revolution 14 years ago.

Public dissent began last Thursday after a new tax was announced, which would have levied a daily charge on calls made through WhatsApp. The tax was scrapped just hours after the first demonstrators took to the streets. But the protests continued.

What began as an anti-tax protest quickly gained nation-wide momentum, sparking a fully-fledged movement. Closely resembling the 2011 Arab Spring protests that led to the ousting of North African dictators, thousands are demanding the demise of the Lebanese government, which has been unable to find solutions for the nation’s economic crisis.

Crossing social and sectarian lines, Muslim, Christian, Shiite and Druze protestors of all social classes are uniting to target Lebanon’s elitist ruling class, dubbing them ‘thieves’ and calling for an end to their rampant corruption.

Lebanon’s economic situation has been in a dire state for over two decades, with a national debt that currently stands at $86 billion, 150 per cent more than the country’s gross domestic product, and rising (one of the highest debt ratios in the world).

Demonstrators are raking to the streets holding Lebanese flags, but in an unprecedented, yet distinctly Lebanese move, the rallies have turned into full-blown parties, complete with DJ sets and crowds dancing whilst chanting for the fall of the government.

You have to watch this , protesters in Tripoli turning the demonstration into a big party with a DJ and singing a song that goes “ Yala Bye” as in “ Come on leave “ referring to the politicians #Lebanon #LebanonUprising pic.twitter.com/OK1lAz3Ym5

And as of Sunday, clean-up movements have erupted throughout the nation, with people taking to the streets each morning for a cleaning rally, picking up leftover trash ahead of the next day’s planned demonstrations.

The protests have already led to one party’s resignation. Four members of the Lebanese Forces, (a Christian political party) have quit the government after the third day of protests. On Friday, Prime Minister Saad Hariri pledged to announce reforms by Monday. Despite this, protestors have called for a nationwide general strike taking place today.