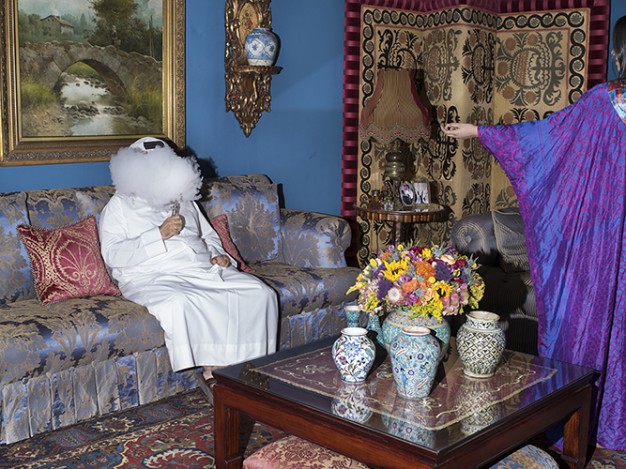 The Emirati photographer is making her mark

“I used to record Nickelodeon on VHS tapes during trips to the US in the 90s and bring them back to the Emirates to watch”, Farah Al Qasimi told us last March. The Emirati artist’s relationship with the US has dramatically changed since then, after having moved to Brooklyn.

This month, the 28-year-old will open her first exhibition in the US (and her biggest yet), entitled List Projects: Farah Al Qasimi, which will open on July 30 at MIT, where the artist will premiere her first film alongside a selection of her most recent photographic works.

Entitled Um Al Naar, (or Mother of Fire, in English), the 40-minute video looks to the supernatural, following a jinn in a reality TV-style monologue, set during the centuries of Portuguese and British colonial rule in the UAE’s northernmost emirate, Ras Al Khaimah.

Also on display will be a series of portraits, including Living Room Vape, taken in 2017 and A’s Reflection, which features faceless subjects set in staged intimate settings – both of which play with the concept of camouflage whilst simultaneously putting to question the concept of identity and gender in the Gulf.

Known for her richly textured photographs, Al Qasimi has made a name for herself over the years for her unabashed exploration of the concepts of representation and classism. As for her style, the artist’s work falls somewhere between documentary photography and editorial, with a visual language that details her Emirati background and life experiences abroad.