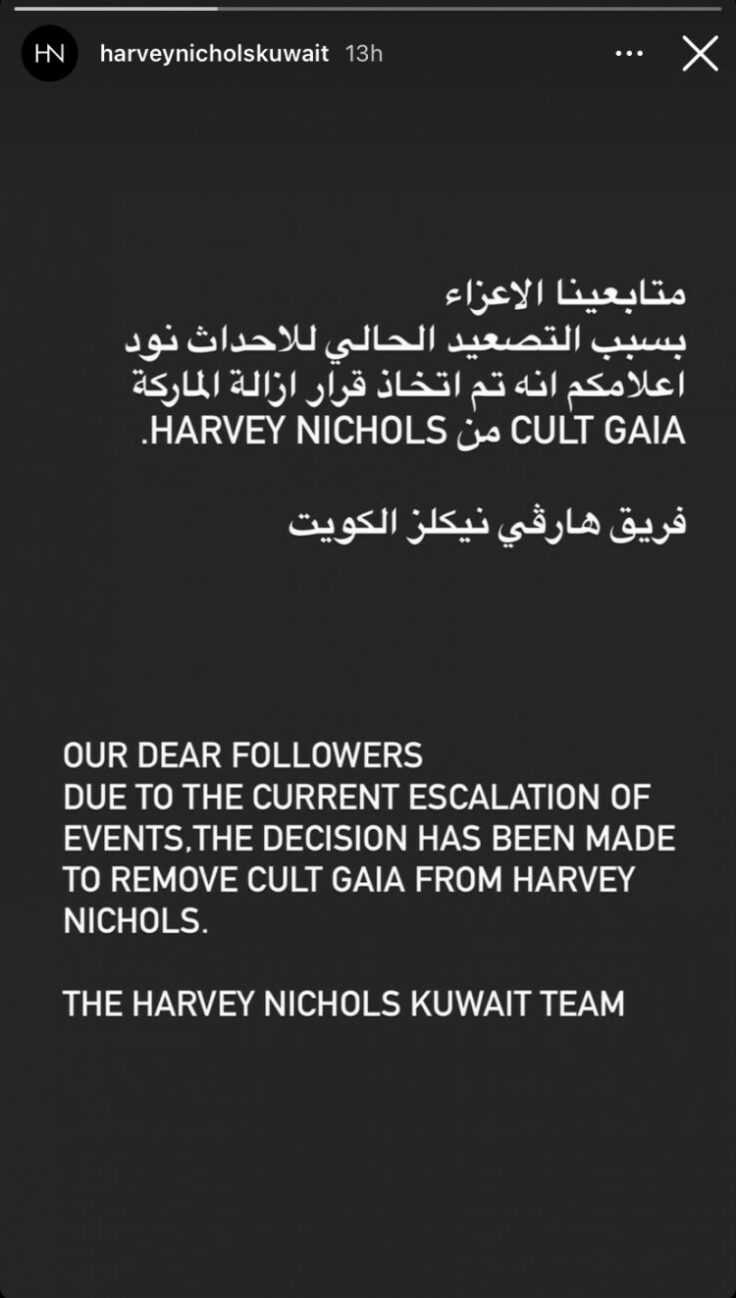 The Fashion Brands Standing Up for Palestine

Want to effectively support Palestine? Joining the ‘Boycott, Divestment, Sanctions’ movement is one way to do it. Their call to action urges to boycotting products from Israel’s colonial settlements and brands supporting the Israeli apartheid, and Harvey Nichols Kuwait is the latest to do so.

The luxury retailer is removing LA-based brand Cult Gaia from its stores following statements made by the brand’s founder Jasmin Larian in support of Israel.

She took to her IG to repost a photo stating “I support Israel’s right to defend itself” and said in her stories: “I am seeing so much misinformation on social… One-sided and spreading hate. Please educate yourself on the full story before reposting. I’m praying for everyone on both sides who are a victim of this violence.” 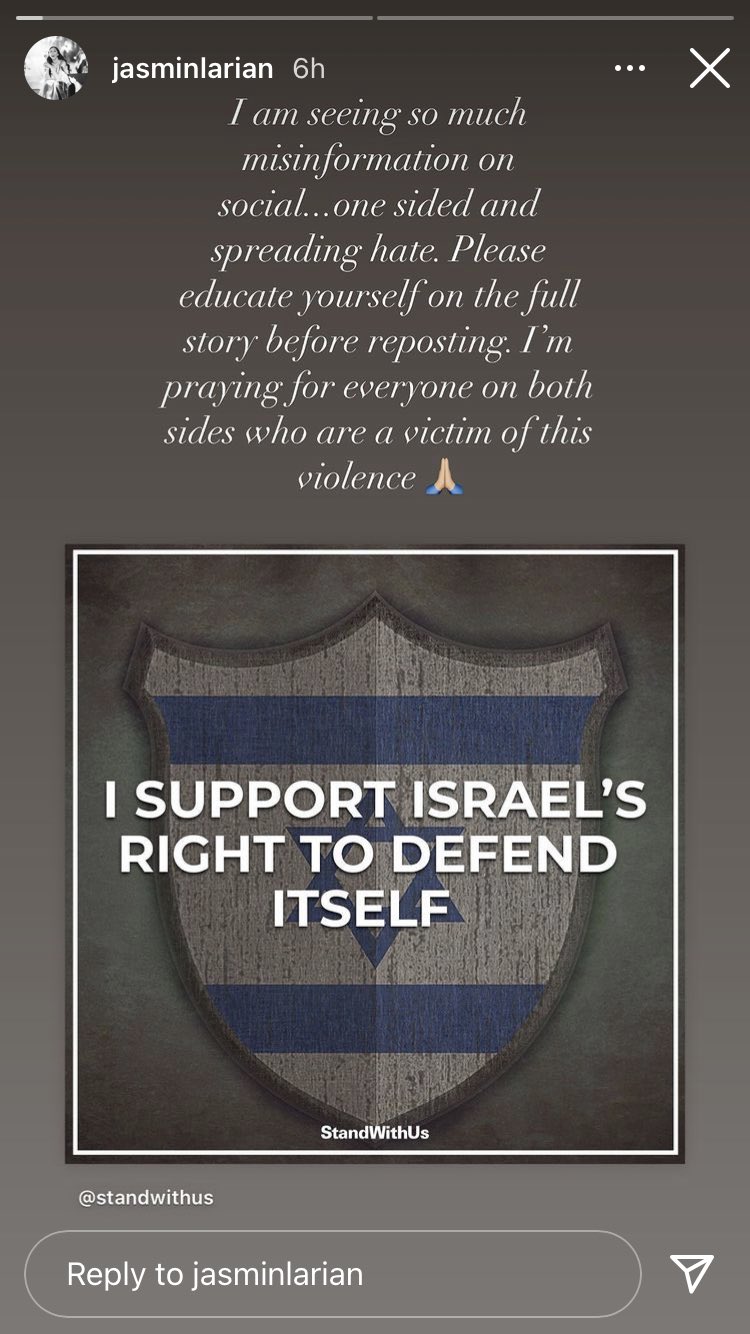 Larian immediately received backlash from users who pointed out the harmful both-siding in her post, a narrative that is particularly misleading as it neglects the asymmetry of power between Israel and Palestine. Demands to remove Cult Gaia from department stores then followed suit. 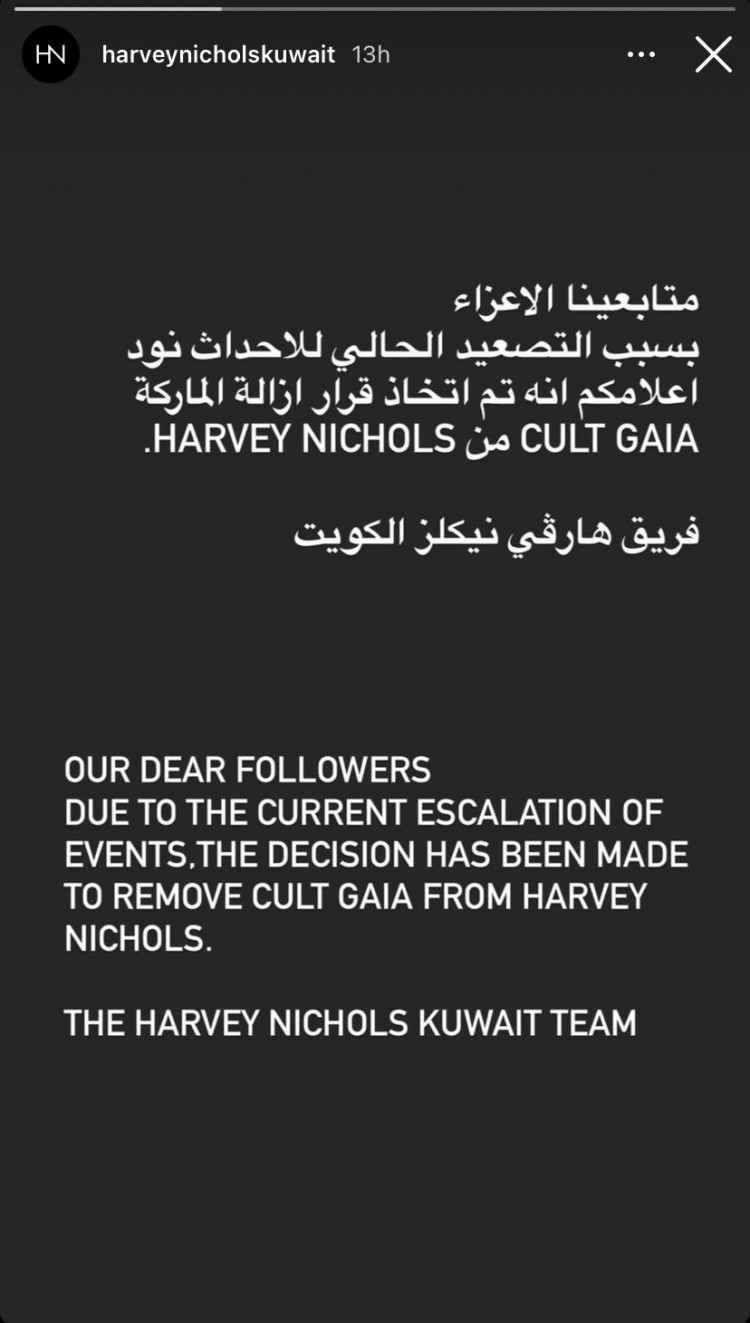 But while some have chosen boycotts to stand up for Palestine, others have turned to fundraising. Namely, Algerian-French model and boxer Younes Bendjima, who has released a special t-shirt in the colours of Palestine through his Paris-based design studio Studio FY7.

Bendjima has teamed up with AWGE’s creative director Kamil Abbas once again (the duo teamed up to drop Yemen-branded t-shirts to aid Yemeni charities back in June 2020). All proceeds from the Palestine t-shirt sales will go to charities including Lifeblood Foundation and Middle East Children’s Aliance.

Palestinian designer Meera Adnan Albaba is also joining the movement. The Gaza-based creative has started a Gaza Fund Relief on fundraising platform LaunchGood. The campaign now has a target of $50,000 and will help non-profit Islamic Relief USA to provide emergency aid for the victims of the Gaza attacks.

Another major brand to speak up about the issue is Huda Beauty. Huda Kattan, founder of the cult beauty brand took to her IG to call out social media’s shadow ban on Palestinian content and urge people to unite against the injustice.

“For the first time ever, we have been given the gift of social media which is the equal opportunity to spread news and to spread things how we see them, but that’s not actual. It depends on which side you’re fighting on actually. Because if you’re on the ‘wrong’ side, it’s going to get hidden or deleted or nobody’s going to see it,” she said.