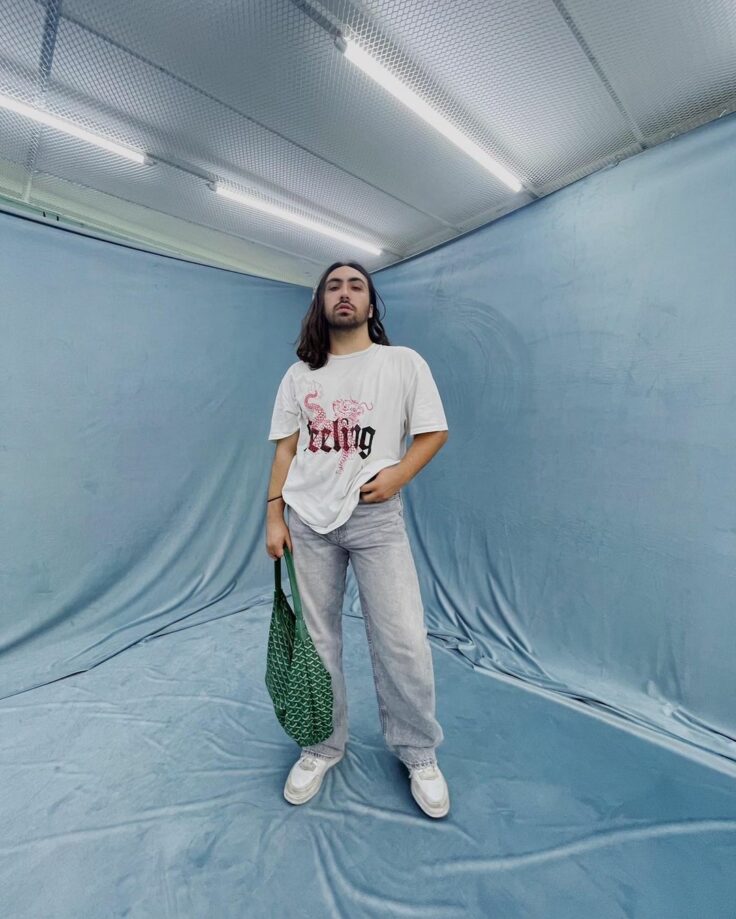 Paving his own way

Jordan isn’t necessarily the first place that comes to mind when thinking of the region’s cultural hubs. In popular folk culture, there’s an old adage that says “if Cairo reads and Beirut publishes, then Amman smokes”– a statement that should be enough to understand what daily life must be like when living in the Hashemite Kingdom all year round.

Recent years have seen a wind of change try to blow these commonly held opinions away though. A new generation has made it its ambitious mission to challenge this status quo and breathe life into the typically calm and quiet country. Amongst this young talented cohort of creatives stands Jad Toghuj, a 22-year-old stylist and creative director, hailing straight out of Amman, that’s turned his love for fashion into his bread and butter.

“My story with fashion began when I was young as I used to be a gamer. I was addicted to The Sims and my favorite bit about it was being able to customize your own character’s fits. I’d skip all the other tasks just to spend my time doing that,” he recalled.

“It eventually lead me onto the path of digital fashion as I’d design virtual shoes, accessories, and clothes on the game and slowly developed a thing for it,” Toghuj added, revealing that he would eventually go on to launch his own 3D brand called Jurassica, which reached one million designs downloaded last year. “It helped me understand and gain decent experience on how to make patterns, pick colours, and play with silhouettes before getting the opportunity to do so in real life. And it’s through my brother, who’s a make-up artist, that gave me the initial push to start experimenting with friends and then eventually models,” he added.

If anyone thought that playing video games won’t take you far in life, let Toghuj prove you wrong.  Sure, his first steps in the industry weren’t necessarily the steadiest nor the most conventional, however, through hard work and determination, the young creator has made his presence noticed through an inclusive vision of fashion many others involved also now subscribe to.

“My entry into the industry was quite difficult as I’m self-taught. It was a constant battle to prove to everyone that I indeed do belong even if I got my knowledge through digital fashion first,” he shared, adding, “Social media was obviously of great help as I just started styling myself and posting pictures online, then with friends, until I caught the attention of a photographer here in Amman. It was good exposure, but along the way, I took a step back to learn the basics myself, go in-depth with the knowledge I already had and then from there, the rest is history.”

“In the few years that I’ve been doing this, I’ve met some great people. It’s like there’s been somewhat of a renewal through a new generation, that I believe to be part of, that’s taking over and that’s proudly representing Jordan,” said the young creative. “We’re all growing together although it’s not always easy. It comes with a certain level of responsibility as we try to focus on the experimental side of fashion, which involves working with some sub-culture and some marginalized communities, which isn’t always accepted or seen in a positive light,” he shared, before adding that he doesn’t “blame those that took on the opportunity to leave Jordan for a better life” though it’s not something he is considering himself.

“What I’m trying to build, alongside my long-time friend Zaid, is a scene that can sustain itself, to develop an industry here and prove that we don’t need to go abroad to have a place in the world of fashion,” he said.

When asked about what keeps him going at the moment, the 22-year-old replied: “At this point, I want to keep on experimenting and further understand the mediums I have, especially since Amman is no big fashion city and it’s difficult to attract designers here, so we have to recreate looks with locally sourced materials to learn new techniques and ways to create.”