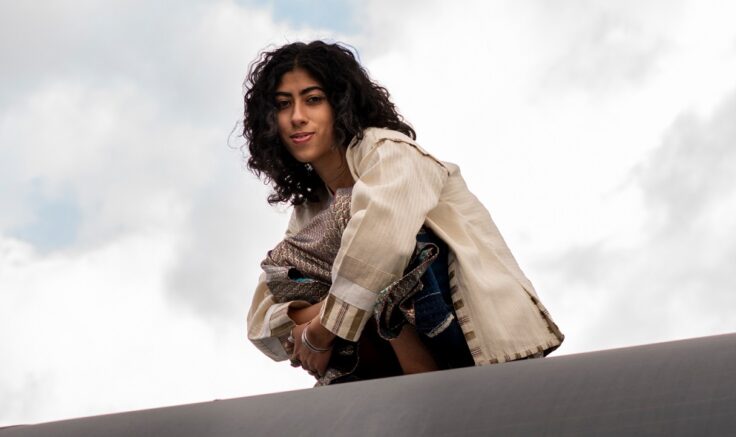 Felukah’s Latest Track Is an Ode to Arab Identity

Her collaboration needs to be carefully listened to

Not many would expect a former medical student and a creative writer to collaborate on a track. What do they have in common ? Exploring the confusing meaning of being an Arab through music.

Egyptian hip-hop queen Felukah met her Palestinian-Jordanian equivalent, The Synaptik, half way on a very engaging and purposeful track. The duo was initially scheduled to share the stage in Camden’s notorious Jazz Café earlier this summer to debut the track, but the event’s postponement did not impede on their eagerness to reveal what both have been cooking behind the scenes these past few months.

Commissioned by MARSM, an Arab-centred and UK-based event producer, for Shubbak Festival in London; both tracks released recognise some of the region’s main troubles— namely identity and self-awareness. Navigating through both realms in rhythm and flow whilst remaining true to their respective sounds, the slow-tempo and fuzzy beat carries soothing auto-tuned voices and harnesses a powerful message at the same time. Deep in meaning and interpretation, both artists frame their memorandum in a global context that is now more relevant than ever.

Pondering over the self while hopping between both of her mother-tongues, English and Arabic, we sat down with the American-Egyptian flag bearer Felukah to hear her perspective on music in the region, steering between identities and dual-cultures and questioning her future plans.

We’re past the halfway line of 2021 after what was a hell of a year to say the least. How have you been riding the wave so far ?
It really has been one hell of a year and I’ve honestly learned so much because of it. Despite all the setbacks, the social climate of the pandemic has humbled me and allowed me to hone my focus. I’m staying busy in the studio and drafting content that reflects my current reality. The post-pandemic world is nothing like the world we once knew. Vulnerability and existentialism are finally socially acceptable things to be.

This is one of your first major collaborations with a fellow Arab rapper and artist from the region. Why begin this new adventure with The Synaptik ?
I was so glad when MARSM hit me up about this collaboration with The Synaptik. I’d liked his sound before but didn’t think us meeting on a track was going to happen anytime soon, let alone two tracks. I’m really happy about the way they turned out. The future for Egyptian and Arab artists in music is an exciting prospect and I feel honored to be a part of it.

You released a taster of the collaboration a couple weeks back – Nefsi – a track that carries two meanings: on one hand “myself” in standard Arabic and “I wish” in Egyptian vernacular. Seemingly exploring the realm of identity and the self, why such emphasis and more importantly why now ?
“Nefsi” is really an ode to anyone who feels trapped in their society and longs to be themselves. I’ve always found this realm of understanding identity and one’s place in the social climate of critical importance. This past year was not only hit by Covid-19, but also by the rise of the #MeToo movement in Egypt. It’s been intense overall and “Nefsi” is my declaration to be nothing but myself cause that’s who I have to stand by.

We’ve got five months left before tipping into the new year. What can we expect from you in the second part of this year’s calendar ?
I can’t wait to share this new music I’ve been working on with the rest of the world. Listeners can expect a new project in the late fall; where I’m not holding my truth back for anything. Egyptian sounds and samples are in the mix and my secrets/dreams are laid out on a platter.