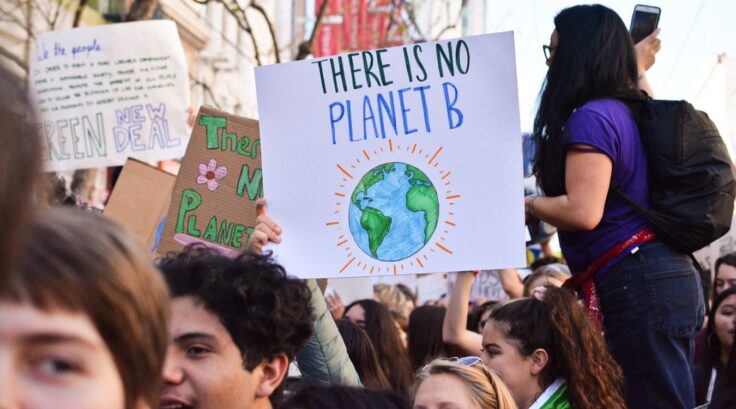 “for once I no longer feel alone”

Australia’s wildfires have become a symbol of the unflinching realities of climate change. Fires destroyed an area more than twice the size of Belgium, killing 18 people and destroying thousands of homes.

According to the World Economic Forum’s annual report, for the first time in the history of the survey’s 10-year outlook, ecological threats dominate the top five long-term risks.

How will we save the Earth? Will we actually live to survive climate change? These are the questions countless Gen Z are asking themselves. And that’s natural. Growing up in a world heading for an epic climate catastrophe isn’t just alarming—it’s heartbreaking.

Not a day goes by without catastrophic warnings being littered across our screens declaring the shrinking number of years we have left to minimise the climate change damage we’ve caused. Impending extreme weather and natural disasters are becoming irrevocable, and the Middle East and North Africa will not be exempted.

But according to Amnesty International, 63 environmental activists, journalists and researchers were arrested in the region in 2018. So it raises the question: how can Gen Z Arabs really pursue change when they fear being punished for doing so.

We caught up with six young Arabs to find out how they’re coping with the anxiety of climate change.

Nour, Lebanese
“The only way for me to cope with my stress is by working towards starting a business that makes me feel like I’m making a difference. That’s my ultimate goal. I also feel like we all need a trance to get out of the constant flux of depressing news. In Beirut, where I live, nightclubs are the only businesses not going out of business these days. I’ve noticed that I sleep a lot more too because that’s the only time my mind isn’t running around. I was feeling so bad the other day; I ended up sleeping for 12 hours.”

Yassine, Moroccan
“Being Moroccan by blood and French by upbringing, I have always felt conflicted between these two worlds that are so geographically close but yet so far ideologically, politically and culturally, and especially when it comes to climate change. On one hand, I have experienced life in the West, which, on surface, appears to be more responsible, and aware of the ecological disasters taking place around the world as well as the urgency of the situation we have to deal with. On the other hand, I feel so much pressure in having to deal with the fact that the Arab world carries the heavy reputation of being one of the most polluted areas on the planet. Do I blindly fall into the orientalist trap of calling my people primitive for being unaware? And that’s when it clicked that everything happens for a reason. Yeah, I agree that most MENA countries could do better and improve their ways, however, holding them single-handedly responsible for what is going on would be completely delusional and irrational considering Europe’s history in the matter. Are we supposed to forget that the main reason why the West still has the upper hand over the so-called “third-world” is because of the industrial revolution that entailed mass deforestation, insane levels of pollution and water poisoning? I try and improve my ways as much as I can but I also want to make sure that if things go south, that everyone gets their fair share of blame.”

Kenza, Tunisian
“I’ve been doing my best to reduce my footprint by applying the four R’s (reduce, reuse, recycle, recreate). I don’t litter. I walk by foot as much as I can, or use public transportation. If I do drive, I try to get everything done in one trip. I believe learning about permaculture, and growing your own food is extremely important in combating climate change. Getting involved in your local community for trash clean ups, planting trees, composting, saving seeds and cleaning waterways play a huge part. Buying second hand anything, reducing the consumption of meat and dairy; donating to indigenous peoples, utilizing renewable resources (solar, wind and hydro) is important. I find the climate crisis protests inspiring because people from around the world are identifying with themes like Earth justice, and wish to move past humanities’ shortcomings like burning fossil fuels and pollution. We have the technology, the knowledge, and the love in our hearts to create a safe, clean and sustainable world. It’s just a matter of time.”

Ayat, Jordanian
“My parents are vegan and have influenced my brothers and I to (mainly) eat plant-based. It’s crazy to think that as an Arab household we stopped eating animal products since many of our traditional dishes are meat based with some sort of dairy component going on as well. But my mama is amazing, she’s discovered all of these incredible alternatives to make the food still taste like home. In changing our diets and committing to seriously reducing food waste as a household, I think we’ve taken some major steps towards being more environmentally conscious. It’s these little things, like basic eating and domestic routines that will slowly but surely minimize our carbon footprints. Even though we mainly eat plants, we still feel and eat like Arabs.”

Khaled, Egyptian
“I don’t think I’m super anxious about the environment, because what you feel on the inside manifests, so it’s never really part of my mentality or my families for that matter to project negative thoughts about the environment. My mother raised us to be optimistic and envision a beautiful world around us. I’m more driven by hope than fear. Practically speaking, at home, we try and cut down our meat and dairy intake throughout the week. I actually turned vegetarian for the last seven months. We also don’t use plastic bottles and avoid fast fashion.”

Lamia, Syrian
“Personal actions are good, but they don’t actually make a difference on a big scale. That doesn’t mean we have to become hopeless though. I think the answer to climate anxiety is collective action. Taking part in protests in London (where I live) and joining groups has felt so good. I’ve learnt so much on a personal level, and as a group, we have inspired so many new people to join movements—for once, I have felt like I am no longer alone.”