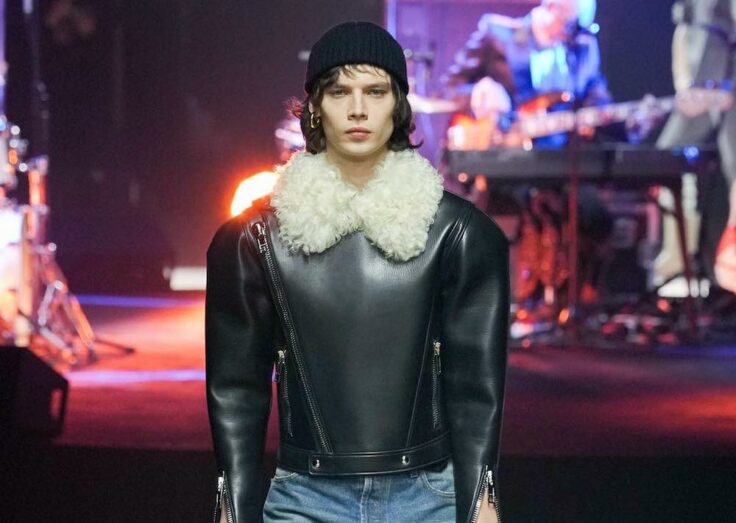 Not a pussybow blouse in sight

Milan Men’s Fashion Week kicked off in the Italian capital on Friday with the Gucci Men’s Fall 2023 show. The newly-unveiled collection comes after the sudden November 2022 exit of creative director Alessandro Michele, who has spearheaded the fashion house for the past seven-years. In a statement shared at the time, Michele reflected on the “extraordinary journey” he had been on with the luxury Italian house over the past 20 years. “During this long period Gucci has been my home, my adopted family,” Michele wrote. “To this extended family, to all the individuals, who have looked after and supported it, I send my most sincere thanks, my biggest and most heartfelt embrace. Together with them I have wished, dreamed, imagined. Without them, none of what I have built would have been possible.”

Following the Italian designers sudden exit, everyone was wondering what a post-Michele Gucci would look like, and today we got our answer. During his tenure at the storied house, Michele was a big purveyor of boundary-crossing, subverting male archetypes, and exploring femininity. And while today’s highly-anticipated collection suggests that the blurring of gender boundaries that Michele introduced during his stint will continue to inform the brand (which makes sense considering it was designed by the in-house creative team who worked with Michele), this season, Gucci was less romantic and more rock n’ roll.

Set to a live soundtrack courtesy of Marc Ribot’s Ceramic Dog, male models emerged wearing low-cut shirts sans anything underneath that exposed their chest, tight, PVC trousers, jeans embroidered with crystalized interlocking GG motifs, puffer jackets, sheer tops, collared boiler suits embossed with the brand’s logo, and silver, sequin tank tops that shone just as bright as the overheard runway lights. The traditional suit, the most conventional expression of masculinity in fashion, was reworked in the form of oversized blazers worn with floor-grazing skirts with high slits paired with trousers underneath or worn alone.

Meanwhile, there wasn’t a pussybow blouse or ruffled collar in sight this season. For Fall 2023, maximalism took the backseat, shifting to sleeker and easier-to-wear pieces. Think: pullovers, baggy jeans, and tailored jackets. A standout piece included a suit with concealed hook plackets so you can detach the arms and legs that we’re certain we’ll be seeing everywhere come red carpet season.

All in all, while there was some remnants of Michele’s Gucci, the latest offering feels like a big departure from what we have gotten used to from the label. Online, reviews are mixed with some hailing it as the best collection that Gucci has ever produced in recent memory to others lambasting it, meaning that we could see a potential shift in the type of clientele this new era of Gucci will attract.

After the model’s last turn down the circular runway, one instinctively, if even for just a second, expected Michele to emerge from backstage for his final bow, however the lights immediately dimmed signaling that the post-Michele era has officially began at the company.