In 2012,  Al Mansour directed her first critically acclaimed – and controversial – feature film Wadjda, which told the story of a fierce young Saudi girl who tries to buy a bicycle despite the fact that it is forbidden for girls to ride bicycles. At that time, Wadjda wasn’t just Al Mansour’s first film but the first film to ever be directed by a woman in Saudi Arabia. In order to respect the strict rules around women in public spaces, shooting was almost impossible – Al Mansour recalls having to hide in a van and communicate with her staff using walkie-talkies.

But six years later, Al Mansour has now made a solid name for herself throughout the industry, both at home and outside. She recently directed a Mary Shelley biopic and was appointed to direct The Perfect Candidate, a film about a female physician who runs for office in the municipal election and the first film to be supported by Saudi Arabia’s newly created national film council, as the kingdom undergoes unprecedented reforms.

On September 21, she made her Netflix debut with Nappily Ever After, a rom-com about self-love, based on Trisha R Thomas’ best selling book of the same name. The lead character, Violet (played by Sanaa Lathan) appears as a successful woman, who suddenly sees her perfect life fall apart after breaking up with her boyfriend. The film explores her journey and follows her relationship with her hair, as she tries to start over, find and accept herself, by shaving her head after years of straightening it. 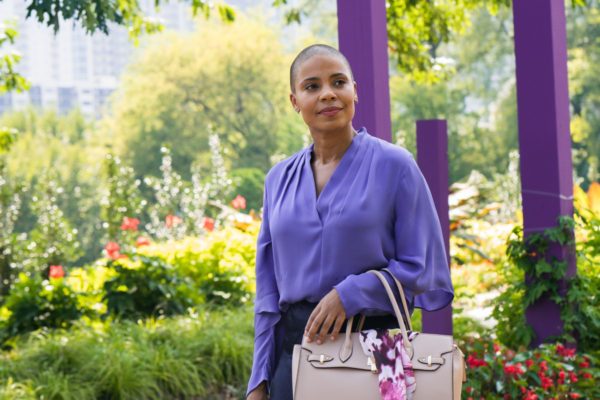 While the movie is droll, it nonetheless subtly addresses a fundamental topic that resonates with innumerable women who feel like they have to conform to western beauty standards in order to feel beautiful.

MILLE caught up with Al Mansour to find out what motivated her to direct Nappily Ever After, her place in Hollywood and social change in Saudi Arabia.

You grew up in a country where cinemas were banned up until not too long ago. How where you introduced to cinema and what are your first film memories?
I grew up in a small town with 11 siblings. My father had to keep us quiet and so I started to watch a lot of films. I remember watching Snow White and was mesmerized. There was pretty much nothing to do in my town; I was bored. Watching films it made me feel like I belonged to the world.

When I grew older, I started making amateur short films with my brothers and sisters. This was the place and moment where I felt like I could really be who I am.

What drives you to make films and tell stories?
I don’t really have a mission. I have a passion for films though, making them makes me happy. But I don’t want to be invisible, that’s important to me. Through filmmaking, I can share whatever I want to the entire world. I want people to connect with my films and react to them. I also want to show strong female characters. I feel strongly about women who own their destiny, who prevail no matter what.

With Wadjda, you told the story of a Saudi girl. In Nappily Ever After, you tell the story of an African-American woman. How did you identify with her?
This film is a big statement about race. The hair was only a metaphor, through which we tell a story about acceptance. As a Saudi woman, I totally identify with her. In Saudi Arabia, you need to have beautiful, long, silky black hair. That’s all you see in commercials. We must all learn to just be ourselves and build a soul.

Why do you think speaking about representation matters today?
Simply because the world is getting more and more diverse. Standards can’t be universal anymore. It’s great that people are finally recognizing that and pushing for diversity. While middle-aged white men dominated the industry, there have never been as much opportunities for women in Hollywood than today.

So it’s a good time to be in Hollywood for a Saudi female director in 2018?
Yes, I feel very lucky to break into Hollywood at this time when people are looking for diverse voices. There’re a lot of good subjects and interesting characters. Female filmmakers can now lead huge projects and budgets, which never happened before. But we’re not completely there yet; it’s a journey.

Are you afraid of being tokenised?
A lot of different scripts come my way, and they’re not only about Muslim girls breaking boundaries. I don’t like to be put in a box and I won’t restrict myself. It’s true that people tend to associate you with particular stories, but the reality is that it’s actually important to me to tell these stories.

A lot of things have changed in your home country since you started your career. How do you feel about the recent progressive reforms?
Saudi Arabia is going through great times. Women can now drive and art is celebrated. Encouraging freedom in the arts and culture is fundamental and this will have a great influence on society. I’m super excited.