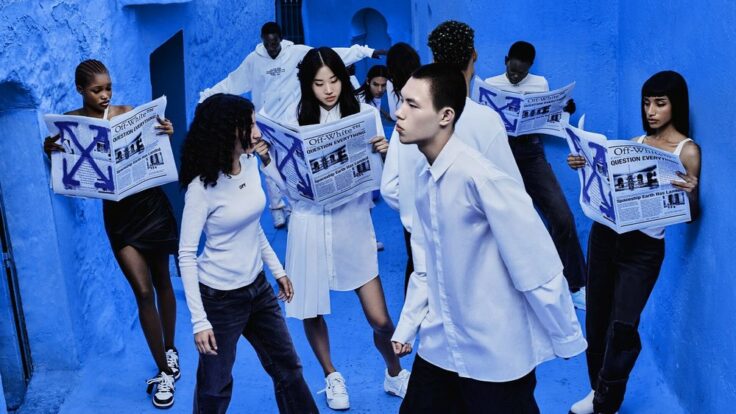 It was shot entirely in Morocco’s Chefchaouen

Walking in the late Virgil Abloh’s footsteps, Ibrahim Kamara, Off White’s newly-appointed art and image director, has unveiled the luxury label’s first collection since the untimely passing of the founder in 2021. This will also mark Kamara’s official debut for the Italian maison since joining in April.

Lensed by Brazilian photographer Rafael Pavarotti, the brand’s Fall 2022 ready-to-wear campaign, designed by Abloh, sees the creative team and models descend upon the Moroccan south to shoot the four-arrowed brand’s latest visuals. Kamara’s choice to use the North African kingdom as the backdrop for Off-White’s most recent sartorial offering is anything but a coincidence. In fact, it’s purely intentional as there was a real drive to further highlight the tone of electric blue punctuating Off-White’s latest line.

This shade of chroma, already well-embedded in the brand’s DNA, is here used as a unifying element in the impassioned collection. Naturally, it’s in Chefchaouen that the Sierra Leone-born designer found his inspiration as the city, much like the pieces that make up the collection, is also best characterized and represented through the color blue— a symbol of water, food, growth, and development.

In a statement, Kamara shared: “Making a successful luxury brand in nine years is genius. It’s a feat that I admire and hope to continue building upon with a rich legacy. [Virgil] revolutionized streetwear and luxury that crosses generations and decades.”

He added: “[Virgil] showed the world that the underrepresented, the underdogs, and Black people, in particular, have brilliant minds and can push and compete equally in the establishment. He inspired hope and brought about change. Virgil Abloh was one of the freest-thinking black men of our time.”

Heavy in symbolism, Kamara’s choice of location also nods to a previous campaign by Abloh. The American-Ghanaian designer, who was the first person Black person ever to be appointed as the artistic director of Louis Vuitton, formerly set his eyes on Morocco’s blue pearl city as he shot an advertising campaign for the Parisian brand’s Spring-Summer collection back in 2020.