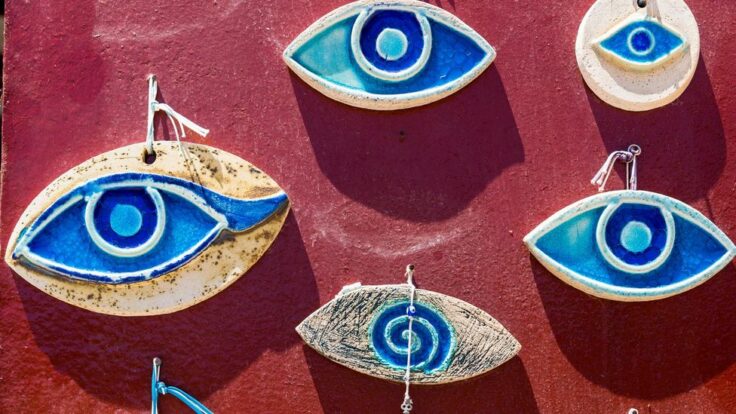 There’s a solid chance you were taught these

I like to believe that I’m a logical person, but Arab superstitions have got me in a chokehold. To this day, I refuse to whistle inside the house because years ago my devout Muslim mother told me that doing so invites the devil into your home. That’s just one of the many dark warnings I was taught growing up that, sure, might defy any sort of common sense, but were nothing out of the ordinary. Others include not pouring hot water down the drain because you might get possessed by an evil spirit and also not showering at night because— you guessed it— you might get possessed by an evil spirit.

Today, the Arab world is permeated with pre-Islamic superstitions that derived from folklore and ancient mythology. These beliefs, which are typically passed down from generation to generation, don’t really have any basis nor do they conform with scientific reasoning or Islam, which classifies any kind of superstition as shirk. Still, as a lot of Muslim parents nod along to imams warning against false idols and superstitions, they have no problem going home and lecturing their children for accidentally spilling salt or leaving a shoe upside down. And as New Age practices such as astrology, tarot, crystal healing, and spirituality, continue to trend, it appears that more young Arabs are falling victim to superstition. With that said, below, we rounded up some of the most interesting and outrageous superstitions from the Arab world.

Never look at the moon directly

According to superstition, if you look at the moon directly you will develop warts all over your face and body. But don’t worry, you can totally reverse this by throwing rocks over your shoulder.

Don’t leave a shoe upside down

In several Arab countries, including Egypt, leaving your shoes upside down is believed to bring in bad luck.

Insects in the house

In some Arab cultures if you see a moth or a beetle in the home, that means that you can expect to have guests.

How to avoid domestic issues

If you don’t want any marital problems with your spouse then you should probably never snap scissors inside your home.

Never step over someone laying down

According to my mom, stepping over someone can stop the person on the floor from growing taller and the only way to reverse such a tragedy is to step back over them in the opposite direction.

Not all Arab superstitions are bad. A lot of people believe that if glass shatters, it means that any bad vibes or energy surrounding the family breaks with it. “Enkasar el shar” is the phrase tied to any glass that breaks.

Attaching a safety pin to your clothes prevents evil eye

Plenty of anxious parents will attach a safety pin to the clothing of their newborn in case someone accidentally evil eyes them.

You must properly dispose of hair trimmings and nail clippings

Pay attention to your twitching eye

Dough on the wall

In Lebanon, the bride is given some dough to smash on the wall on her wedding day. If it sticks, it means the marriage will be successful and the newlyweds will live happily ever after, and if it does not stick, well, it’s a bad sign.