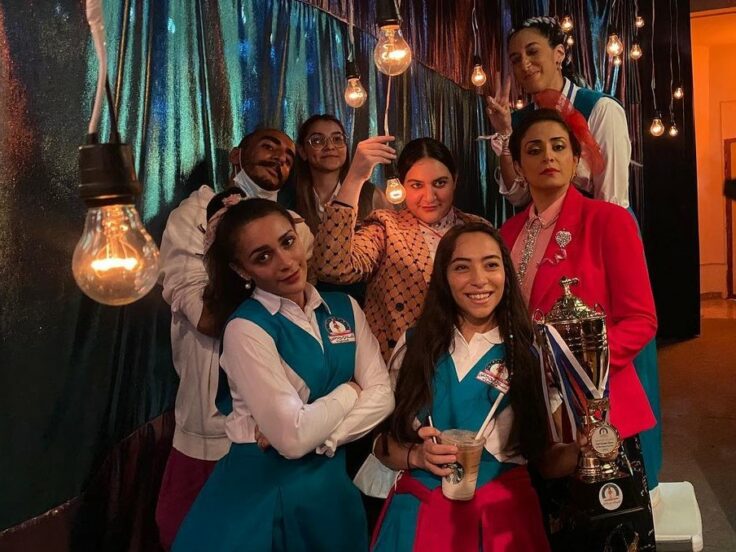 An unconventional series has just landed on the MBC’s streaming platform Shahid. And it might just be the latest addition to our Ramadan binge-watch list. Jameel Jedan is one of the latest comedy-dramas to be hailing from the Arabian Peninsula and it’s been carrying a lot of expectations and excitement on its way to say the least.

As Saudi Arabia’s first-ever show to be penned, starring and created by a Saudi woman, namely Sarah Taibah, the TV program aims at shedding light on the many realities of being a woman living in the Gulf Kingdom. Through six episodes, the forty-minute-long chapters try to document, through witty lines and dark humor, a widely shared and relatable experience that is finally getting screen-time.

The plot delves into the story of Jameel, a young woman who happens to wake up from a five-year-long coma to find that most of her life has changed and been spun on its head since she was last conscious. In that half a decade spent unconscious, women are now allowed to drive, our protagonist’s close friends have moved on to the next steps of their lives while her father is now missing and out of the family’s picture following his recent divorce with Jameel’s mother.

On a quest to weave herself back into her belonging microcosm and find answers about her parents’ unexpected separation, Jameel Jedan is also a cocktail of subtle hints and references to Saudi’s new ways of life.

“Women are usually portrayed in Saudi content as the love interest or wife or mother, you don’t see them as a flawed protagonist or anti-hero,” Taibah told the Financial Times. “It was fresh to portray an angry raw character who was unapologetically natural and didn’t try to look different.” she continued.

Since 2015, Saudi Arabia is almost unrecognizable. The country that was formerly ultra-conservative is now growing to become region’s cultural capitals. Vision 2030 adamantly has something to do with this unprecedented wave of change. The ambitious framework has come into play, efficiently put into practice and effectively led to a slew of amendments that are very visible through Saudi’s now-budding entertainment industry — a sector that was banned from flourishing mere years ago.

Now provided with spaces and instruments to elevate their voices and share their own intricate stories, Saudi women are finally able to feel and be represented on the silver screen by sitting behind or also in front of the camera. Groundbreaking in its sole essence, Jameel Jedan is here to disturb, challenge and highlight the country’s recent changes while addressing some of their limits and extent.

“I’ve always loved telling and collecting stories. I am fond of keeping written secrets and memories, and I appreciate writing feelings and daily diaries from the emotional side, but in practice, I believe that we need more Saudi female voices that tell our stories in all its dimensions, as there is no one who tells women’s stories better than the woman herself.” – the multihyphenate told Sayidaty.

“Saudi women are present and have an important place today in the Saudi film industry because of its many dimensions and multiple layers. I am convinced that the Saudi woman is capable of conveying the reality of her life and raising her issues. No one outside Saudi Arabia can do that because the stories that take place behind our doors are known only to us, and we have the right to tell them, and I believe this is our time and the time for our stories.”

Refreshing and undeniably needed, the MBC-sponsored program is a visual experience that needs to be upheld and repeated from other perspectives to allow the Kingdom to sustainably move forward and keep on its path of improvement.