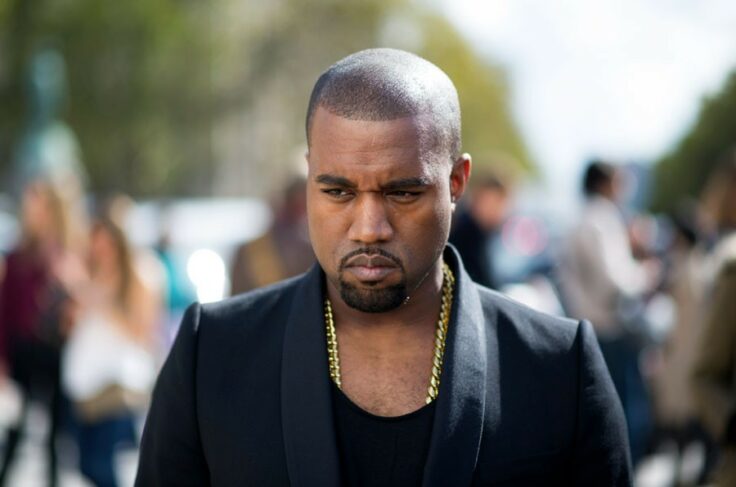 5 of Kanye West’s Biggest Feuds Over the Years

If you’ve been on social media these past few days, you would have noticed that Ye (formerly Kanye West) is in the midst of another Instagram tirade, this time against German athletics label Adidas.  The Chicago-born rapper, designer, and influencer is, once again, making headlines for the flood of (sometimes quickly-deleted) posts that have gotten the Internet creasing from the moment they made their way onto his grid this weekend.

Last time, Ye went on an Instagram rant against his ex-wife Kim Kardashian, her mother Kris Jenner, and her ex-boyfriend Pete Davidson. Now, the  multi Grammy award-winning singer and songwriter is dragging Adidas for allegedly debasing his Yeezy brand—signed under the three stripe label. Ye is accusing the brand of making decisions pertaining to colorways, shapes, and sometimes even designs without his input and even stealing his designs.

In his last tirade of targeted posts, Ye had some harsh words towards Adidas’s executive board, which includes Egyptian businessman Nassef Sawiris, giving it all he’s got to make his voice heard and rights stand.

Far from being the first Kanye West rant to make headlines, we decided to look back at a few of the times where Kanye just decided to go full Kanye.

From Taylor Swift to Louis Vuitton, here are some the most memorable Kanye West beefs in recent years:

The two rappers, and former friends, were long time associates as cultural practitioners in the world of entertainment and music — they even have a collaborative album together, titled Kids See Ghosts, released in 2018. However, since Ye’s messy divorce, things took a nasty turn between the former friends.

As some of you may know, anyone connected to Davidson, from close or afar, would have to deal with Ye’s online wrath. We all remember how chaotic the Donda release was, with artists randomly being cut off the project and sometimes even exposed for no apparent reason at all.

Kid Cudi was amongst the many featured artists that were removed from the contender to one of 2021’s albums of the year for his acquaintance with the comedian, and since then, the rappers have been going back and forth online, claiming their hate towards one another every so often. Things eventually culminated this summer with Cudi storming off Rolling Loud’s stage after being taunted by a very pro-Ye crowd, who pelted him with water bottles. In an interview with Esquire, not too long after, Kid Cudi said that it would “take a motherf—ing miracle for me and that man to be friends again.”

Amongst other turbulent relationships with brands, we can recall in 2013 when Ye called for a boycott of Louis Vuitton during a live interview because the board refused to meet with him.

Like most things Kanye, this story again has many twists and turns. After taking shots at the brand in 2013, the brand was seemingly back in the rapper’s good graces in 2018 when the late Virgil Abloh became artistic director of the luxury label’s men’s department.

Ye and Abloh were close friends. The two Chicago natives met while the late designer was working at a Chicago print shop, and they later entered the world of fashion together with an internship at Fendi in 2009. Notably, Abloh helped design the covers for Watch the Throne and Yeezus.

Their friendship also wasn’t without a little bit of controversy as West famously stated how he wanted Abloh’s position at Louis Vuitton. “Like, it’s a cool job to have. They got that platform, they got thousands of stores, they got resources. You know, I met with Hermès maybe a year and a half prior to that. I met with Bernard Arnault. We had a deal on the table that we shook on. I did some performances at the museum. It was supposed to be me,” he told GQ.

Even after Abloh’s passing there were rumors that Ye would join the brand to continue the designer’s legacy, but these rumors have yet to materialize.

Unless you’ve been living on another planet this past year or so,  it should not come as new information that Ye doesn’t like the former SNL star— and vice versa. The comedian started dating the second eldest Kardashian only nine months after she had initially filed for divorce from Ye, and it’s been a metaphorical war between the two ever since, with a lot of collateral damage as well. Soon after Kardashian and Davidson’s breakup, West shared a post on his Instagram, featuring a photo of a fake New York Times newspaper with the all-caps headline, “Skete Davidson Dead at Age 28.” He also wrote in the post, “Kid Cudi meant to play funeral but fearful of bottle throwers.”

Due to the online harassment Davidson endured from Kardashian’s ex-husband, he has decided to seek help and undergo trauma therapy. “He has been in trauma therapy in large part [due to Kanye],” a source told People of Davidson. “The attention and negativity coming from Kanye and his antics is a trigger, and he’s had to seek out help.”

Arguably one of the most defining pop culture moments in the last decade or so, Ye’s intervention at the 2009 MTV Video Music Awards gave birth to celebrity beef that’s been spanning for over a decade now. Swift was called up on stage to receive the award for Video of the Year before a drunken West interrupted her acceptance speech, grabbed the mic, and claimed that it’s actually Beyoncé that had the best visuals not only of that year but “of all time” in reference to Single Ladies.

Since that embarrassing incident, a tumultuous relationship was born with some ups, as the pair have appeared to have made peace in the past, and some downs, when West is back to randomly dissing or mocking the Texas native’s work and image as seen through another controversy that arose in 2016.

A couple of years ago, Ye released the video for Famous, in which a couple of lines and images were targeted at Swift. A model, impersonating the award-winning singer, could be seen naked, laying next to Kanye and Kim while the now-infamous lyric: “I feel like me and Taylor might still have sex / I made that bitch famous” can simultaneously be heard.

In 2016, the rapper-turned-designer released a song called Facts on Soundcloud, that was essentially just a diss track towards sportswear giant Nike, with whom he previously designed shoes for before signing to Adidas in 2013. “Yeezy, Yeezy, Yeezy just jumped over Jumpman,” went the hook of the track, where the rapper also stated that “If Nike ain’t had Drizzy man they would have nothing,” referring to Drake’s sneaker collaborations with the Oregon-based brand.

There are many rumors swirling around about why West broke his deal with Nike, however, the rapper revealed that he parted ways with the sportswear giant after they refused to pay him royalties for his Nike Air Yeezy line.