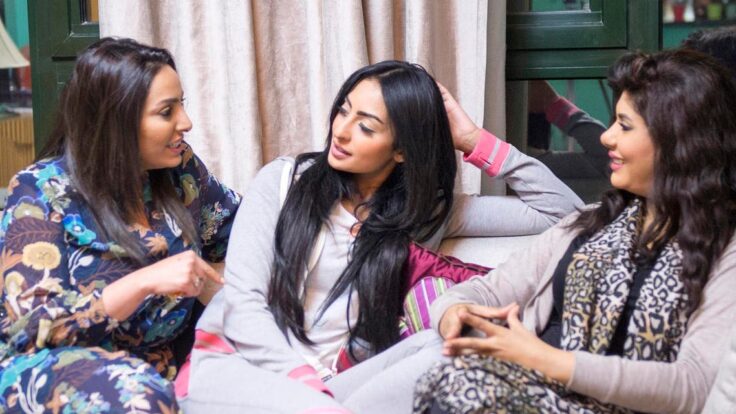 Ramadan series have been marked by two powerhouse productions along the years: Egyptian and Khaleeji. While the former naturally enjoyed a head start thanks in large to the nation’s century-old film industry, the latter had a bit of a different upheaval.

Khaleeji TV series slowly began dominating the small screens with the rise of Middle Eastern media companies in the nineties like MBC, OSN and Rotana TV channels. Of course, their broadcasting went beyond their borders, making it all the way to North Africa and ultimately, ensuring the popularity of the genre across the region.

The GCC is now behind some of the greatest Ramadan series from Kuwaiti and Emirati dramas to Saudi comedies, often portraying the realities of living in the gulf. Here, we’ve rounded up some of our favourites to binge this Ramadan.

The two legendary Kuwaiti actresses Hayat Al Fahad and Suad Abdullah meet in the drama of Al Bait Bait Aboona. The series tells the story of two divorced sisters, Halima and Naima, who live with their children at their father’s house. It is a sample of what post-divorce family disintegration looks like and its effects on the children.

The series tells the story of Abu Ibrahim who loses all his family in a fire, and thus suffers from schizophrenia for feeling responsible for what happened.

A businesswoman discovers that she is not the only heir to her father’s wealth and sets out to search for her half-brother to work together on preserving the family fortune.

Following the story of a postman in a time when people no longer write letters to each other, the Bahraini-Emirati series delves into the issues of social and domestic violence.

Starring none other than Suad Abduallah, the Kuwaiti series follows Fattoum who finds herself in the year of 2015 with her seven children all-grown up, ultimately having become strangers to her. The drama dwells on the topics of motherhood and the relationship between parents and their children.

The Saudi tragedy follows a psychotherapist who receives 42 mysterious cards everyday only to discover that they are sent by a person targeting his life and the lives of his colleagues.

Set in the eighties, the Emirati series sees the trivial conflicts of sisters and nemeses Wadeema and Haleema rise which subsequently affects their family.