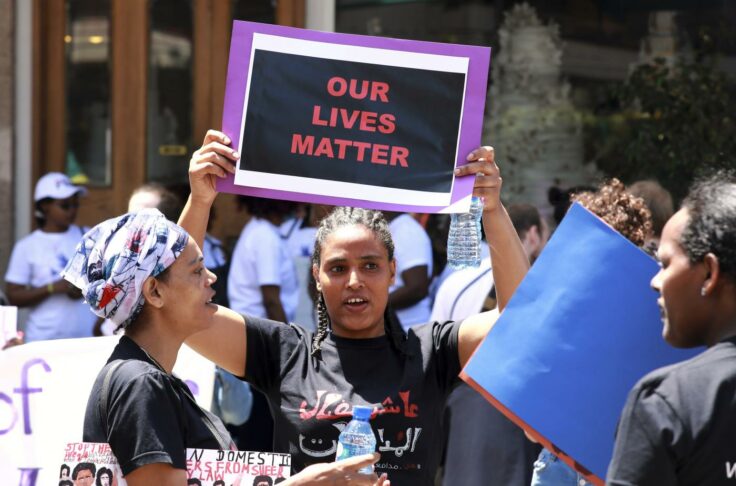 Tearing down the Kafala system head-on

Brands, media platforms, celebrities and activists. Right now everyone is standing in solidarity with Black Lives Matter and the fight against racism. And now time has come for Arabs to acknowledge that racism isn’t only an American issue. Anti-black racism in the MENA region must be addressed too.

In the Middle East and the Gulf, countries have failed to implement and enforce anti-discrimination laws to protect migrant workers for decades, which in turn have led governments to turn a blind eye to the outright abuses that workers suffer in their workplace.

In Lebanon, the abusive Kafala sponsorship system controls the 250,000 domestic workers living in the country (who are mostly women from the Philippines and Ethiopia), forbidding them from leaving their employees without losing their immigration status.

According to a recent Amnesty report, domestic workers are forced to work extreme working hours without rest days and are deprived from food and freedom – whilst simultaneously being subjected to physical and verbal abuse. They are also denied healthcare, and have their passports confiscated. In 2019, a reform plan was submitted to the Minister of Labour, but the project was aborted because of the Minister’s resignation following the protest movement.

Much like police brutality in America, the Kafala system is responsible for killing countless black people. On March 14, 23-year-old Ghanian Faustina Tay was found dead under her employer’s home in Beirut’s suburbs. And that isn’t an isolated case. On average, two workers die every week.

Fortunately a new grassroots organisation, Egna Legna, a non-religious, community-focused, feminist organisation – is working to help Ethipian workers in Lebanon, and discourage women in Ethiopia from moving to Lebanon. Egna Legna educates women about their rights and provides them with essential work and survival skills. Thanks to this newly founded organisation, domestic workers in Lebanon finally have a feminist movement on their side.

If young Arabs are comfortable speaking out about George Floyd, then defending domestic workers and calling out any form of racism at home must be at the heart of their struggle. After years of feminist and social uprisings in Lebanon, local activism needs to centre in on the country’s most marginalised group.

To hear domestic workers’ testimonies on Egna Legna, watch the videos below: