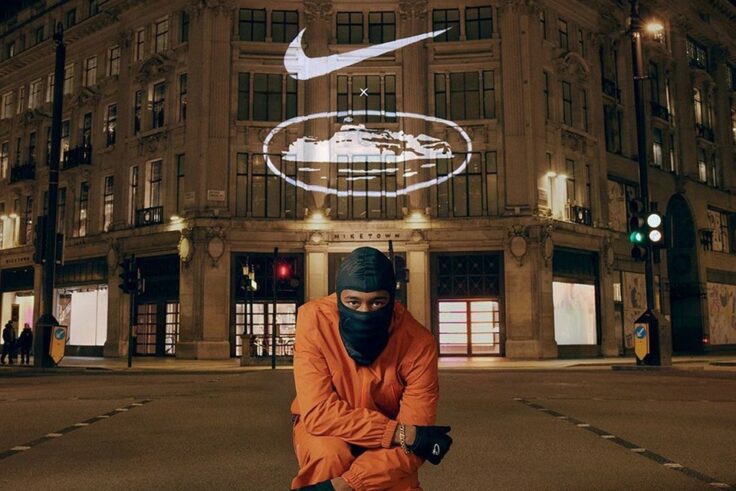 It’s become a customary practice for streetwear label Corteiz to unveil its latest campaigns in a manner that is both unexpected and memorable. In the past, the London-based brand, founded by Clint,  has implemented unorthodox marketing strategies to disseminate its latest works and spread the word about its brand, ethos, as well as the sub-culture it is trying to push forward.

Some of their most memorable advertisements-turned-viral-internet-moments include offering their sweatpants, which typically resell for hundreds, for the symbolic price of $1.00. The cult label also previously organized exchange events where customers could trade in their North Face jackets, to be donated to those in need, in return for Corteiz merchandise.

This disruptive approach has become a defining characteristic of the brand, and was once again put to use with its latest announcement. Rather than simply sharing the exciting news on the brand’s social media profiles, as one would have expected, the label chose to switch things up.

On Tuesday night, the iconic Corteiz boat logo was projected onto the Nike flagship store in London’s Oxford Street, foreshadowing the news of the brand’s first collaboration with the American sportswear giant. While initial speculation suggested that the projection may have been an elaborate stunt executed at the behest of the brand’s founders, Nike has since confirmed the hotly-anticipated partnership.

Marking a new milestone in its short, yet remarkable, history, this collaboration represents the most significant commercial undertaking for Corteiz since its inception in 2017. Details of the collection have not yet been released, but fans of both brands are eagerly awaiting more information.

Corteiz has established itself as one of the most sought-after streetwear labels in recent years, quickly ascending the ranks to reach those of heavyweights such as BAPE, Palace, or Yeezy. The brand’s unique communication and marketing strategies have captivated audiences and generated immense excitement for each new release, reminiscent of the fervor surrounding Supreme in the mid-2010s when shoppers could, and more interestingly would, queue for hours to put their hands on an item before it sold out within minutes.

Very much like its peers, Corteiz has successfully created a distinct vision and community around its identity and aesthetic, and this partnership with Nike is poised to bring the brand to an even broader audience although their relationship hasn’t always been as healthy and fruitful as it may be today. Rewind back to 2021, and both labels actually happened to be involved in a legal battle when the sportswear giant filed a lawsuit against Corteiz and Clint.

The action was taken as a result of the similarity of the London brand’s tag, to Nike’s popular Cortez sneaker, arguing that the homophone in the names could lead to confusion amongst consumers and potentially negatively impact them on global markets.

On March 16, 2021, the judge in the case ordered Clint to pay Nike a total of £1,850 GBP to settle the dispute. Since, it seems as if both parties have moved past the imbroglio, marking a new era for the two labels, especially with the unveiling of their shared campaign.

The reaction seen on Twitter has been laudative, with many expressing admiration and respect for Clint.

Corteiz put their logo on the Nike store in central London 🤣 idols become your rivals pic.twitter.com/DPMKMmxmkJ

When I saw the Corteiz X Nike collab announcement pic.twitter.com/M5YzuNldOx

I think they both need each other. Nike from a cultural aspect and corteiz because their customer service is abysmal. It’s a good collab https://t.co/glLOh09fo0