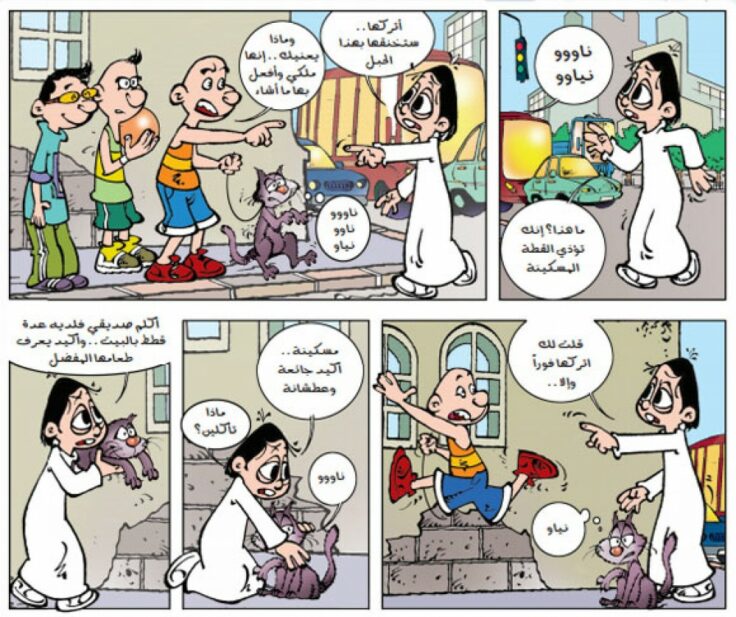 And how it has shaped our childhoods.

Almost every kid in the region has grown up reading Majid, myself included. The children’s magazine was a favourite read for many.  You remember: the anecdote-filled comics, light-hearted jokes and the source of every Arab kid’s general knowledge.

For me, it was my ultimate weekly indulgence. I remember being ecstatic whenever my parents and I drove to the local library to get the newest issue. My mother always laughed at how I would make my way through half the magazine before we’d made it to the front door. I was obsessed.

Bi Bi was my favourite character. She was audacious, a trouble-maker even. She lived for breaking the rules and having fun. Growing up as a very quiet and shy kid—I still am to some degree. Perhaps that’s why I loved her daring and chaotic adventures.

Ronaldinho was another one of my favourites. Only back then I had no idea that the pony-tailed super active boy in the comic was based on the actual Brazilian footballer. And of course, there’s the classic ‘Kaslan Jiddan’ (which means ‘very lazy’ in Arabic) who was constantly trying to be an adult but eventually always falling into trouble.

As I stepped into my teenage years, any memory of Majid became tucked away in an inaccessible corner or mind. That was until an IG post of a magazine cover that looked a bit too familiar to ignore unlocked a flood of memories. Seeing a big bright red headline that spelled ‘Majid’ in Arabic, my face immediately lit up.

I had no idea that Majid was still available to this day, certainly not that for a 2,136 issue. It was better than I remembered. The magazine, which has been in circulation since 1979, was now redesigned by none other than Beirut-based design agency Studio Safar.

I was overjoyed at the thought that children way past my generation were still able to enjoy the funny tales of Majid. Most importantly, though, the legacy of a regionally-created publication with Arab comics that aren’t Marvel or Anime continued.

The comic included wearing white robes and traditional thobes. It was filled with portraits and short writings of kids from Egypt and Lebanon to Syria and Morocco. And it was entirely in Arabic.

One of the issues that I had kept from my childhood is dated from 2009. I was 10 years old, a time by which I had already started learning English and French at school. I was lucky enough to still be reading Majid, knowing that for young Arabs who are usually thrown into learning foreign languages really early on, it becomes very easy to strip away from the language.

It’s an unfortunate reality that has only been exacerbated further in today’s digital world, where Arabic has little presence on the western-dominated platforms. But Majid’s resilience and continued presence after over 40 years might just be a spark of hope.