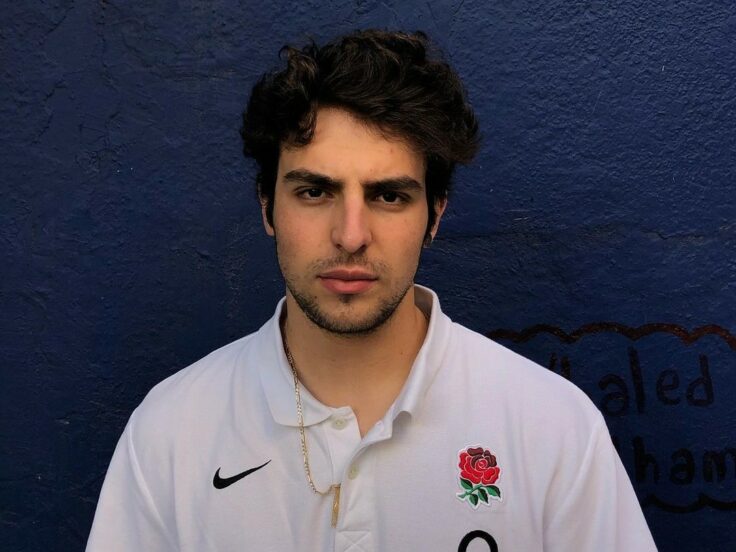 Activism and political militancy can be translated through all sorts of manners. That’s something that Marwan Abdelhamid has definitely understood well. Shooting with more than one string to his bow, it is quite hard to only put one label on the multifaceted artist.

Quite successful in most endeavours he decides to undertake, the Palestinian-Algerian flag bearer is certainly nothing short of talent—but it’s his music we’re putting the focus on now. He just released his latest single, Haifa In A Tesla, as an ode and lyrical tribute to his roots as well as ongoing events taking place in the holy land.

“Haifa in a Tesla is a manifestation song – a song that touches on our collective dreams of liberation and return to the motherland. For me, Palestine is not a trend, but rather a piece of myself and a responsibility to speak my truth. It’s a part of my identity that, whether I like it or not, shows itself in my art. “

Only a few months after Jerusalem’s quarter of Sheikh Jarrah gained momentum on the internet as a result of Israel’s illegal occupation, Marwan’s track, whose Levantine and French-Algerian tongue are sporadically thrown into his lyrics, is straightforward, flaunting a use of language that highlights his own personal story whilst reviving the Palestinian cause as a whole.

“I am the son of a French-Algerian mother and a Palestinian-Serbian father. French is my native tongue, but I grew up in an American school system and learned Arabic playing football in a refugee camp. All my songs are multilingual – it just represents who I am,” he says.

Speaking on his endeavor into the music world, he explains: “My goal is to build an empire, shift the culture and represent Palestine on a global level. Growing up, I always wanted to be a Palestinian ambassador (like my grandfather). What I realised later on is being an ambassador is not limited to public diplomacy – as an artist, I am an ambassador with the potential to influence the whole world.”

Some could argue that upholding both Edward Said and Bella Hadid as equal symbols of Palestinian resistance is unfair—Marwan argues that’s only the case if you dismiss the cultural context surrounding the figures in their respective time. The chorus name-drops both celebrities in a fuzzy auto-tuned voice that speeds up halfway through the track. Giving us almost no time to ponder over whether it is appropriate or not to make such a comparison. One thing is for sure:  it is at least an interesting one to say the least.

“Edward Said is my idol – I see myself in him. His way of articulating himself and shedding light on our struggles in the US at a time where it was extremely dangerous to do so is something I seek to emulate. However, I recognise the esoteric nature of academia, which is why I admire Bella Hadid’s work so much,” explains Marwan.

“She, unlike Edward, has direct reach and influence over millions and millions of human beings, and to use her platform to talk about the Palestinian struggle is incredible. These two individuals represent a duality that, I think, is the key to countering the years and years of anti-Palestinian racism that American media sources have fed their population’.

The animated visuals take us on a long journey to Haifa through the notoriously infamous Qalandiya checkpoint, one of the most saturated barriers known for frequent demonstrations and repeated clashes against the occupation. Accurately simulating the experience of riding through present-day Palestine while delving into a harsh reality that the songwriter knows too well, Marwan, who has already garnered hundreds of thousands of streams on his past 4 releases, is echoing another voice from the Promised Land that is also in crucial need to be heard.