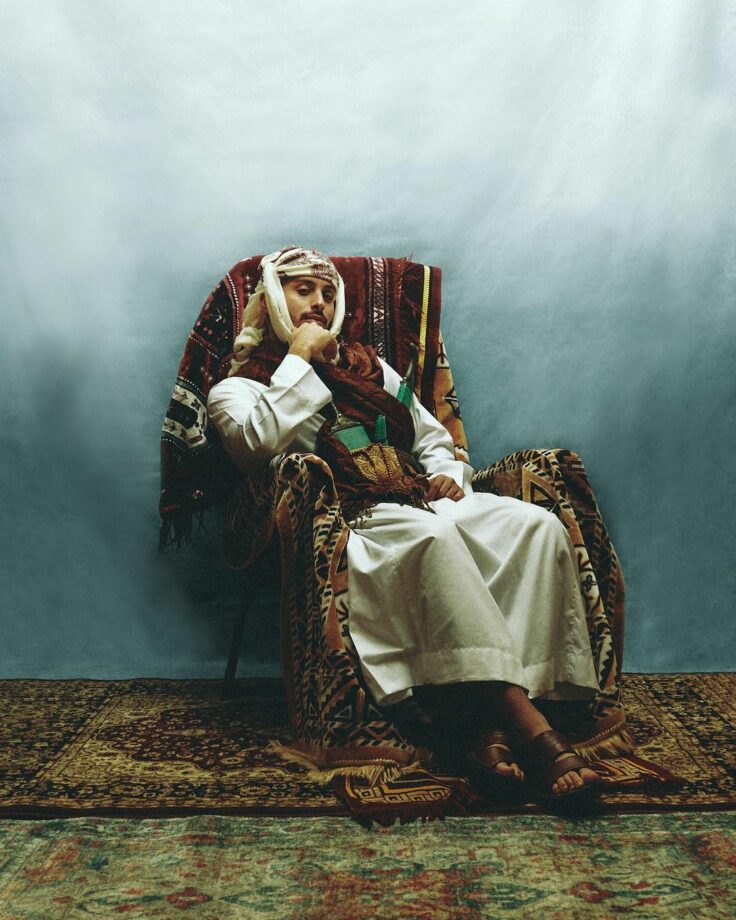 Last month, Bayou, with long-term friend and fellow artist Saint Levant, traveled from Paris to London to explore new horizons, meet new creatives, and work some magic from within the British capital’s long streets and wide avenues. After a successful debut show in Islington, where concert-goers enjoyed being serenaded by the Dubai-based singer’s silky vocals, Algerian-Palestinian Saint Levant’s wild energy, and Egyptian singer Felukah’s wavy tracks, the up-and-coming Egyptian artist is proving that, despite the abundance of rap in the Arab World’s burgeoning sonic landscape, other genres can still stand out — and that’s including the revival of RnB, of course.

When asked to describe himself in a handful of words, Bayou reveals that he is “an artist, songwriter, vocalist, creative, and even more that you will soon see.” Born in Jeddah, before moving to the US to pursue his education in Boston, the 20-year-old crooner never shies away from owning up to his Arab identity, always appearing close to his roots, which obviously also includes family.

“Bayou comes from my last name Bayoumi. It was actually a nickname given to my dad by his peers, I ended up taking it for myself. Since then it’s stuck with me and I feel like it represents me well,” he revealed.

Much like the stage name he carries, Bayou developed an interest in music when he was a mere child.  Today, his lyrics touch on a wide range of relatable topics, although love now seems to be at the forefront of most of his sonic adventures. Blending these heartfelt matters with elements of sound from back home, the rising artist is on a quest to test, try, and assert a musical identity that he’s harnessing as his very own through experimentation and a genre-less vision of melodies and tunes.

“I started songwriting when I was 8-years-old just for fun, but midway through high school I started recording and writing more conceptualized tracks– at first trying to imitate my favorite artists,” he shared. “Overtime, I started to develop a bit of my own sound by experimenting with fusing old Arabic music my family used to listen to with my favorite vibes from the West. Since then, I feel like I’ve been carving out my own lane making Pop and RnB with that Middle Eastern twist,” he added.

“My life moves with love. Love for music, for life, for women, for my culture, you name it. I feel like I’m able to express my love for different things best through music and that’s why it’s so prevalent. With that, love is a universal feeling and we all experience forms of it, so I use my music to document my different experiences in love and relate to others,” shared the King of Cairo artist.

Like most areas of the creative world, singing requires discipline, hard work, and a decent amount of ambition. Destined to become a professional football player, it’s only after a torn ACL that music became a primary focus as well as a tangible career path. Much like he did with his stint playing sports, Bayou is pouring blood, sweat, and tears into his craft to potentially become one of the scene’s most recognizable voices. Willing to give it everything he’s got to breakthrough the industry and make it, the pioneering talent has set his standards of success vertiginously high and although his numbers across his profiles are slowly starting to take off, he feels that his journey is only beginning.

“Before kicking my career off, all I wanted was to make music that resonates with me lyrically and sonically. Everything after that was a plus. Now that I have improved as an artist and started to gain an audience that anticipates what I do, it’s another thing to consider. I think of them, how they feel, and the experiences we share. I like to engage my audience while keeping it authentic for myself,” he said, adding, “Moving forward, I want to dive deeper into the Arab-infused sound; melding it in ways that haven’t been done before. I want to also share that sound outside of the diaspora and connect with our cultures, people, and sounds through art. Lastly, I want to step it up visually, I feel like there’s a lot people who don’t know yet about Bayou’s World and I am going to make sure they are visually welcomed into it.”

When asked about his goals, he revealed, “I really want to become a face for excellency in music and art for the Middle East. I feel like a great example of that is Ramy Youssef in film and acting. He’s an enabler and inspiration for me and I would love to work with in the future. I want to make music that resonates with myself and my people whilst achieving a global appeal. I believe that there is so much to uncover about ourselves, our heritage, and a lot to celebrate about being Arab and North African. I want my music to personify and illustrate those things.”