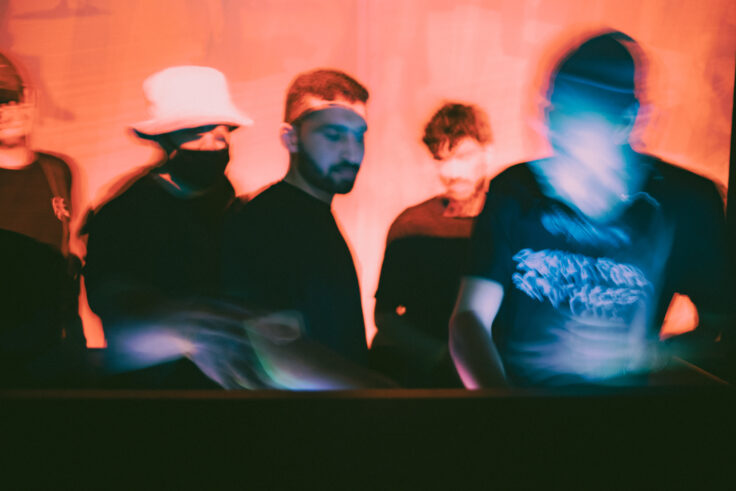 The only reason to leave your bedroom this week

Somewhere between Cairo’s mainstream nightlife circuit and now-epitomic chaabi drops comes the need for something that shakes things up a little. As a fan of the more leftfield music and events in the region, it never ceases to amaze me how Egypt’s capital continuously delivers innovative, exciting fresh ideas and talent. This coupled with a community-based DIY aesthetic makes it a music-aficionado’s dream.

With that being said however, it’s not without its pitfalls and drawbacks as there are the same issues that one might find in any creative community anywhere: egos, beef, and acknowledgement are omni-present regardless of country. But one crew who actively stays away from the usual bustle of the scene is MOSHTRQ.

MOSHTRQ consists of a number of elusive members, the kind of guys that stand around at the back of the event, chain smoking and commenting on the acoustics of the room, or the track ID from a 2007 garage mixtape. A relatively new collective, coming into fruition in December 2021, the crew is one of the newest, yet also one of the most active groups in Cairo, having hosted six events over the course of just one year.

“The events are more of like a look and overview of the Egyptian alternative club scene.We’ve had rap focused nights, we’ve done club nights, and we have also hosted live bands and sound design artists,” said MOSHTRQ’s crew member Yaseen Azzouni. “We had a massive lineup of live acts and DJs from across genres and the Egyptian scene, some true heavyweights like Hassan Abou Alam, ZULI, Rama, and Assyouti. We’ve even put an art exhibition in our last event so we can champion the work of local artists like Kafrawy, WeirDo, and Dalila Hassanein,” he added.

Azzouni himself started performing at the tender age of 16 at Cairo’s now infamous VENT club nights. For the uninitiated, VENT was the best underground night in post-2011 Egypt, pushing forward the sounds of a young Wegz, Marwan Pablo, and Shabjdeed, just to name a few. Let alone the countless DJs the decks saw. Eclectic sounds and mashups were regularly on the menu, something that MOSHTRQ have also embraced.

Like most things in the Cairo underground, it’s organic and visceral. “All of the MOSHTRQ crew are elusive by nature,” said Azzouni. “We’re homies, but really low key, we’re not out that often. I only really leave the house when we’re going to either play shows or support our friends.” And, he’s not wrong. The guys themselves keep nondescript, enigmatic social media accounts.

“What the vision is, you can ask any one of us, and we’d probably give you a different answer, which is one of the most wonderful things about the project.”

Crew member and DJ, Karim Serry, recently had a radio show that was lightyears away from the music he DJs. Postdrone, another member, released an ambient record, which is the complete antithesis from the deconstructed jungle of his first release.

“There’s a lot of overlap,” says Yaseen, adding “especially when it comes to club music. There’s a lot of stuff that we play together, but as far as one thing that anchors us, I can’t say we really identify with one singular genre.”

For the crew’s upcoming event, they’re taking it from the confines of an indoor space and opting for an outdoor area. “Getting out of a ‘club’ environment was an important step for us. It gives us a lot more freedom to play around with set design and lighting to provide different experience for the people in the crowd. You’ve got to keep switching it up on them, you know?” mused Yaseen, clearly proud to celebrate the collective’s first birthday.

The upcoming event entitled MOSH BAYEN is set to take place on  Dec. 15. The event promises a bass-heavy journey through club, rap, and experimental bass, and as always with a Cairene theme. Headlining the line up is Hyperdub record’s very own Angolan ‘Rough Kuduro’ pioneer Nazar, MOSHTRQ crew members Karim Serry and Ashrar, and Egyptian experimental-rap newcomer Logical Da9ud’s debut show. The opening spot is stationed by one of KHABT Recordings’ homegrown DJs, LP Fulano.

And, given the gravitas of that line up, it’s not surprising why MOSHTRQ are moving locations. “The kind of show that this lineup demanded required a different setting,” concluded Azzouni.

The upcoming event is certainly Cairo’s hottest ticket this week, so head over here to make a reservation.