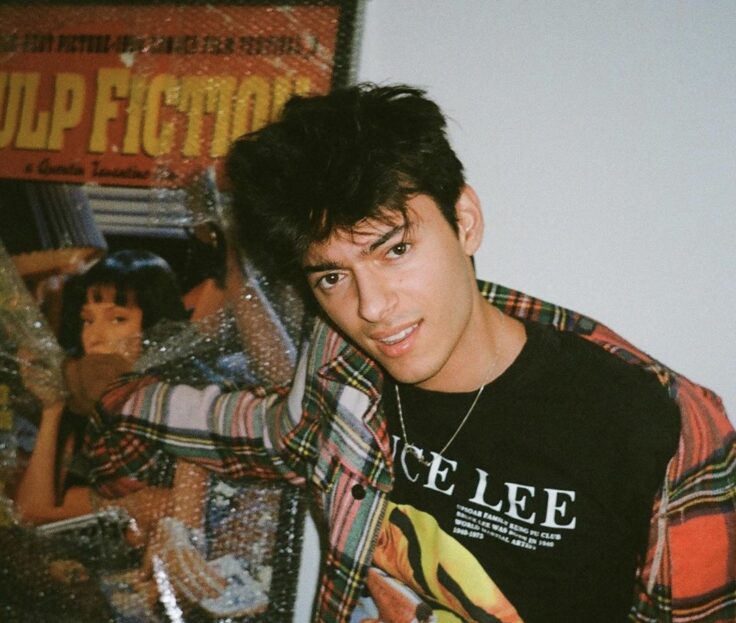 There’s something about lo-fi music that just draws its listeners in. Perhaps it’s the subtle, soothing rhythms, the oddly-familiar, gritty feel, or the typically personal lyrics that accompany the ambient tunes. Chances are, it’s all of the above.

And so far, far and few Arab artists have mastered the genre. There’s the Algerian Lolo Zouai, of course. But we’re here to introduce you to Saudi Arabian lo-fi maven, Mishaal Tamer.

If u see someone without a smile, give them one of yours.

The young artist has already garnered a major fanbase in the region and beyond, counting 143,000 followers on Instagram and millions in YouTube views. He also counts over half a million monthly listeners on Spotify. One of his songs, ‘Kid Goku’ has been streamed over 8 million times on the platform; and that’s just the beginning.

Using an Xbox microphone, an old guitar and his soothing vocals, the 20-year-old artist—who goes by the mononym Mishaal— dropped his first song ‘Arabian Knights’ last December with an accompanying video he shot in Jeddah. The track, in which he sings in Arabic, Spanish, and English, garnered three million views on YouTube, and millions in streams on Spotify.

Its success solidified music as his chosen path. The Jeddah native dropped out of NYU’s prestigious Clive Davis Institute, and it didn’t take long for creative journey to really kick off.

Born to a Saudi Arabian father and Ecuadorian mother, Mishaal uses his cultural influences as part of his musical process. Whilst he sung in both Arabic and Spanish in ‘Arabian Knights’, his cultures make themselves present in his beats as well.

“If you hear songs like ‘Arabian Knights’, it has lyrics in Arabic and Spanish but also going forward, if you listen a little bit to the beats as well, there’s always a rhythm that comes from the Middle East. I also use a lot of melodic structures that comes from South America and Ecuador,” he told Manila Times.

His influences continue to be seen in his later tracks. In 2020, Mishaal dropped three singles: ‘Friends’ in May, ‘I Don’t Wanna Wait For Summer’ in June, and ‘Mister Mister’ in July. In all three, Mishaal stayed true to lo-fi’s ethos: they’re deeply personal.

‘Friends’ was written by Mishaal in the heart of the pandemic, with the lyrics touching on the feeling of isolation the world felt due to the lockdowns. “The song was written here in New York about me wanting to go back to Jeddah,” he told The National.

“It was written during the quarantine time that we are all living in and the fact that I couldn’t be back home, especially in Ramadan, made me miss my family and friends even more. This song is very nostalgic and it is almost like a dedication to them.”

‘Mister Mister’ is a song about a loved one who struggled with addiction. “This person never got to hear it, but I want this song to help someone who might be struggling to not let the monster inside win,” he explained in an interview.

And this September, he proved he has no plans of slowing down. The singer released his latest track ‘Peddle Bike’.

He also announced his plans to release his first EP, ‘Life’s a Ride’. If his earlier projects were of any indication, we can’t wait to see what the young singer has up his sleeve.