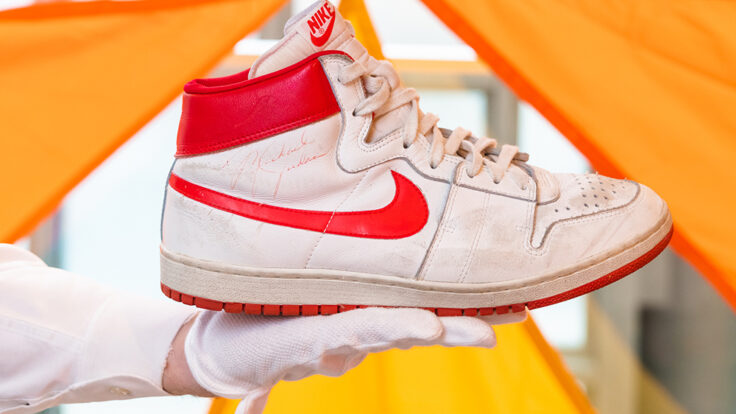 7 of the Most Expensive Sneakers Auctioned in History

It’s no secret that streetwear has dominated the fashion scene for the last decade. What might be a bit shocking though, is that a sneaker could set you back a million dollars—if not more.

No, we’re not talking about your typical resell market. We all know that Supreme, Palace, Bape and Nike regularly see their products resell for over 300 percent, with certain sneakers seeming as good as gold in some people’s eyes. Don’t worry we’re not here to judge.

Now, we also all know that you can’t put the same shoe on everyone’s foot, but some cleats are just far too precious to wear anyway. Beyond your typical hypebeast sneaker, there’s an entirely other market we’re here to introduce you to. Here are the seven most expensive sneakers ever sold, and the story behind them all: 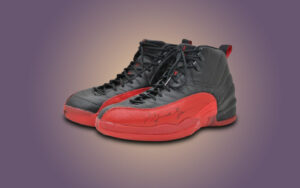 These probably belong to a museum. Worn by the legendary Michael Jordan himself at his famous “Flu Game” back in the finals of 1997, the pair initially started auctioning at $5000 before selling for over $100,000.

The shoes were owned by a certain Preston Truman from Salt Lake City who asked MJ for his boots after his infamous game against Utah Jazz and kept them safe in a safe deposit at a state bank for over 15 years. 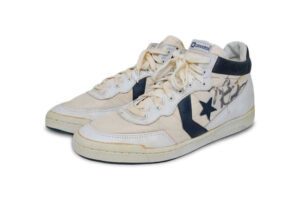 1984 marked the second time the City of Angels, Los Angeles, became the host of the Olympic Games. That year, the American basketball team managed to secure a very rewarding first place position.

At an auction in 2017, Michael Jordan’s autographed pair of shoes from that medal-winning summer went up for sale and a lucky buyer managed to put his hands on Jordan’s last pair of Converse before switching to the tick brand. 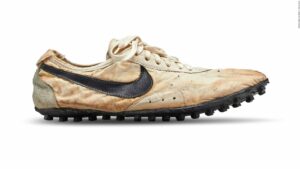 Sold for $437,500 at Sotheby’s New York in 2019, the pair is a handmade running shoe designed by Nike co-founder Bill Bowerman in 1972. Drawing its name from the famous footprints left on the moon by astronauts in 1969, the shoe is a collector piece as only about 12 pairs of the Moon Shoes were created and even less than that today. The pair auctioned is the only one known to exist in an unworn condition. 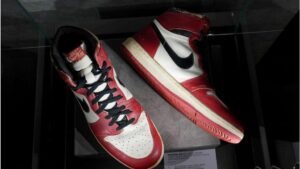 Air Jordan 1s can probably be coined as one of the world’s most popular and iconic pair of trainers. The signature red and black autographed pair of shoes were worn by the emblematic Chicago Bulls player himself and were sold for more than three times the original estimate. 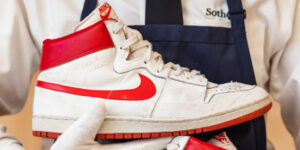 Just last week, another pair of Michael Jordan shoes broke the market. Sold for around $1.5M, the signed pair is believed to be, according to Sotheby, from Jordan’s fifth NBA game in his rookie season back from 1984. 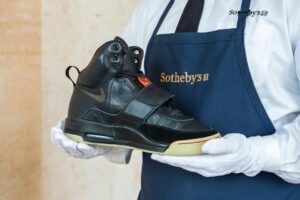 First seen on Ye’s feet at the 2008 Grammy Awards, the black-leather high-tops are believed to be the first pair of shoes to break the $1 million benchmark while setting another record for the industry. As one of the first iterations of Kanye’s Yeezy collection, their specialty resides in the fact that Nike no longer manufactures them as Adidas took over and signed the trend-setting artist. 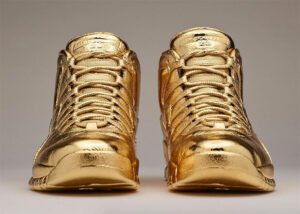 Topping the list is a pair that barely any of us could even think of buying. It was reported in 2016 that a gold-coated pair of OVO x Air Jordan 10’s were purchased by Drake – a one-of-one custom that we can only dream of having at home. Crowning himself with THE ultimate pair of trainers of all time, the flashy shoes were handcrafted by Matthew Senna and although they are deemed to be unwearable they seem to be the perfect decoration to have in your living room for sneaker-heads.