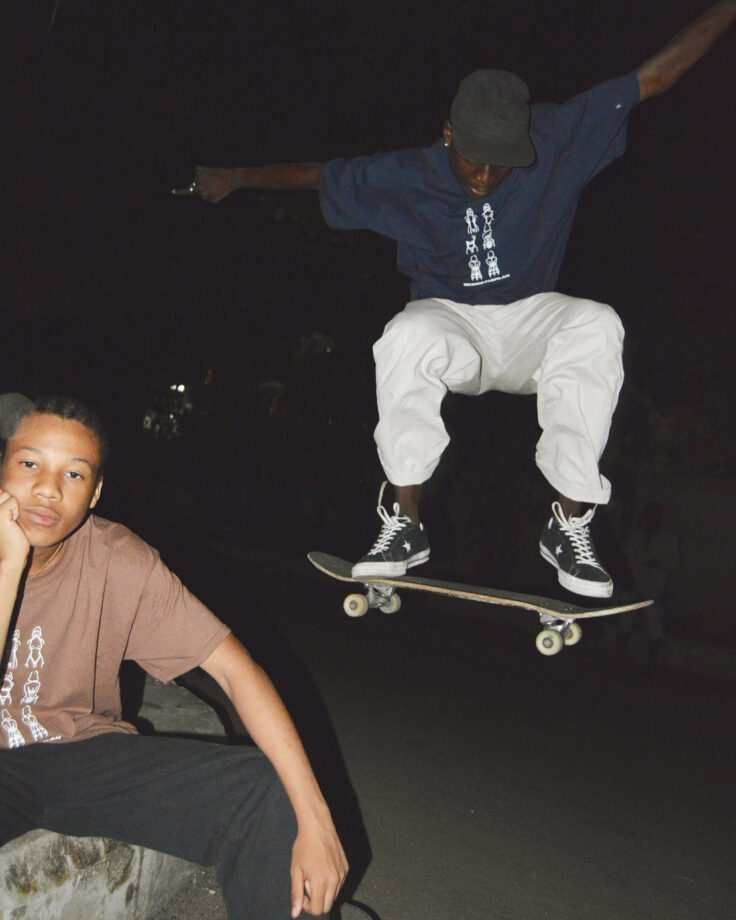 With Arise Fashion Week attracting some the fashion industry’s biggest names like Naomi Campbell and Ozwald Boateng and Imaan Hammam, and Homecoming drawing in some of the world’s biggest rappers like Skepta and Odunsi—there is no denying that Lagos is having a major moment right now.

The Nigerian capital is undergoing a cultural renaissance, with a creative spurt taking over every corner of the city. And it’s not just the mainstream fashion and music scene that have been drawing in all the attention –  on the streets there’s one streetwear brand that’s at the core of the city’s skateboarding scene: Motherlan.

Founded by skaters Obikwe, Ehi, Leonard, Slawn, Jamal, Onyedi, Nathan and Max in 2016, the collective has made major waves over the last few years, releasing their first collection in 2017, featuring pieces made of traditional Nigerian fabrics and patterns. The collective have gone on to hold pop-ups in London and Lagos and have since collaborated with former Supreme Brand Manager Angelo Baque on his brand Awake NY.

By 2018, the brand’s identity became clearly defined. True to its roots, as its name infers, the Motherlan implements distinctly Nigerian elements in all of their designs, as seen in their Witchcraft Tee—a reference to the relevance of the belief system in West Africa.

The same formula was applied once again for their latest drop, with a design of a Nubian queen imprinted on t-shirts and sweatshirts.

Happy Birthday To Max! We Love You To The Max!

And whilst a strong focus is put on the label, the collective behind it are equally engrossed in pushing Lagos’s skate culture forward, giving the world a look inside the local scene with their first skate film, Edward, which was released in February.