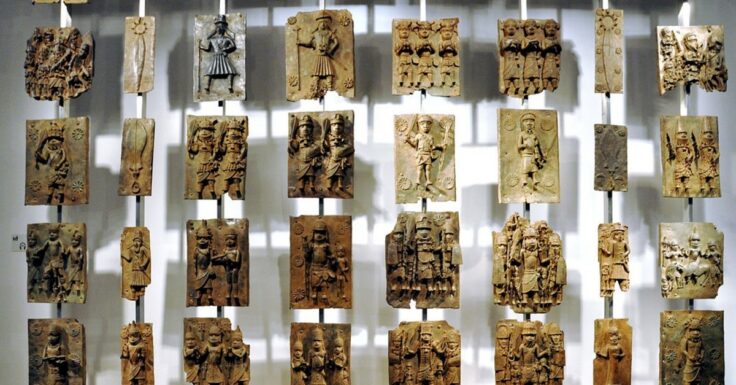 Artists Are Calling For Museums to Return Stolen African Artifacts

According to UNESCO experts, 90 per cent of Africa’s cultural property was looted and is now located overseas. You’ll find most in European and American museums—among the biggest culprits: the British Museum and the V&A in London as well as the Metropolitan Museum of Art in New York, and in Washington DC’s National Museum of African Art.

Items can also be found in smaller institutions like the Spiritan Museum of African Arts in the relatively small region of Drome in south-eastern France. African art’s prevalence in the West is irrefutably immense, and the institutions where they sit rarely recount the violent forms through which African art was acquired—making the case for their return.

With the Black Lives Matter movement garnering incredible momentum over the last few weeks, leading to the removal of statues of confederate soldiers in America (like Robert E Lee in Virginia, and that of a slave trader in Bristol), artists and activists are now calling for the return of African artefacts by European and American institutions—all in the name of dismantling white supremacy and historic white-washing.

“Let’s take the energy from Bristol to the @britishmuseum and the @vamuseum . Reparations are due. And until they are returned, they must change the labels and descriptive texts to truthfully describe the violent force of whiteness by which these objects were stolen. Image caption: decapitate white culture,” wrote Turner-Prize winning Lebanese artist Lawrence Abu Hamdan in an Instagram post.

“@venetia_porter and @racheldedman and anyone who works in such institutions! It is vital that you work towards changing the narrative and texts so that you educate rather than obfuscate the history of white supremacy you display. Diversity is not enough; it is the history of white culture that first needs to be accurately explained,” he continued.

Demands of the return of African art are anything but new, In 2009, Egypt’s Supreme Council of Antiquities demanded that the Louvre return four archaeological relics stolen in the 1980s from the tomb of Tetaki in Luxor. In 2012, Nigeria’s National Commission for Museums and Monuments urged the return of 32 ‘Benin Bronzes’ artefacts that were looted during the Benin massacre in 1897, to be returned by the Museum of Fine Art in Boston. The British Museum is also home to numerous Benin Bronzes. In 2018, the governor of Easter Island, Tarita Alarcon Rapu demanded that the British Museum return a statue that was stolen in 1869.

The British Museum recently came under fire for performative activism after releasing a statement in solidarity with the Black Lives Matter Movement.

This is a ridiculous statement. NO mention of the sheer amount of looted African art, history and culture in museum institutions, but instead I guess implying maybe putting a little more of the stolen stuff on display!?!?!?!? will make them better???!!???!!?! What???? https://t.co/8ob2biUuUz

“The British Museum IS colonialism. It IS made up of plundered objects. It is a shrine to power, control and Eurocentric curation,” wrote one user.

In his 2018 book  Who Owns History? Elgin’s Loot and the Case for Returning Plundered Treasure, human rights lawyer Geoffrey Robertson wrote that “the trustees of the British Museum have become the world’s largest receivers of stolen property, and the great majority of their loot is not even on public display.”

He criticized museums all across the globe, particularly ‘encyclopaedic museums’, “that lock up the precious legacy of other lands, stolen from their people by wars of aggression, theft and duplicity.”

Robertson’s words were amplified further upon the British Museum’s statement. Oxford Professor of Contemporary Archaeology, Dan Hicks, wrote in response: “These are hollow claims while the British Museum continues to deny requests for the permanent restitution of the Benin Bronzes—taken in 1897 in a military attack in which tens of thousands of Nigerian people were killed, and exhibited ever since as a monument to that “victory”.