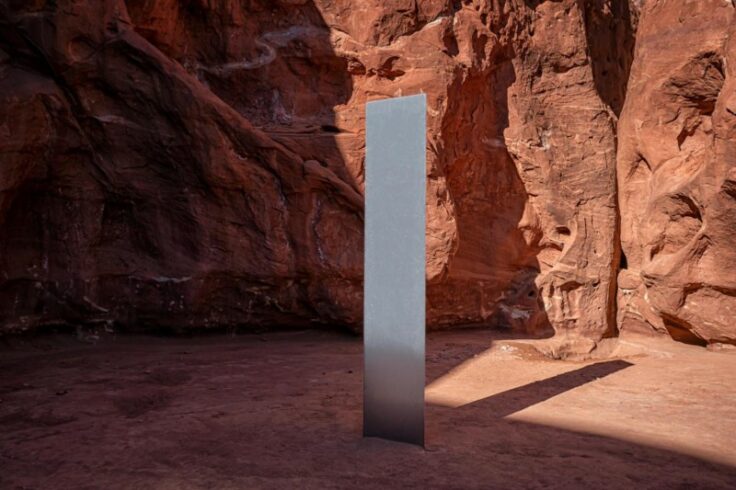 Just when we thought this year couldn’t get any closer to a sci-fi thriller, not one, but two massive metal monolith were discovered in the middle of nowhere.

The first monolith was first found in the Utah desert. The structure, which is over three-metre-tall, was first spotted by Bret Hutchings, a helicopter pilot helping count sheep in the remote area. “That’s been about the strangest thing that I’ve come across out there in all my years of flying,” he told local news channel KSLTV.

Utah’s Aero Bureau of the Department of Public Safety released a photo of the object on their Instagram but didn’t reveal its exact location. As soon as the post went viral, people began investigating and coordinates started circulating on Reddit, with no certainty on their accuracy.

More claims revealed that overviews of Google Earth show the monolith had been there for years before its recent discovery.

The monolith immediately drew comparisons to the one featured in Stanley Kubrick’s 1968 sci-fi film 2001: A Space Odyssey, and works of minimalist sculptors, including late artist John McCracken. In fact, his gallerist David Zwirner, told the New York Times that it could actually be a McCracken piece.

“The gallery is divided on this,” he said. “I believe this is definitely by John. Who would have known that 2020 had yet another surprise for us? Just when we thought we had seen it all. Let’s go see it.” The monolith also sparked some conspiracy theories about whether this could be the work of aliens, with an endless number of memes flooding the internet since its existence was made public.

If that metal monolith in the Utah desert was not left and then disappeared by aliens, 2020 did not fully deliver.

The Utah #monolith has disappeared. pic.twitter.com/lIArt6GOIo

To everyone’s surprise, the metal structure then disappeared from the site on December 1, with no trace of it to be found. Photographer Ross Bernards and his friend, Michael James Newlands, unveiled exclusive photos of the monolith on the night of its disappearance, showing a group of four men toppling it down and removing it from the area.

“It must have been 10 or 15 minutes at most for them to knock over the monolith and pull it out,” Newlands told the NYT. “We didn’t know who they were, and we were not going to do anything to stop them.” All that is left now is some rocks and a triangle piece of metal, according to photos shared by visitors.

The "monolith" obelisk met a swift fate before we arrived. Only the triangular top remained as well as parts of the below-ground base. If I ventured a guess, it was probably dismantled by someone determined to prevent careless curiosity that tends to ruin alluring sites. pic.twitter.com/kXP5KypmlS

And while one mysterious monolith was enough to spark all sorts of theories, a second one appeared in Romania’s mountainous Neamt county on November 28 and then disappeared after just four days. The metal structure is speculated to be a copycat of the Utah one, aimed to create buzz and attention.

“The 2.8-metre-tall structure disappeared overnight as quietly as it was erected last week,” Romanian journalist Robert Iosub told Reuters. “An unidentified person, apparently a bad local welder, made it … now all that remains is just a small hole covered by rocky soil.”

Is it the work of aliens, artists, or local pranksters? There’s no way to really know. But one thing for sure, 2020’s surprises might be far from over.