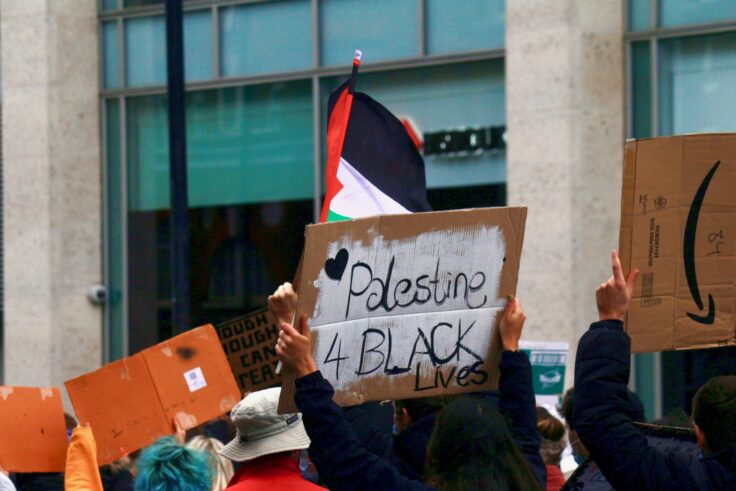 Fighting for equality, justice and freedom

Over the last few days, posts linking police brutality in the US with the Israel Defence Forces (yes, the U.S police force is trained by Israel) have flooded social media. Parallels between the death of George Floyd and the killing of an autistic Palestinian young man at the hands of the Israeli police earlier this month have also been drawn.

Naturally, in showing solidarity with Black Lives Matter in the MENA region, we should each be calling for an end to systemic and casual racial discrimination against black people and abolish the Kafala system. As well as actively educating ourselves on how we have historically contributed, and benefitted from anti-blackness. It goes without saying that this isn’t a time to compete or compare narratives. This is a time for Arabs to join forces and resist against all forms of racism and oppression, globally.

The struggle for Palestinian rights has long been connected to the Black Freedom Movement. Black activists and scholars such as Angela Davis, Alice Walker, June Jordan and James Baldwin have spoken out countless times about the intersectionality of these global struggles by creating connections across racial boundaries. “Palestinian activists have long supported Black people’s struggle against racism, as I pointed out. And I’m hoping that today’s young activists recognize how important Palestinian solidarity has been to the Black cause, and that they recognize that we have a profound responsibility to support Palestinian struggles, as well”, told Angela Davies to Democracy Now on June 12.

In a nutshell, both countries were founded on ethnic cleansing, colonialism and the forced notion of white supremacy. In Palestine, The Nakba (which literally translates to ‘the catastrophe’), refers to the mass exodus of 750,000 Arabs from Palestine, following the foundation of the state of Israel in 1948. And on May 28 of this year, Israel’s Prime Minister Netanyahu expressed his commitment to annex parts of the West Bank in July, once a joint Israeli-US team completes mapping the exact territory. This means he would illegally declare that the piece of land outside its borders is now part of Israel.

Black Lives Matter has also continuously denounced the US government for its support of Israel. Back in 2016, the organisation—which was founded by Alicia Garza, Patrisse Cullors and Opal Tometi in 2013— published a manifesto, which read, “The US justifies and advances the global war on terror via its alliance with Israel and is complicit in the genocide taking place against the Palestinian people.” They also called for boycotts and sanctions against Israel.

If you are pro-Palestine, you should automatically be pro-Black Lives Matter,  and vice versa. The very embodiment of intersectional solidarity is when we join forces and fight against similar structures of oppression.