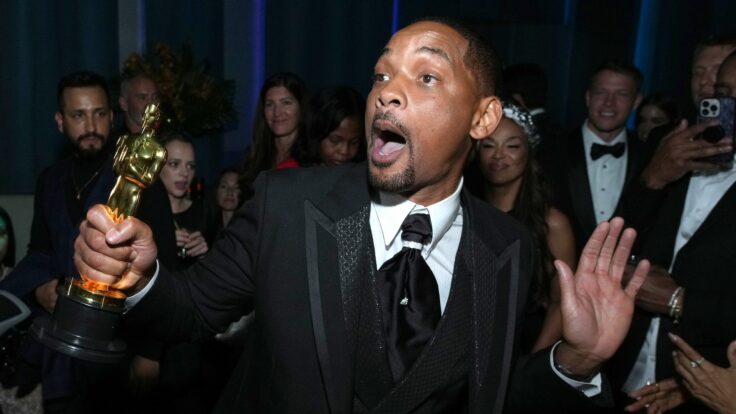 Is violence ever the answer?

The Academy Awards always come with a slew of headlines that follow. This year’s edition was of no exception. But “Will Smith Slaps Chris Rock on Stage” was the event’s most shocking moment, leaving no space for the year’s wins to even be celebrated.

The moment happened after Chris Rock, who was presenting the award for best documentary, joked about Jada Pinkett-Smith. The joke, which referred to her as “G.I. Jane” referenced her shaved head, which is said to be due to her struggle with alopecia, an autoimmune condition that leads to hair loss.

In the frame that followed we can see Smith smiling and Pinkett-Smith shaking her head.

A few instants later, Smith was on stage and hit the Oscar’s 2022 presenter for the whole world to watch.

“Will Smith just smacked the shit out of me” Rock says after Smith got on stage. Smith returned to his seat and exclaimed, “Keep my wife’s name out of your f***ing mouth.” Viewers speculated whether the move was part of the show, but were quick to note that it wasn’t, after the show’s audio was promptly cut off after the assault.

The incident marked the first time there was real violence on the Oscars stage. Not long after, Smith was back on stage to accept the best actor award for his performance in King Richard. In his speech, Smith compared himself to his character Richard Williams, claiming that he would do anything to protect his family, followed by an apology to the Academy and other nominees, but not to Chris Rock. According to the Los Angeles Times, Chris Rock refused to file a complaint against Will Smith over the slap.

As is the natural course of the internet, it went ablaze with reactions. Some reacted in horror to the assault, condemning Smith for resorting to violence over a joke. Others claimed Smith’s actions justified with claims that his jokes against Pinkett-Smith were out of line, particularly due to the sensitive nature of conversations surround women’s appearance, and especially black women’s hair. Some twitter users even celebrated Smith’s aggression. A tweet calling it ‘legendary’ has garnered over 156,000 likes at the time of writing.

On the other hand, it’s also been argued that Smith’s actions were merely a display of toxic masculinity, and a perpetuation of the idea that women need protecting. For many, the act of violence is seen as completely unwarranted and uncalled for.

Actor Judd Apatow also took to Twitter to condemn Smith. In a now-deleted tweet he wrote: “He could have killed him. That’s pure out of control rage and violence. They’ve heard a million jokes about them in the last three decades. They are not freshman in the world of Hollywood.” Apatow’s comments were not well received as he was recipient to backlash regarding his relationship with actor James Franco, who was previously amidst sexual harassment allegations by five women.

judd apatow talking about violence and rage after a tiny slap but not about continuing to work with james franco after multiple instances of him being violent against women pic.twitter.com/AYkbXIXPbC

Some users argued that Smith should have been removed from the theater after the assault, indeed in any other public place, violent behavior should be stopped and addressed. Yet he was allowed back to his seat and soon after accepted the Oscar for Best Actor. As it appears, the public discourse on the matter is still scattered, so we’ve gathered a few takes.

Words are absolutely a form of violence. Emotional and psychological violence are real, especially as they are systemically used against Black women and disabled people. Do not belie that in any of your "takes."

“The fact that men often mix being caring and being violent has made it hard for everyone in our culture to face the extent to which male violence stands in the way of males’ giving and receiving love.”
– bell hooks

All jokes aside, what Hollywood will see in the next few days are Chris and Will protecting each other in front of the press because as Black men, especially creatives, we exist in a white environment where we can’t afford to be portrayed as aggressive or unhinged.

Everyone at the Oscar’s when Will Smith assaulted Chris Rock on national television #Oscars pic.twitter.com/VX7EzFyJ22

Will Smith gonna have to hit the audience with one of these #Oscars pic.twitter.com/fC0R8RpERP

will smith: “i want to be a vessel for love”
will smith 10 minutes earlier: #Oscars
https://t.co/Oo3l0vRX4y

What really happened with Chris Rock and Will Smith in The Slap at the Oscars 😂 pic.twitter.com/r3v1WrB2aL

everyone sitting in the room silently as will smith slaps the shit out of chris rock #Oscars pic.twitter.com/cHE9hocFsn

We would love to hear your thoughts, head on our Instagram to participate to the conversation.